After making his successful 2006 film, Who Killed The Electric Car, director Chris Paine was elated to learn the auto industry was finally committing to electric cars (EVs). "I thought, wow, I'm never going to see this again in my lifetime - a renaissance, an industrial revolution. My team already had access, so we decided to bookend this as a story of reconciliation." 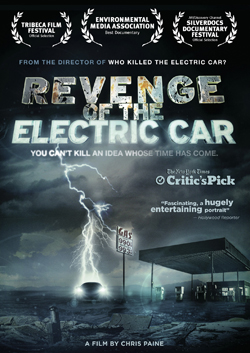 I met with Paine to talk about his new film, Revenge of The Electric Car. Lanky, Lennon-ish and long-haired, I'd admired him after seeing his first film, which identified villains. His new film reveals four heroes, and as I sat across from him I thought, "He's one himself."

The four he features come from each of the four areas where EVs are being made: Detroit, Silicon Valley, international and conversions. Each man takes huge risks to escape from the gas engine. Two went through their personal capital and put their health at risk. Two others are gambling the livelihood of thousands of plant workers. All are risking their reputations by betting we will become environmentalists choosing rechargeable batteries over gas. Or at least show national loyalty by sending no more money to Saudi Arabia. 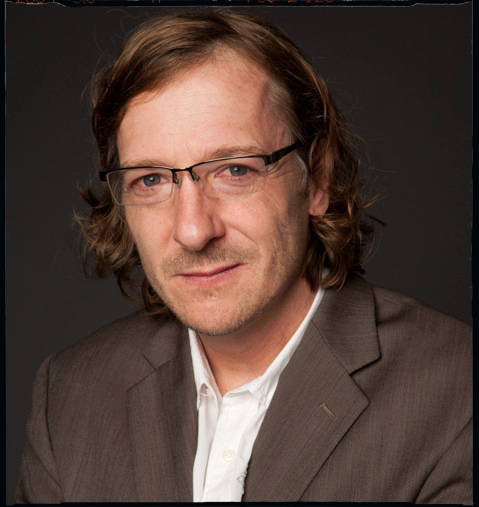 He's the film's most charismatic character. It's arguable that he and GM killed their electric car, the EV1, because they'd made a limited number (nearly 1,200) to meet California's regulations. He was a global warming basher then, but now he's backing EVs because he knows they made a mistake and this is the right thing to do. Besides, they didn't have a product to sell when gas hit $4 and $5.

GM's Chevy Volt costs the equivalent of $1 to charge at night. When I was at the Hamtramck plant, one out of every seven cars rolling down the two-mile production line was a plug-in.(Hamtramck borders Detroit.)

Danny DeVito appears in this film, raving about his new Chevy Volt. He was among the avid California drivers who howled when their leased EV1 cars were recalled.

A more chaste Lutz now says, I suggested the electric prototype, but it lost a ton of money. Now the electrification of the car is a foregone conclusion.

Explaining Tesla's fitful start, Paine says, It takes a lot of money, I mean a LOT of money to put a car on the road. After all, if I'm going to put my family in it, it had better be reliable...and safe.

So Musk was paddling upstream for years. With the Great Recession mucking up the money stream, a divorce, five little boys at home and his two companies to run - Space X and Tesla - a bewildered Musk admits:

I wasn't sleeping. I was losing my health, then I came close to a nervous breakdown. I wondered if I was going crazy. I mean does anyone who's crazy KNOW he's crazy?

Resorting to the unthinkable, an embarrassed Musk called a meeting of customers who'd been waiting a year after paying $100,000 for their cars and found the guts to askT them to anti up more. This meeting is in the film.

Hope brought results when the U.S. Department of Energy promised Tesla a $485 million loan, to arrive in four months. But it didn't show up. Desperate, Musk appealed to Wall Street, offering his company to the public. Enough money was raised to finish cars, build more, and rescue Musk from insanity. Then the D.O.E. loan and one from Daimler came through. 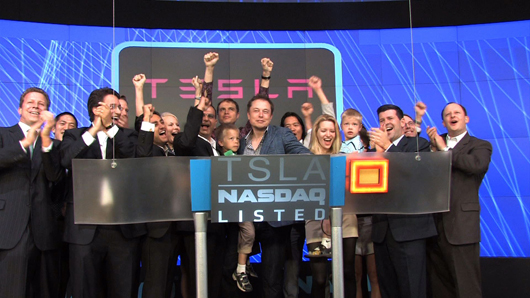 Wall Street Journal's Neil comments, "Ghosn isn't a visionary; he's a capitalist. He doesn't get up in the morning unless there's money in it."

Ghosn surely saw an opportunity in Paine's film. Allowing Paine free reign, we follow Ghosn into his conference room for a high-powered meeting. And what other Western journalist has questioned Ghosn in his limousine? Ghosn is betting that Nissan's 100-mile range all-electric Leaf will out-flank his competitors, saying:

Our car's big difference is that it's affordable and mass marketed. You're going to find it at every dealership in every country. We are not appealing to the long-distance driver. And is this about global warming? The issue is not whether global warming is a man-made fact. The issue is that the public is expecting us to present technology that can respond to these concerns. 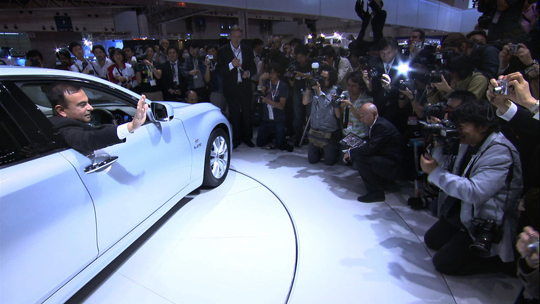 Paine chose his fourth hero, Greg "Gadget" Abbott, "because he's my neighbor and because he represents the hundreds of home-based engineers who retrofit cars with lithium ion batteries." Gadget lost his workshop when an arsonist set it ablaze, melting his tools and most of four cars (one, a Porsche). With loans from friends, he bought an old building, but after needing inhalers to work there, he discovered the place was highly toxic. A third start has begun. 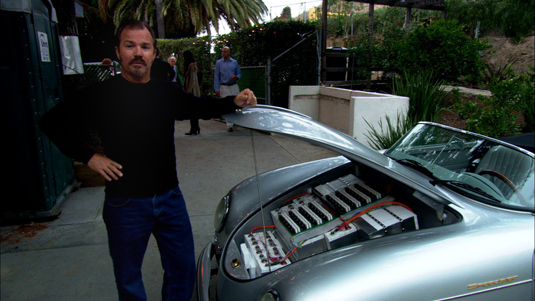 Paine is now driving a sleek white Tesla Roadster with a black top, #23 to be exact. "Now more than ever, the car represents freedom," he says, suddenly looking up and away. "It's Susan Sarandon zooming off in the sunset, untethered from oil and from all that pollution," he says.

DVDs are now available from the film's web site, Amazon.com, and other online sources including Netflix. The film is still in theatrical circulation.