Our Earth is in terrible trouble. Every day I try to figure out what I can do to help. Sometimes it seems like recycling, turning off lights I'm not using, and riding my bicycle instead of tooling around in my gas-guzzling machine aren't enough. So when I got Reverend Billy's book in the mail, I rejoiced. He is a true visionary when it comes to our planet. So now that his book, The Earth Wants You, is coming out, I thought I would pick his brain to see what he has to say about the whole thing. 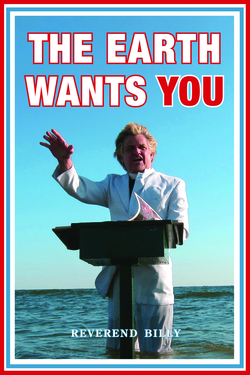 David Henry Sterry: Why did you decide to write this book?

Reverend Billy: I discovered that under the surreal conditions of 2016, to write powerfully on the page is the same thing as an act of civil disobedience on the street. And the thing that good writing and activism share is the slimy, scary spiritual life of the Earth.

A small number of people over a short period of time (a couple centuries) have turned the Earth's behavior into science fiction. We're trying to get the Earth to be a character in a human drama; get it to act like a world war, or an angry god, or the ultimate criminal artist. So I wanted to join the resistance to casting. This means dodge the smoke and mirrors of the "Environmental Movement" and going straight to the Earth.

The Earth is saying something to us and we have to learn that language and speak it and write it down. I wanted to be the ghost writer and let the Earth be the author.

DHS: What exactly is the Church of Stop Shopping, and how do I join?

RB: You join by letting your own drama out. Let's face it - Consumerism is designed to make us feel fabulous when we're dull and derivative. Consumerism is a con-job. I have seen people run toward us across super malls like we were the Taliban, and all we were doing was singing gospel in the back aisle with the phrase "Stop Shopping" in a nice harmony. Consumerism is like a fundamentalist religion. 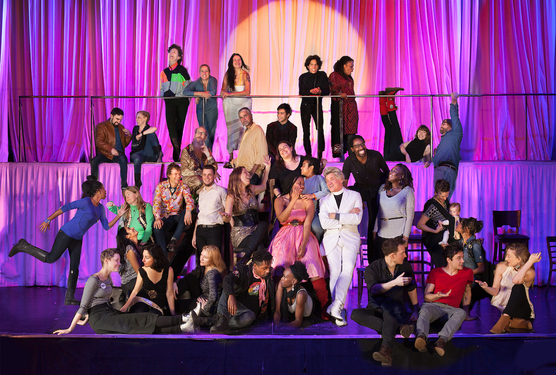 DHS: I love how in your book you say that the Earth talks to us. Why do you think it's so hard for us to listen?

RB: Consumers listen to products. Militarists listen to sentimental patriotism. Religionists listen to Gods that aren't there. In the West, we've got products, patriotism and gods screaming at us all at once. We have a lot of white out here.

But even though we have forgotten how to listen to the Earth, the Earth never stops singing its song to us. It's still there. Of course, we listen to nothing but the Earth before we're born, and after we die - and so we always have this familiar feeling from the scream of a hawk or the ghostly fingerprints of a caress.

Our ultimate radical instruction is never far away, our life is earthy, even in the heart of New York. We can leave our computers, walk outside and look around, and the wind is waiting with its lovely snake of vowels.

DHS: Why should we stop using products from Monsanto? Is it okay to hate weeds?

RB: I'm a weed. I reject the monoculture. I grow along its edges and feast on its mistakes. You can hate me, but if you try to kill me, then I will call out for another weed to come help me and we'll destroy your GMO corn crop. No, genetically tampered crops and their glyphosate herbicides are deadly to life, including humans. Back away from the product! Industrial agriculture is devastating to the climate, living ecosystems, and dinner.

We are drowning in a sea of identical details! Uniqueness is in the shout "Earthalujah!" The corporate state has taken over our food and art, our energy and transportation, our national security and our daydreams, and here comes a wind at a thousand miracles a second because the Earth is hot and bothered.

DHS: When I was hired to write a screenplay by Disney, I found out inside the company their nickname for it is Maushwitz. I noticed that you called Mickey Mouse the Antichrist. Why is that?

RB: Disney is the oldest international media company. The United States Congress openly extends Mickey Mouse's trademark. Disney believes in the monetization of desire down to three year olds. Now it's trying to make deals with hospitals to establish a protocol in birth centers, so that the mouse is the first thing the child sees. Disney runs a sweatshop empire, estimates range to 20,000 factories. That company is the burning lake of hellfire. I have a 5-year-old. I'm battling Christ and the anti-Christ daily. They deserve each other.

DHS: How did we get in the mess we are in today, with refugees roaming the Earth, drought striking down huge parts of our country, crazy violent weather, and insane homophobic, racist, raving lunatics running for president?

RB: I'm encouraged right now, surprisingly enough, because things are breaking open. Think of a few years ago, when the smooth monoculture of the Clintons ran things. The liberal capitalists didn't even know they were colonizers - they were so powerful for so long they thought that they were the natural world. So now people cross borders and the white demagogues scream. Well, that's good. Black Lives Matter at Trump rallies is our guiding moral force.

DHS: What can I, one humble human, do about all this?

RB: First of all, take your own mind seriously. Study your personal dreams and learn things in an on-purpose way. The full-court press of the American con-job is a hell of slippery Devil. It comes at you and won't let go.

Each of us is surrounded by thousands of products who insist that they are freedom, democracy and the American dream. In consumer society, the products say that they are actually you. Our identity passes into what we buy. The economy infantilizes us. So to take yourself seriously might feel lonely and harsh at first. But it's like a new kind of sex that you've been waiting for all your life. Get into it.

DHS: America has a great tradition of standing up to bullies, the little guy fighting against the rich and powerful, taking to the streets to try to get what we believe in. How did you start as a street activist?

RB: For years I preached in the Stonehenge of Logos - Times Square. The bully was Mickey Mouse, a 12-foot-tall statue standing behind me. And the bullies were also my fellow preachers up and down the sidewalks. The fundamentalism of right-wing apocalyptic Christianity is very much the same as Maushwitz, and so sometimes I felt surrounded and lonely. But as I started to get my rhythm going, my preaching "whoop", then people started clapping their hands around me. Then they began to harmonize like a doo-wop group. It dawned on me that I didn't have to be alone. The choir is being born. Activist communities have the best kind of love.

DHS: What do you want people to take away from your book?

RB: The book is a report on the work of the Church of Stop Shopping, our work in the Chase lobbies, at fracking sites on the Hudson River, in the police-station parking lot of Ferguson, Missouri, and in the laboratory in Harvard where they are trying to make a robot bee as Monsanto and Syngenta and Bayer kill the real ones. What do I want? I want a new kind of Earth activism. I'm like everyone else. I want to live and I want my kid to live.

DHS: What was the hardest thing about writing your book? What advice do you have for writers?

RB: We're still in a preliminary period in this apocalypse. At this time, the freak storms and extinction waves are still being sold back to the unconscious predators who make the climate in the first place. We're buying our own tragedy in flashy packaging and punny slogans and plastic credit.

We will stop shopping: stop letting them translate the Earth's screaming wind. We'll let the Earth disrupt us, admit that this tragedy is real - not as a theory or policy or electronic posting--but as life and death. Then we can tell each other that we will change because we must change. That is evolutionary dueting with the Earth, which is hair-raising, a shocker, and sometimes dead. But this is true of all the social movements that created freedom in our benighted America.

"Reverend Billy" is the nom de plume of William Talen, a performance artist who lapsed into his Earth ministry with a community of activists who sing as an act of trespassing against abusive corporations. They are "Reverend Billy and the Stop Shopping Choir" and are in recovery from various religions - having defended citizens from the fundamentalism of Consumerism. They originate their work in nonviolent dramatic actions against Devils such as coal companies, big banks, Walmart and Monsanto. The concert stage show, which they call "Fabulous Worship," has taken the company to four continents, most recently a rock tour with Neil Young on his "The Monsanto Years" tour, and a run at Joe's Pub at the Public Theater in New York.

David Henry Sterry is the author of 16 books, a performer, muckraker, educator, activist, and book doctor. His new book Chicken Self:-Portrait of a Man for Rent, 10 Year Anniversary Edition, has been translated into 10 languages. He's also written Hos, Hookers, Call Girls and Rent Boys: Professionals Writing on Life, Love, Money and Sex, which appeared on the front cover of the Sunday New York Times Book Review. He is a finalist for the Henry Miller Award. He co-authored The Essential Guide to Getting Your Book Published with his wife, and co-founded of The Book Doctors, who have toured the country from Cape Cod to Rural Alaska, Hollywood to Brooklyn, Wichita to Washington helping countless writers get published. He has appeared on, acted with, written for, been employed as, worked and/or presented at: Will Smith, a marriage counselor, Disney screenwriter, Stanford University, National Public Radio, Milton Berle, Huffington Post, a sodajerk, Michael Caine, the Taco Bell chihuahua, Penthouse, the London Times, Edinburgh Fringe Festival, a human guinea pig and Zippy the Chimp. He can be found at davidhenrysterry.com.