It just became far easier for press to get to the BP response site in Grand Isle. This was our last NewOrleans.com attempt. National Incident Commander Admiral Thad Allen has announced that media will now be able to freely travel within the 65 foot of BP's cleanup boom if they follow procedures for obtaining credentials.

"I have put out a direction that the press are to have clear, unfettered access to this event, with two exceptions -- if there is a safety or security concern," said Allen. "This boom is critical to the defense of the marshes and the beaches."

"We need to discriminate between media, which have a reason to be there and somebody who's hanging around when we know that we've had equipment vital to this region damaged," Allen said. This is a complete 180 from being required to stay 65 feet from boom at risk of a $40,000 fine or up to 4 years in jail.

Unified Command states that, "This step will further expand media access to frontlines of the BP oil spill response, and ensure that media representatives have the access they need to report this historic response-while maintaining the effectiveness of more than 560 miles of protective boom currently deployed to protect sensitive shorelines along the Gulf Coast."

A credential will be issued for media representatives to carry and display as needed. Captain Jim McPherson, USCG spokesman, said that: "We want the media and the public to see the tremendous unity of effort of 40,000 federal, state and local responders. We have provided hundreds of embarks on CG vessels and aircraft and we are offering overnight visits on a 210-foot Cutter forty miles offshore at the well site. We believe that by providing the media credentials for vessels, we will increase the ability of the media and the public to see the response effort."

The change in media access rules came the day after WDSU aired former BP employee Adam Dillon's statement. While employed by BP on Grand Isle, Dillon barred WDSU news reporter Scott Walker from access to the beach, and later turned whistleblower. Over 300,000 people have viewed that video on YouTube. 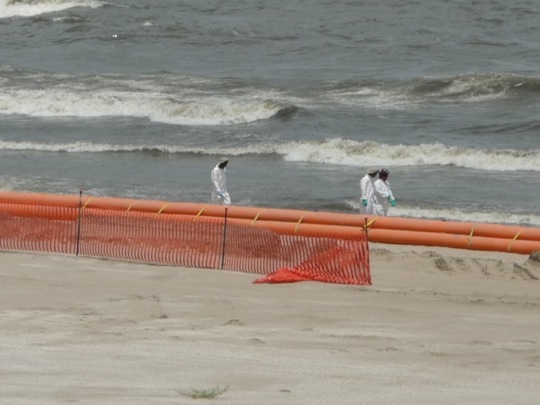