Front wheels out. Back in, head out. Wrong way parking.

Whatever you want to call it, Hawaii drivers seem to back into their parking spaces more often than their mainland counterparts. And while some people say it’s safer, it drives others crazy.

There's even a theory that this exercise in delayed gratification -- doing the hard part upon arrival and saving the easy part for the exit -- says something about the island's economic productivity.

It's clearly a talking-point issue -- all you have to do is search "why do people reverse-park?" in an online search engine and watch the comments queue up like, well, like a line of motorists waiting for someone to gingerly back into a tricky space. 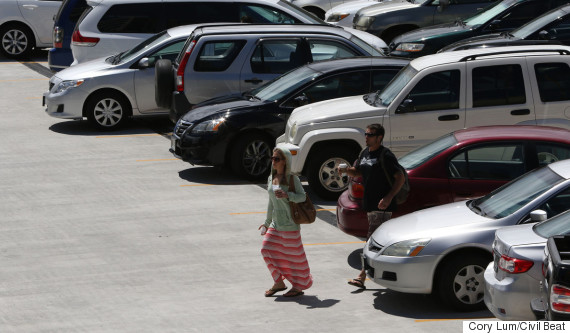 "If you pull in, it may be faster, but it is much harder to see the parking lot traffic as you are leaving," wrote one proponent of reverse-parking in a section of Yahoo.com.

“It's so when you come back out from shopping and find two SUVs the size of M-1 tanks on either side of you, totally blocking your view, you can exit the space with a modicum of safety,” wrote a commenter on ScubaBoard.com.

A commenter on another Internet forum spoke for the opposition: "When you back into a space it takes longer and you hold everybody up behind you. Are they planning on making a quick getaway? Have their registration tags expired?"

A critic on a different Yahoo Answers string put it like this: "It's just plain stupid unless it's a nose-to-nose row where you can pull through so you're resting with nose out."

And finally, the big picture from a commenter on ScubaBoard.com: "It's Hawaii, deal with it. (Hawaii drivers are) the most considerate, inconsiderate people I've ever met. They'll back up 20 cars to let someone in.”

There are dozens of conversation strings on Internet forums about reverse-parking, with surprisingly strong feelings on both sides. A few sites are dedicated solely to parking methods.

There’s even a satirical website about “Fancy Parking,” which suggests multiple parking methods such as the “Drive-Thru” to park their cars so their headlights are facing out. The "Drive-Thru" is pretty self-explanatory -- a driver pulls through one parking spot directly into the second one.

Whether or not people reverse into their parking spaces could actually tell us something about the economic productivity of nations, according to a recent article by National Public Radio. The study cited in the article was based on the idea of delayed gratification, which was also explored in the Marshmallow Test.

The Marshmallow Test found that children who waited for marshmallows instead of eating them right away ended up being more successful in their careers later in life.

So researchers applied the same idea to parking behavior. When you reverse-park, you get the hard part over with first. The study used reverse-parking as an indicator of willingness to delay gratification, and linked that to economic growth rates of countries. For instance, 88 percent of cars were reversed parked in China, compared to six percent in the U.S.

Researchers found that countries that practiced delayed gratification had better economic outcomes. It's the same kind of behavior -- setting up the payoff for later -- that can affect a country's economic success.

Reverse-parking is actually illegal in some states, so it's not surprising that people who move to Hawaii from the mainland are taken with how often they see it happening.

The habit might also be explained by a section in the Hawaii Driver Manual, which recommends that drivers reverse-park so they can enter traffic in a forward direction.

Most Hawaii parking stalls are narrower than those on the mainland, largely due to the high cost of land, said Joseph Farrell, who has designed several parking garages for Architects Hawaii Ltd.

"We do have an Asian population here in Hawaii ... and they come from a culture where they do back in," Farrell said. “When you get heavily populated, it seems like that’s when you start to do it. We’re going to see it more and more everywhere.”

He also notes that drivers have to make a 90-degree turn to pull into most stalls. In those cases, assuming you have front-wheel-drive, it’s actually easier to back in because the back wheels of the car are fixed in relation to the vehicle, which means that the back wheels don't follow the same path of travel as the front wheels. If you pull forward into a tight space, the back wheels cut the corner because they are stationary, so it may take a few adjustments to get into a tight parking spot.

If you reverse into the parking spot, the front wheels of the car can pivot around cars in the neighboring parking spots.

There may also be something to the idea of reverse-parking as insurance against big trucks parking on either side of you and blocking your view, because one of the most popular vehicles in Hawaii is the Toyota Tacoma, a large pickup.

According to the Insurance Institute for Highway Safety, almost 20 percent of car accidents happen in parking lots.

"When you back into a space, it's safe because you don't have as many people to contend with compared to when you back out," Farrell said.

The National Highway Traffic Safety Administration dedicates a whole section of its website to “backover” accidents, which cause an average of 183 fatalities and 7,000 injuries annually, with many of the victims being young children.

It could also be that Hawaii's parking behavior reflects a slower, more relaxed attitude in the islands that just makes it natural to not rush straight into a parking slot.

"People are more thoughtful here," Farrell said, and not in as much of a hurry.

"Slow down, enjoy life," a Hawaii resident wrote in one parking thread on an online forum.