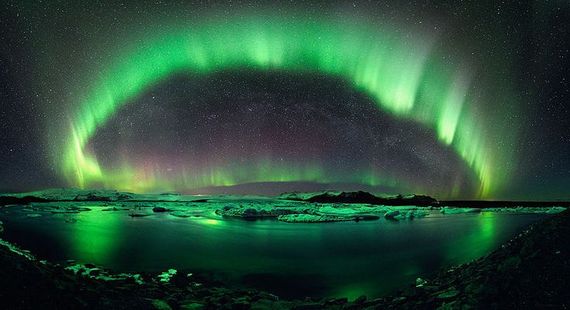 And God saw everything that He had made: and behold, it was very good.
-- Genesis 1:31

I brought you into a fertile land to eat its fruit and rich produce. But you came and defiled my land and you made my inheritance detestable.
-- Jeremiah 2:7

If you were to enter a church, mosque, or synagogue determined to plunder it before burning it down, you would probably end up in custody. Do the same to Earth, temple and home to us all, and you might be eligible for a government subsidy. Isn't that strange?

When psychologists talk about splitting, they refer to the habit of keeping sectors of life that belong together divided into different compartments. The unhealed child abuse survivor grows up to forget that the parent who beat them savagely was the parent they now idealize as an exemplar of loving discipline. The producer of violent films forbids his children to watch them. The speed dater with a track record of ending up with exploitative men convinces herself, again, that this man is the one she's been waiting for. The troll who attends church on Sunday spends the rest of the week vilifying people online.

Splitting, an emotional defense of early childhood, has become a character disorder of American society. News networks whose politician guests pushed the disastrous war in Iraq but never landed in prison invite them back as learned experts on the current tumult in Mesopotamia. Conservatives presumably familiar with the Gospels -- "Love thy neighbor as thyself;" "If a man asks for your coat, give him your cloak as well;" "Remove the beam from thine own eye" -- call for the exclusion of entire populations from the benefits of society.

Failure to remember the lessons of history is a form of splitting too, as when the public gives voter ID laws a nod while failing to recall Jim Crow and the post-Civil War tactics used to keep blacks from voting.

Every world religion has issued a public statement calling for the protection of the rapidly failing natural world. The split between the natural and the spiritual is of historically recent origin.

Here are just a few examples of respect and reverence for nature found in the sacred texts and teachings of all cultures:

And We have sent down blessed rain from the sky and made grow thereby gardens and grain from the harvest.
-- Qur'an 50:9

In the village, a sage should go about
Like a bee, which, not harming
Flower, colour or scent,
Flies off with the nectar.
-- Dhammapada

Even in one single leaf on a tree, or in one blade of grass, the awesome Deity presents itself.
-- Shinto saying

The Almighty has given us Earth to live and die on, but we have forgotten these blessings.
-- Guru Granth Sahib

All breathing, existing, living, sentient creatures should not be slain, nor treated with violence, nor abused, nor tormented, nor driven away.
-- Acharanga Sutra

Nature does not hurry, yet everything is accomplished.
-- Tao Te Ching

Nature in its essence is the embodiment of My Name, the Maker, the Creator.
-- Baha'u'lláh

Here are a handful of examples of what the Bible says about our relationship to the natural world:

For everything God created is good, and nothing is to be rejected if it is received with thanksgiving.
-- 1 Timothy 4:4

How many are your works, LORD! In wisdom you made them all; the earth is full of your creatures.
-- Psalm 104:24

And God said, Let the earth bring forth grass, the herb yielding seed, and the fruit tree yielding fruit after his kind, whose seed is in itself, upon the earth: and it was so.
-- Genesis 1:11

And God created great whales, and every living creature that moveth, which the waters brought forth abundantly, after their kind, and every winged fowl after his kind: and God saw that it was good.
-- Genesis 1:21

Are not five sparrows sold for two cents? Yet not one of them is forgotten before God.
-- Luke 12:6

...And the leaves of the tree were for the healing of the nations.
-- Revelations 2:22

How long will the land lie parched and the grass in every field be withered? Because those who live in it are wicked, the animals and birds have perished.
-- Jeremiah 12:4

It will be made a wasteland, parched and desolate before me; the whole land will be laid waste because there is no one who cares.
-- Jeremiah 12:11

The land is Mine and you are but aliens and My tenants. Throughout the country that you hold as a possession, you must provide for the redemption of the land.
-- Leviticus 25:23-24

Again and again we see in the spiritual traditions the demand to "put away childish things" (1 Corinthians 3:11) and act like responsible adults. By contrast, to plunder without thought, to take without giving back, to make messes without cleaning them up, to demand that others pay for one's own mistakes, to foster dependency instead of independence, to lie about the harmful impact of one's business practices, and to attack the poor while remaining on permanent public welfare: these are the acts of exploitive narcissists who never escaped childhood.

It doesn't take many to make a mess. According to a 2013 study by the Climate Accountability Institute, 90 companies generate two-thirds of the carbon pollution overheating Temple Earth. All but seven are in the oil, coal and gas industries. We could push the percentage up toward the top by including the giant meat conglomerates whose CAFO operations pen animals in poisonous stalls and the U.S. military, the largest unregulated polluter on the planet.

To reverse Genesis and turn back the cycle of life on Earth, these destructive industries receive generous funding, especially in the U.S., where fossil fuel companies reap $59 for every $1 they invest. During the 111th Congress they spent more than $348 million on campaign contributions. It's possible now to see which politicians these industries bought. Fossil fuel subsidies range from $14 billion to $52 billion a year.

That's a lot to pay someone for pinning down, penetrating, and sucking the vitality from what is left of our homeworld. Perhaps we need a new term: ecological vampirism. Examined through this lens, the holes left in the ground by industrial assault correspond to gigantic vampire bites into the flesh of Earth. 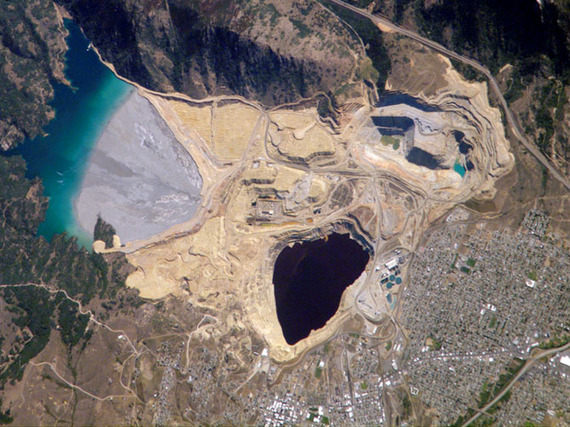 Much more goes on here than debates about how to power things. An energy source is not a neutral object: with it arrives layers of story and image to announce its psychological weight in the world. Myths and spiritual truths speak to these layers of meaning, as we saw above. To be more specific, where extractive energy industries dig and pump and spew they transfer the fiery Underworld from the realm of ancient lore to hard literality on Earth's surface. Where oil flows, so flows Phlegethon, the burning river of Greek mythology. Our word "plutocrat" derives from Pluto, the shadowy god of hidden wealth. The mythology and psychology of planet-plundering corporations are those of Hades, Hell and Death.

The operations of clean Earth-honoring energy introduce quite other images: sun and wind, wave and sky. These are the images of flourishing life and limitless abundance. With current solar technology, 128,000 of desert acreage absorbs enough sunlight to power California. In a few years the amount of acreage needed will undoubtedly shrink because of steady technical advancement. The combined fossil fuel resources of this planet, all of them, equal about 20 days of sunshine.

The next few years will see the collective decision made that stands before us now: Will we permit the forces of extractive darkness to make a Hell on Earth, or will we clean up our ecological temple and home and move forward together as responsible adults who have come of age, having learned how to care for ourselves, each other, and a world still filled with other living beings? Will we heed our own religious traditions and guides or die off, not through natural extinction but through a lethal failure of moral and spiritual courage?

This day I call the heavens and the earth as witnesses against you that I have set before you life and death, blessings and curses. Now choose life, so that you and your children may live.
-- Deuteronomy 30:19