Serendipity has a way of intervening in our lives. A few weeks ago, I attended a dinner with Meals on Wheels Board Members from a program in Waxahachie, Texas. Sitting to my left was a charming woman whose aunt, as it turns out, was the architect behind what is today celebrated each May -- Older Americans Month.

My fellow dinner companions and I were captivated as we were treated to a little known story about how Anna C. Leahy championed older Americans in the early '60s. Through her efforts, President John F. Kennedy proclaimed in May of 1963, Senior Citizens Month. 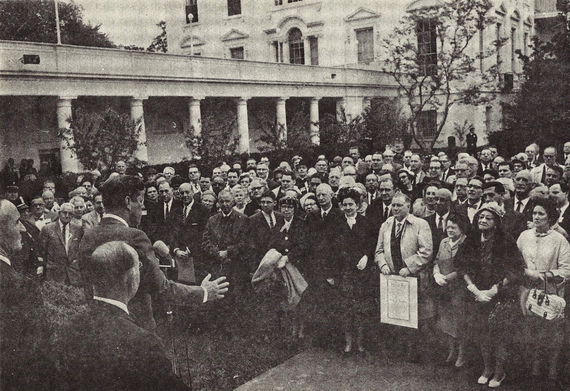 Besides the riveting story, what really struck me is that today, more than ever, older Americans need champions. But it's hard to generate a groundswell of support (or pomp and circumstance) because we have become a nation in which aging is neither sexy, nor honored. Which, if you think about it, is pretty frightening, given the fact that soon the number of seniors will outnumber the young.

My parents instilled in me -- and their parents in them -- to respect and even revere our elders. Getting older was a badge of honor. Today, growing old in America can mean being hungry and isolated, and often forgotten. And for nearly 9 million seniors, it does. But it doesn't have to be that way.

Those who are lucky enough to get a daily home-delivered meal, friendly visit and safety check from a local Meals on Wheels volunteer, are living far more nourished lives -- more independent, happy and healthy and in their own homes. In contrast, those who aren't properly nourished are more likely to end up prematurely in the hospital or a nursing home with chronic disease and/or disability.

It doesn't take much to celebrate seniors, and it takes even less to invest in their health and well-being. For just $7 a day on average, or less than $2,000 a year, we can champion an elder in need. That's equivalent to one day in the hospital or six days in a nursing home, often paid for by taxpayers. It turns out that for every $1 invested in Meals on Wheels, we can save up to $50 in Medicaid. That's certainly a cause for celebration.

As May comes to a close, let's focus on paying it forward, just like Anna C. Leahy did, and enlist a new generation of champions for seniors in communities across the country.