The following article first appeared in The National Book Review: 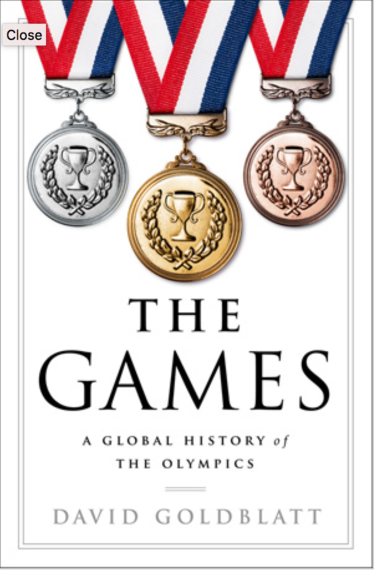 The Games: A Global History of the Olympics by David Goldblatt (W.W. Norton)

David Goldblatt's The Games: A Global History of the Olympics focuses more on scandal and controversy in the modern Games than on iconic moments and transcendent athletic performances. The International Olympic Committee will not be plugging this book.

Goldblatt first takes us back to Athens in 1896, where French aristocrat Pierre de Coubertin led a revival of the ancient Olympic Games, and then moves chronologically through each subsequent Games, all the way up to Rio, with special attention to bribery and bid rigging, doping and other means of athletic cheating, biased judging, racial discrimination, and the dubious benefits of hosting the Games.

Along the way, he provides a tour of world history through the lens of the Olympic Games - the racial supremacy of Hitler's Olympics (Berlin 1936), the Cold War-era Olympic boycotts (Moscow 1980 and Los Angeles 1984), and the emergence of China as a formidable player on the 21st Century international stage (Beijing 2008). The purity of sport repeatedly yields to the reality of politics as the Games take on great symbolic value as a demonstration of a nation's power and prestige. Countries get caught up in "winning the Olympics" by tallying the highest medal count. Cheating becomes endemic and even state-sponsored.

* The first modern Games (Athens 1896) were all-white and all-male. Track races are normally run counterclockwise, but the races at these Games were run clockwise. And while the American hurdlers could clear the hurdles without breaking step, the Greek runners "had to jump, stop and start again."
* In the marathon race of the first Games held in the United States (St. Louis 1904), an American named Fred Lorz entered the stadium in first place, and "pandemonium reigned for a few moments, until it became clear that he had made at least part of the way there on the back of a truck and was disqualified." Another runner in that race had to run an extra mile "to get away from an aggressive dog."
* Sports that were included in early Olympics Games but later discontinued include tug-of-war, croquet, and live pigeon shooting.
* The modern pentathlon (fencing, swimming, show jumping, pistol shooting, and a running race), a version of the five-event contest from the ancient Olympic Games, is intended to simulate the "romantic, rough adventures of a liaison officer whose horse is brought down in enemy territory" - he must ride a horse, defend himself with his pistol and sword, swim across a raging river, and deliver a message on foot.

Gender, ethnic, and racial discrimination plagued the Olympics right from the start. Coubertin thought women athletes were "the most unaesthetic sight human eyes could contemplate," and although the Olympics admitted female competitors in a few sports such as tennis beginning in 1900, they were prohibited from competing in most events.

Women were first permitted to compete in track and field in Amsterdam 1928 (in five events, including the 800-meter run), but the sight of women exhausted at the end of a race was too disturbing, according to accounts at the time. "It was a pitiful spectacle: to see these girls tumble down after the finish line like dead sparrows," read one contemporaneous account. "This distance is far too strenuous for women." Following this event, women were not allowed to compete in races longer than 200 meters at any Olympic Games until 1960.

Goldblatt traces the legacy of racial discrimination at the Olympics, from the racial inferiority myths to the inexcusable snubs and attacks. The first African-American to win an Olympic gold medal was William DeHart Hubbard, in the long jump at the Paris Games of 1924, and only the black press in the United States reported the story. When American Jesse Owens won four golds in track and field in Berlin in 1936, no newspaper south of the Mason-Dixon line published his picture. And when Tommie Smith and John Carlos famously protested racial injustice by each raising a black-gloved fist at their medal ceremony in Mexico City in 1968, the IOC president expelled them from the Games.

Goldblatt's account of the history of performance-enhancing drugs at the Olympics is particularly striking, coming amid new revelations of Russia's state-sponsored doping program of recent years. Use of drugs to augment athletic performance at the Olympics dates back to the early 20th Century, first with strychnine, alcohol, caffeine, and amphetamines, and later with testosterone and anabolic steroids. With no effective drug testing program to stop them, the East Germans in the 1970s and 1980s developed a widespread doping program that greatly boosted their medal count, particularly for female athletes.

Only a small percentage of athletes suspected of using performance-enhancing drugs have been punished for their actions. At the Moscow Games in 1980, Goldblatt notes, not a single athlete failed a drug test, but a West German doctor on the IOC medical commission later tested the same urine samples and concluded that 20 percent of them, including 16 gold medalists, should have failed.

Goldblatt also covers in great detail how the Olympic Games have affected host cities, mostly in negative ways. The cost has risen into the billions of dollars, driven largely by the desire to create an electrifying spectacle for a massive and growing global television audience. In too many cases - most notably Montreal 1976 and Athens 2004 - the Games have ended up as a financial disaster.

Equally damning, hosts invariably promise to revitalize their cities, but rarely do the Games have a lasting positive effect. More common is a last-minute rush to complete necessary construction, the elimination of more significant projects, and a lot of window dressing (ushering drug addicts, street prostitutes, and the homeless out of sight for the duration of the Games, and using colored paint to conceal shanty towns).

I had hoped that a history the Olympics would offer up more on the greatest athletes and competitions through the years, but Goldblatt offers only a passing nod to Olga and Nadia, Spitz and Phelps, Carl Lewis. If you're looking for the stirring stories of Greg Louganis winning gold after hitting his head on the diving board (Seoul 1988) or Kerri Strug landing her vault dismount on a badly injured ankle to secure gold for her U.S. team (Atlanta 1996), this is not your book.

In those rare instances that the author does shine a light on a particular superstar, it's usually to highlight a controversy, such as the IOC's decision to strip decathlon champion Jim Thorpe of his medals after it was determined that he had violated the Olympics' rules on amateurism.

On the matter of amateurism, the notion that professional athletes were barred from competing in the Olympics seems quaint today, but for most of their history, the Games were reserved for amateurs, and it wasn't until the 1980s that the Olympic Charter dropped the distinction between amateurs and professionals. The arrival of the U.S. men's basketball Dream Team in Barcelona in 1992, featuring Michael Jordan, Magic Johnson, and Larry Bird, marked the definitive end of the concept of amateurism at the Olympics.

"This was the America of triumphant capitalism," Goldblatt writes, "whose hyper-commercial sports machine, long excluded from the Games, would now demonstrate its effortless superiority above all to the vanquished forces of socialism in the form of state-supported basketball."

On a lighter note, Goldblatt quotes Dream Team member Charles Barkley before the team's first game: "I don't know much about Angola, but I know they're in trouble."

Goldblatt does offer a few tales of heroism and good sportsmanship. Three stories in particular stayed with me. First, in the Seoul Olympics, a Canadian sailor named Lawrence Lemieux gave up his chance for a gold medal to rescue a Singaporean crew whose boat had capsized. Second, in a now-iconic Olympic moment from the Barcelona Games, the British sprinter Derek Redmond tore his hamstring during a 400-meter semifinal race, and his father ran down to the track and helped his son across the finish line as the crowd gave them a standing ovation.

And finally, in the Tokyo Games of 1964, the entire nation of Japan was stunned and saddened when its judo champion in the open-weight division, Akio Kaminaga, lost to a gigantic Dutchman named Anton Geesink. "First there was silence, then there was sobbing as the crowd absorbed the fact that Japanese manhood, in competition with the West, but on its own chosen territory, had been found wanting. Then, as a few Dutch fans sought to rush the stage and congratulate the champion, Geesink raised his hand to stop them and made his formal bow to Kaminaga. The audience rose, applauded and never forgot this act of grace."

The International Olympic Committee may fall short of the Hellenic virtues of glory, honor, and valor, but the Olympians themselves rise to the occasion. Perhaps that's why - along with what Goldblatt allows are "spellbinding moments of individual human brilliance and collective cosmopolitan awe" - our attraction to the greatest athletic spectacle in the world remains impervious to tales of scandal and corruption.

A Journal of Books and Ideas