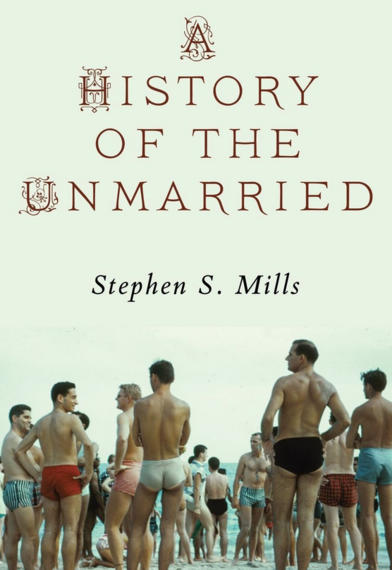 Given that gay marriage has dominated the American political landscape for far too long, it should come as no surprise that somebody has written a book of poems about it all. But A History Of The Unmarried by Stephen S. Mills is not just another book of poetry that takes on marriage equality as its theme. It is that, but a whole lot more. Mills' work is a terrifically rich, timely, and a seductively personal and honest look at what it means to be two men in a loving partnership.

Frank O'Hara, an obvious mentor and muse to Mills, is alive in this work, which is both conversational and confessional - a diary, of sorts, but a good one. The poems bring us universalism in a highly personal voice. This work speaks because it is authentic. In fact, we are given too much of the truth at times. Mills queers queer poetry, and he made this reader blush more than once - a certain feat on both counts.

A History of the Unmarried is a book about marriage, gay marriage, and marriage politics, as experienced by the poet and his partner over the course of many years.

But this collection is really a love letter, a love letter between two men that is so commanding and genuine that even the most conservative reader will end up questioning what constitutes a sincere and loving partnership - a marriage. It is not a simple kind of love that is portrayed between these covers, it's messy and often crude, but it's powerful and particular. Mills has a way with words, with truth, facts, that prevent the reader from doubting that love actually can exist between two men in a bed with three bodies - a notion perhaps not familiar to many of us.

The man next to me isn't you.
He's taller. Hair shorter. Skin
darker. You're on the other side.
The sheets on the floor. The dog
scratching the door. Everyone
naked. Everyone still. The sudden
peace that comes from release.
We don't know his name.
It doesn't matter. He is a body.
You are a body. I am a body...
(Excerpt from, "Obama Says Same-Sex Couples Should Be Allowed To Marry, May 2012")

A History of the Unmarried is plainspoken and accessible, yet refined and visually replete. Mills appreciates the interrogative form and constructs his questions with terrific skill, executing them with impeccable timing again and again. Every poem in this collection leaves the reader's mind twisting and turning long after the printed page. Simply put, Mills' poems are an inescapably thought-provoking and wonderfully engaging look into what it means to queer the most heteronormative institution of all time.

...She wants to know if we were "normal,"
who would carry the children? Who
would pack the lunches? Sew the Halloween
costumes? Punish the little brats
with a wooden paddle? She wants to know
whose body part goes where. How to
connect our dots...
(Excerpt from, "A Stranger Asks: Who's The Man And Who's The Woman?")

Stephen S. Mills takes the Mad Men-era notion of marriage that many of us grew up on and feeds it to the proverbial family dog. Love doesn't come with a set of rules, Betty Draper. Nor is it synonymous with monogamy, thank you very much, President Obama. A History of the Unmarried will have you second-guessing everything you thought you knew about love, marriage, relationships, sex, and boys who dedicate books to their mothers.

Michael Ernest Sweet is a Canadian writer and photographer. He lives in New York City.