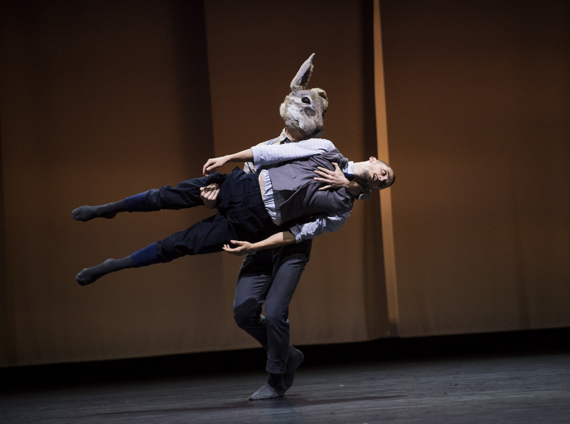 Still, the troupe's collective power and virility sometimes proves to be as much of a liability as an asset. As their latest production Life shows, there is a fine line between finding artistic inspiration in these qualities -- and really, who wouldn't? -- and using them as a substitute.

This was one of the unintended contrasts that found its way into an evening that was all about dichotomies. Featuring new works by Swedish choreographer and film-maker Pontus Lidberg and veteran Venezuelan dance-maker Javier de Frutos, Life is a tribute to the tensions between life and death, the real and the imagined, the heartbreaking and the absurd.

Lidberg's "Rabbit" opens the program in a surreal dreamscape. A solitary swing hangs against a twilight-hued backdrop. Two men perform a melancholy duet to the mournful strains of Henryk Górecki's Little Requiem for a Classic Polka. One of them wears a lifelike rabbit mask.

More dancers join -- some men, some rabbits, some a little of both. The way they tumble on and off stage beneath the panel-draped wings makes it seem as if they are slipping under a closed door, appearing and vanishing in a space heavy with subconscious symbolism. The world Lidberg has created is a private, inner one.

But our inner worlds have their lighter moments, and so does Lidberg's creation. Between introspective solos and aching duets, riled-up rabbits chug, skip and jig. Reflecting the progression of the music, "Rabbit" is by turns contemplative, manic and just plain funny.

Lidberg's choreography favors high-contact partnering and low, grounded movements that expand into melting, sinuous lines. It is physically demanding, but never showy, and structurally and musically sophisticated. The style works beautifully on the BalletBoyz: refreshingly, it puts their physical prowess to the service of their considerable artistic gifts. Restraint is a good look for them.

But it doesn't last long. In the second half, "Fiction" constructs a living wake around de Frutos' own, imagined death. Fittingly for the flamboyant choreographer, restraint is out the window.

The work is set in the BalletBoyz studio as they warm up to rehearse. News of the choreographer's death -- by a falling shard of plastic, we're told -- sends them into a tailspin of grief. As a recorded obituary recounts the highs, lows and many controversies of de Frutos' career -- including one work described by a critic as the "greatest piece of crap ever made" -- the dancers struggle to move on, each grieving in his own way.

Anchoring the piece is a steel ballet barre that the young men slide under, jump over and cling to for dear life for most of the piece. As a pillar of stability and the foundation of ballet class, the barre is an effective symbol, and at times, it enables some interesting choreography.

But the barre becomes a crutch, the beefcake acrobatics get stale, and the tongue-in-cheek humor of the obituary quickly gives way to self-indulgence. When a lone dancer shakes off his grief disco-style to Donna Summers' "Last Dance" in the final frame, the audience-rousing effect feels eye-rollingly manufactured.

Still, the bold contrast between the two choreographers in Life speaks to the artistic ambitions of Nunn and Trevitt, as well as the creative hunger of their dancers. As the company continues to mature beyond its origins as a talent showcase, hopefully they'll learn to trust that less is often more.