6 Star and Beyond-the Essence of Fuller, the Future of Humanity

I did not truly begin to understand the breadth and depth of Buckminster Fuller's thinking until I read this book as it deserves to be read, with full attention and detailed notes. This is one of those books that merits-and received from me, a Work Table of core concepts, definitions, obstacles, and solutions, posted line at Work Table.

Although I heard Fuller speak personally at Muhlenberg College and distinctly remember him saying that a housing foundation could support the Queen Elizabeth ocean liner, it was not until this book that I understood in detail exactly what he meant: that we are wasting 90% of what we put into buildings. I have previously read and reviewed Critical Path as well as Operating Manual for Spaceship Earth, and it is my great privilege to know Medard Gabel, co-creator of the analog World Brain and sole creator of the new digital EarthGame (in concept pending funding). 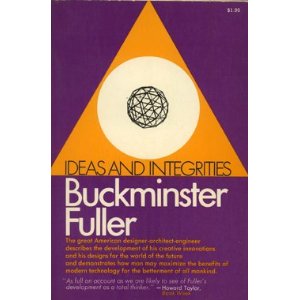 CORE POINT: True wealth is cosmic energy and the creation of means to deliver to humanity unlimited free energy. Among many other things this creates the possibility of applying energy to crreate self-contained homes that are lightweight, fully self-contained in water and sewage, and totally green.

CORE CONCEPT: Capitalism and democracy have been perverted by money-those who manage money manage those who manage politics, and they both concentrate on optimizing the false good of money, an abstract concept hardly worth its paper representation, while ignoring-even subverting-the possibility of achieving infinite cosmic wealth on behalf of all of humanity.

CORE CONCEPT: Predatory capitalism on the one hand, and controlled socialism on the other, are both extremes and both fail to meet the needs as well as the possibilities of humanity. Fullerism is at root a non-zero equation.

PERSONAL POINT: This book answers the question I could not answer when a senior executive asked me "what do you do?" Now I know. I am a Comprehensive Global Architect whose objective is Prime Design: From Waste to Wealth (the title of my next book, inspired by this core reading from Buckminster Fuller). All my prior works, including my most recent, INTELLIGENCE for EARTH: Clarity, Diversity, Integrity, & Sustainaabilty, have been a preamble to what I now recognize is my life's work...I will try to earn another 25 years (I am 58, 58 + 25 is 83 -- my family history suggests I will make it). I am still looking for a country or global organization that wants to profit from doing this. Medard and the rest of the co-founders of the Earth Intelligence Network, a 501c3, seek funding for three years, thereafter the Big Bat should take care of all operating costs.

A few definitions up front:

Advertising destroyed public trust by pre-empting "industrial design" as code for airbrushing superficial changes to move products to market, rather than seeking integral improvements that could be shared with the consumer.

Synergy is the delta between the sum of the parts and their anticipatable outcomes, and the actual outcome not anticipated.

Architects deal with the externalities of man.

"At rest" science and understanding (Newton's paradigm) have been replaced by "constant change" (Einstein's paradigm).

Bad housing breeds bad humanity and bad science-the time/energy costs and the materials costs are too high, housing is the socio-economic "runt" of all the professions.

Design-preventable includes illumination and prevention of corrupt exploitation of materials for inefficient or unjustifiable applications.

Good design would reduce the per capita consumption of building materials from nine tons per person to one ton per person [this is in the developed world--these reductions would allow the extension of the lower tonnage home designs to nine times more people and more -- with mass consumption come mass efficiencies.]

Industry is *supposed to be* the organization and application of collective knowledge and action that produces synergy (added value) over the sum of the parts in isolation.

Individual freedom is ESSENTIAL to the expansion of diversity needed to enable collectives to see the whole.

Total Thinking is the intelligent acquisition, ingestion, processing, and exploitation of all relevant information in order to produce efficiencies and effects beneficial to the mission objective.

Worldwide commonwealth credit is both needed and achievable to provide mass-produced sustainable housing for all. That in turn frees up the five billion poor to create "infinite wealth" by combining their intellect with infinite free energy to advance civilization.

OBSTACLES to advancing humanity include:

"Credit" fueled the perpetuation and expansion of rotten housing at great cost.

Housing as the sucking chest wound in economics [mortgages should not be tax-deductible, this both encourages waste of materials on housing, but also enables the growth of financial fraud]

Managers lack the over-all philosophical discernment to be effective at seeing the whole and building to the whole.

Specializations are attracting the most gifted, and this leaves the less gifted dealing with integration if they think about it at all. [I always thought this was what business and public administration programs were supposed to do, but having graduated from such a program realize they do not.]

A HANDFUL OF QUOTES

p. 25 "My envisioned transcendental world design plan would be inherently nonpolitical, because it would be utterly independent of any need for authority beyond that to-self-by-self for initiation of its study and development."

p. 95 In relation to the waste of heavy materials in housing, "...that in this war crisis it is technically treason to allow ourselves to be short sixty-five thousand freight cars weighing fifty tons of steel each, which shortage is equivalent to the number of cars required exclusively to transport the solid foundation and flooring materials unscientifically employed as frozen compression elements to structurally support the tiny weights of one-tenth-of-a-ton load of men who comprise the negligible working loads of housing, or to support machinery from below that could better be suspended, etc."

p. 246 "The efficiency of the industrial equation is directly proportional to the numbers consuming." [In other words, capitalism focused on the needs of the one billion rich is long overdue for a redirection of focus to the needs of the five billion poor.]

p.247 "Serve one hundred per cent will involve a world design revolution, not just design of end-products, but of the comprehensive industrial network equations including world-around-livingry-service systems, at regenerative occupancy rentals, mutually installed in anticipatory facilitation of total world enjoyment of individually respected total man."

p. 249 "Only the free-wheeling artist-explorer, non-academic, scientist-philosopher, mechanic, economist-poet, who has never waited for patron-starting and accrediting of his coordinate capabilities holds the prime initiative today."

Energy investments will define the future.

Need a world housing industry. We do NOT need water, sewer, and electrical infrastructure. Distributed housing and small cities connected by high-speed rail should be the norm.

Harvesting of scrap is the next needed Manhattan Project/Marshall Plan.

A HANDFUL OF RELATED BOOKS

Radical Man: The Process of Psycho-Social Development
The exemplar: The exemplary performer in the age of productivity
Communitas: Means of Livelihood and Ways of Life
Human Scale
Nonzero: The Logic of Human Destiny
The Knowledge Executive: Leadership in an Information Society
Reflections on Evolutionary Activism: Essays, poems and prayers from an emerging field of sacred social change

The author is the #1 Amazon Reviewer for Non-Fiction (32/215 over all review groups). He reads in 98 non-fiction categories. All of his reviews are accessible by category, something Amazon declines to make possible, at Phi Beta Iota the Public Intelligence Blog, with all reviews leading back to their respective Amazon Page.

Review: Designing A World That Works For All