This is not about Dave Eggers, the best-selling author and founder/editor of McSweeney's. Nor is it about David Byrne, the bike-rack designer and lead singer of the Talking Heads. This is about visual art and the two-man show that currently features work by both Eggers and Byrne at San Francisco's Electric Works (on show through August 21). 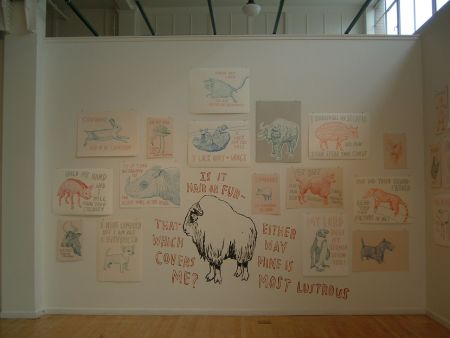 The first, and last, impression of this show is delight, with a dose of idiosyncrasy. It's a good summer offering: light and witty, even quirky hip. Eggers's contributions take up the larger space of the gallery, while Byrne's work is featured in the smaller side-room. The work shares a clean aesthetic; both present drawings on paper (Eggers uses China marker, Byrnes, graphite) that incorporate use of text. Eggers' space also features the same words and images painted large on the walls. Color is limited -- black, white, orangey-red, and grey-blue. 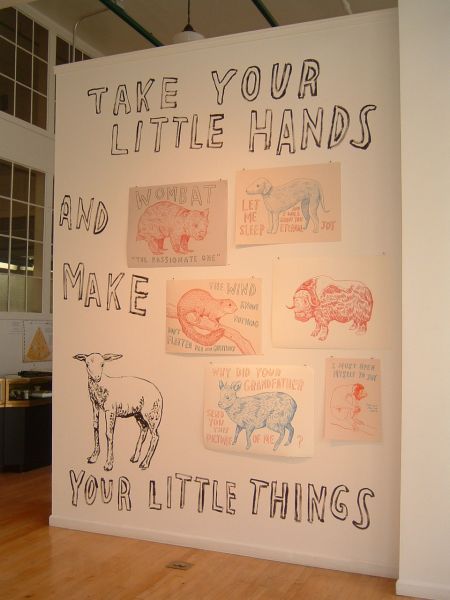 This is Eggers first solo art exhibition, and it's a nice start. But this is not the first time Eggers has made visual art (though this his most recent work; all pieces are 2010). He studied painting and art history at the University of Illinois and worked as an illustrator, cartoonist, and designer before switching over to the written word; he didn't think he could make art a career.
Each piece in the show features a detailed drawing of an animal against a blank white or tan of the paper surrounded by text; the animal images are based on old photos, and the text is Eggers' idea of what that animal might be thinking. Appropriately, the animals' personalities are introverted, standoffish, or a little sad. The artist's graphic/illustrative influences are clear; the uncluttered, bold layout with large lettering is reminiscent of political propaganda posters -- nature illustrations meet Shepard Fairey. 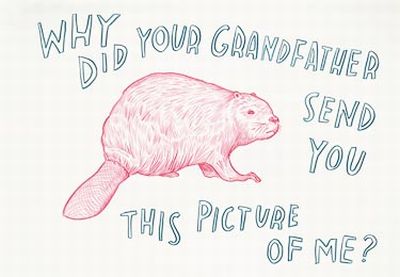 Why Did Your Grandfather Send You This Picture Of Me? by Dave Eggers
Photo courtesy SF Electric Works

The works on paper are hung all over, a loose salon style, and broken up by the large wall works. Animals are everywhere. A beaver poses the question: "Why did your grandfather send you this picture of me?" A rhino states: "It is time you thanked us for deeds done in thy name." A bull notes: "You will never have a successful long-distance relationship." And a bat boldly says: "Go to the city in your car." In several cases, the same text is used with a different animal or the same animal is paired with different text. The phrases are humorous, at times poignant or advisory, though several do feel like inside jokes or personal observations we're not let in on. 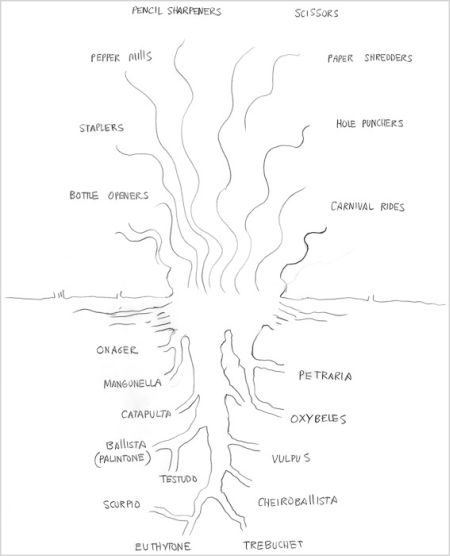 This is not David Byrne's first art exhibition; he has been showing artwork since 1990 (in a group show held in Tokyo). Featured here are several drawings from his early 2000s "Arboretum" series (which was, incidentally, featured in a book by the same name published by McSweeney's). As the series' title suggests, the images (mostly) connote trees; they are very simple line drawings that only hint at the form. Fittingly, image serves only as structure for what are really diagrams (also on view are a bar graph and a Venn diagram); a word is written on each branch and root. In them, Byrne humorously, smartly traces the connection or flow from one idea to another, often seemingly unrelated, idea -- unless you're Byrne's imagination. In his words, Byrne says:

Drawing/diagrams (mostly) in the form of trees, which both elucidate and obfuscate the roots of contemporary phenomena and terminology. Sort of like borrowing the evolutionary tree format and applying it to other, often incompatible, things. In doing so a kind of humorous disjointed scientism of the mind heaves into view. 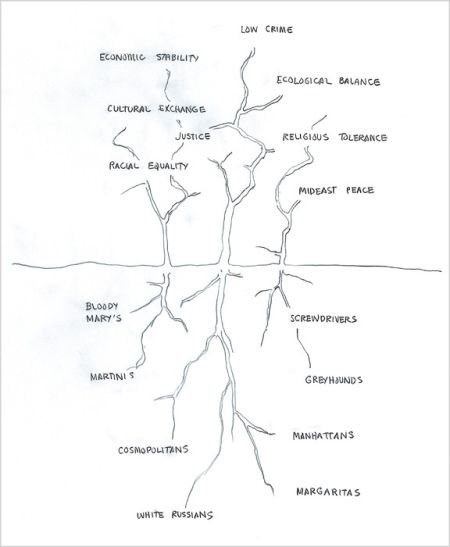 In The Performing Arts, roots of One-Man Show, Dance Theater, Revival, Fringe and other performance-associated designations grow branches of Bankers, Designers, Bureaucrats, Politicians, Career Military, and other professions. The Influence of Mixed Drinks features roots of various popular cocktails and branches of idyllic world situations: Racial Equality, Religious Tolerance, Mideast Peace, and the like.
The shows together provide insight into the creative thought processes of these contemporary cultural influencers.