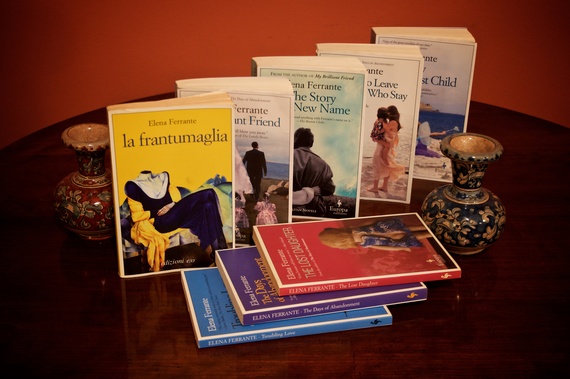 The following review first appeared in The National Book Review

The recent publication of Frantumaglia: A Writer's Journey, a collection of letters by, and interviews with the pseudonymous writer Elena Ferrante, brought me back to a moment inside a Milanese bookstore a decade ago. I can still recall my pure delight in spotting the only copy of the original Italian edition and grabbing it with the greedy fingers of a child upon the last piece of party cake. Even though the slender canary-colored paperback was beyond my Italian language abilities, nothing could interrupt the sweetness I imagined awaiting me.

This excitement was the product of having stayed up all night on the plane ride to Milan reading The Days of Abandonment, the first Ferrante novel to be published in America. The book minutely details the unraveling of a woman whose husband leaves her, and their two children, for someone younger. The protagonist's fury, hearkening back to those famous women of ancient tragedy, unnerved me, but the book offered more than a piercing examination of the psychic wounds of marital betrayal. The birthplace of Ferrante's protagonist was southern Italy, the homeland of my maternal and paternal grandparents, and the novel suggested that the legacy of poverty and illiteracy doesn't quietly disappear; rather remnants pass through the veins of its descendants like Vesuvius's lava, seemingly dormant but smoldering in times of anguish.

I was hooked with just one book; I felt that Ferrante's Italian story offered clues to interpreting my Italian-American story and I wanted to shout her (pseudo) name from the rooftops. Frantumaglia, a dialect word that Ferrante's mother used meaning a jumble of fragments, promised more - a window, or even a single pane, into someone who kept her identity a mystery, asserting that a good book speaks for itself. Where was the "sheer egoism," the trait that George Orwell listed first among authorial motives in his essay "Why I Write"?

I awaited Ann Goldstein's translations of Ferrante's Troubling Love and The Lost Daughter (I gave up the hard work of translating La Frantumaglia about twenty-five pages in). I told my friends about Ferrante, but considered my passion a private one, hungering for her southern Italian protagonists - all educated and cultured women, yet battling class barriers and character traits mapped by geography and genetics.

After producing three novels, all slender gems, over two decades, Ferrante feverishly penned the brilliant four volume Neapolitan series, published in America between 2012 and 2015. New Yorker critic James Wood praised her fiction and shortly after "Ferrante Fever" set in, resulting in 2.6 million English copies of the tetralogy now in print. This sweeping 1600-page narrative of girlhood friends growing up in postwar Naples even gave Hillary Clinton momentary respite from the campaign trail. When recently asked about the last book she had read, Clinton cited the first volume, My Brilliant Friend, describing it as "hypnotic," and adding that she had already begun the second novel.

Ferrante's publishers decided to re-release La Frantumaglia in English, renaming it Frantumaglia: A Writer's Journey and doubling its size with an additional thirteen years of reflections and interviews. It should have been a celebratory moment, but the book has arrived at an awkward time. Ferrante's legions of fans are outraged and depressed after Italian journalist Claudio Gatti claims to have revealed the author's true identity, offering compelling evidence that she is Anita Raja, a translator based in Rome and former director of the European library of the Goethe Institute. Gatti, who works for the financial newspaper Il Sole 24 Ore, traced a large spike in payments to Raja from Ferrante's publisher after the Neapolitan Quartet became an international success, as well as real estate purchases by Raja and her husband, Neapolitan novelist Domenico Starnone, around the same time.

The international outrage over this large-scale invasion of privacy was nearly universal, and Ferrante's long-held assertion that her anonymity supplies the creative space essential to her work has left readers wondering why Gatti would act so boorishly, a kind of literary Donald Trump in an assault against a gifted woman writer. Under these circumstances the publication of Frantumaglia suggests a temporary balm while readers await what's next.

Frantumaglia, however, is an imperfect book for an American audience introduced to the writer through the Neapolitan Quartet. The first several hundred pages discuss the three early novels, works with which a majority of American readers are unfamiliar, and the worthwhile passages require some wading through to reach. Even the most devoted Ferrante reader loses interest in the pages of suggestions to director Mario Martone about his screenplay of her novel Troubling Love, a film that was never released in America.

And better to skip the testy exchange with a journalist, the first of many, as Ferrante chides a reporter about requesting an interview with her a year after Troubling Love was published. She asserts that his belated interest is only because her book is being made into a film and lectures him about how the media treats literature as film's stepchild. Ferrante initially decides not to send her reply, but then publishes it in La Frantumaglia. The savaged journalist reads the missive and sends a follow-up note included in this new edition explaining that he didn't have a job as a cultural reporter when he first read the novel and therefore had no venue in which to write about her work. Never mind.

With perseverance, however, delightful and engaging nuggets emerge. Ferrante describes the fiercely self-scrutinizing protagonists of her early novels as women who practice "a conscious surveillance on themselves." Her observations about this surveillance -- their "watchfulness, vigilance" -- evoke the ruminative, essayistic quality of her prose that lures readers into falsely believing the work is autobiographical. She includes passages from earlier versions of her manuscripts, offering a glimpse into her writing and editing process; and she offers comfort to struggling writers everywhere, admitting she discarded several manuscripts she deemed unpublishable in the ten years it took to produce her second novel.

One of the most enjoyable sections occurs about two-thirds of the way through, a freewheeling discussion with Ferrante's publishers about her body of work and how frantumaglia, the jumbled fragments of memory, eventually find their fictional form. The nuanced final exchange with Italian novelist Nicola Lagioia about the interdependence of the characters in the Neapolitan Quartet - creating neighborhood ties that Lagioia sees as an antidote to solitude and Ferrante ultimately rejects as "confining and harmful" - offers a fascinating commentary on contemporary Naples.

The most problematic aspect of Frantumaglia beyond its repetitive format is its autobiographical untruthfulness - if we accept Gatti's claim. Several times Ferrante recalls a remark by Italo Calvino, "Ask me what you want to know, but I won't tell you the truth, of that you can be sure." This warning seems a justification for answering journalists' questions about her background with fictional answers. Ferrante includes lengthy descriptions of her mother's work as a seamstress in Naples; Raja's mother was a teacher, born in Germany to a Polish Jewish family. Ferrante describes Naples as the city that defined her childhood, adolescence, and early adulthood - the city that she, like her protagonists, eventually chose to flee; from the age of three Raja lived in Rome. Ferrante writes about a sister (Raja has no sisters) with whom she gets lost in Naples in the rain, a story that will find its form years later in her novel My Brilliant Friend.

One can argue that fictional truths are grounded in falsehoods, that literary truth is, in Ferrante's words, "released exclusively by words used well." But in an age when facts are viewed as optional, when tragedies of history are denied, to purposefully lie in a nonfiction format is jarring. Why not simply remain in the silence of a chosen anonymity?

Throughout Frantumaglia, Ferrante's understandable frustration with journalists' obsession about her identity grows, turning at times into hostility. Gatti's crude actions are inexcusable, but sadly, one feels that this lengthy game reached its inevitable conclusion. After decades of journalists' sniffing catnip, the laws of nature took their course -- the cats (yes, the meaning of gatti in Italian) pounced.

Elena Ferrante's readers are also the victims of this chase. We filled in the author's absence with the Elena Ferrante of our fantasies, and Gatti's disclosure forced her disintegration from that imaginative space. Most disheartening is the thought that Elena Ferrante may no longer publish, a possibility that makes us excuse the imperfections of Frantumaglia and treasure its fragments of illumination.