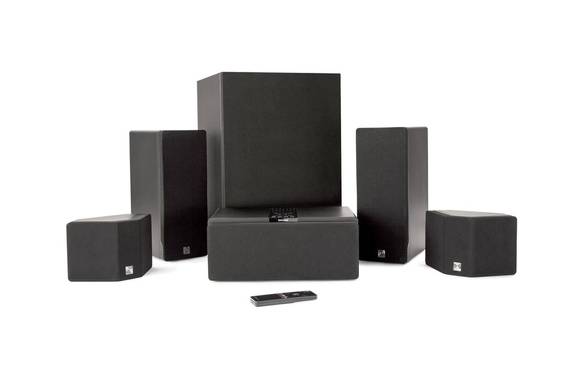 Advertisement
If you're looking for a wireless home theater system at an approachable price, Enclave Audio delivers the goods. Though it's not cheap, the CineHome HD at about $1,200 is thousands of dollars less than the competition (Klipsch Reference Premiere HD 5.1, $4,600; Bang & Olufson BeoVision 11 / BeoLab 18 & 20 (WSJ paywall), $28,000, includes TV), and the sound from this reliable unit is good, albeit a bit thin on the bass.
Some basics: A wireless 5.1 home theater system offers six speakers (five full-range plus a subwoofer) without the need for any wires connecting them to the audio-video receiver (AVR). It's all wireless - and in the case of the CineHome, there's no need (or option) for an AVR either: the center speaker also functions as a basic AVR, with a variety of inputs, outputs and controls.
Advertisement
Let's clear away a few other potential options that actually aren't. "What about Bluetooth?" you might ask. Nope. Bluetooth is scarcely good enough to use with two independent stereo speakers (though a few stereo-capable Bluetooth speakers do exist, such as the fun but pricey UE Megaboom) and just doesn't have the ability to keep six speakers in synch with each other and with the accompanying video.
Of course, Bluetooth is an acceptable way of getting an audio source into an AVR, and many AVRs (including the CineHome) do support Bluetooth for this purpose. But getting audio wirelessly to six home theater speakers is something that hasn't been accomplished using Bluetooth, or with Airplay, which is likewise geared to audio-only, non-surround setups. Another name in wireless audio, Sonos, does offer a wireless 5.1 system, but it's $1,800 and the front audio is delivered via a soundbar rather than three independent, immersive front speakers that give you real separation.
So on to the CineHome. Unboxing and placement was simple, since each speaker is labeled. They're basic black boxes, nothing fashion-forward, and the front left and right speakers are a bit tall (12"), but the build quality is great and the ease of setup is welcome (just plug them in!). The rear speakers are a nice angular bipole design that spreads the sound. All speakers connected to the center unit flawlessly, and in my experience over weeks of testing have never lost connection. The wireless technology, which is known as WiSA (and which does not use or conflict with your WiFi), just works. The power light glows bright blue on the center unit when the system is off, then dim blue (less disturbing in the dark) when the system is on. It's unintuitive, but you get used to it.
Do know, however, that you've traded one set of wires for another: the six speakers all have AC adapters that need to be plugged in (although the company says that battery kits are targeted for Q4 of this year). As a result, you may end up with a traffic jam near your screen, as your TV, four front speakers (left, center, right, sub) and multiple source devices (Blu-ray player, Roku, set-top box) compete for space at your power point. So get a multi-outlet surge suppressor like the Quirky Pivot Power (or here), which flexes to accommodate oversize outlet hogs.
Advertisement
The center speaker has three HDMI inputs, a TOSLINK optical audio input, a 3.5 mm audio input and an HDMI output. Three HDMI inputs is a bit skimpy - most AVRs have at least five - but if you need more, you can finesse the issue with an HDMI switch. A wide range of switches are available, including ~ $10 options with and without remotes, but these low-priced switches can sometimes be flaky. I've been happier with a somewhat more expensive J-Tech unit that includes a remote and audio extraction capability (a feature that's not needed in conjunction with the CineHome, so try this J-Tech unit instead).
Note that there are no composite, component or S-video inputs on the CineHome, so if you have a legacy game system without HDMI you'll need to get a converter. They're generally not costly, but I haven't checked into possible latency issues that could perturb a hardcore gamer.
You can mount the four left and right speakers to the wall using customary mounting brackets, as the speakers include a standard 1/4"-20 mounting hole, or just hang them on a hook or screwhead using the keyhole mounting hole. Surprisingly, though, the center speaker does not include either of these, or any other mounting options. (You might wonder if there'd be room to plug in cabling if the speaker were mounted to a wall bracket, but HDMI cabling could easily be accommodated using these right angle connectors or these.)
In the absence of mounting holes, you can place the center speaker on a shelf on top of the TV itself or on a shelf that attaches to the wall, but you'll want to strap the speaker on the shelf (a must in earthquake country) and (short of DIY) will have to accept little or no ability to angle the speaker up or down so that it points towards the listening position. There are a number of wall shelves available but this one (not tested) is the only unit I found that's at all adjustable up and down. It comes with a strap, but you might also want to use some Blu-Tack adhesive to secure the speaker.

Moving on to electronic setup, the provided options are limited, and are accessed using the small but functional remote or using buttons on the center speaker. You can set the delay independently for each of the two rear speakers, but can't perform the setting in terms of distance, which might be more intuitive than arbitrary units. There is no tone setting or other equalization, and setting the individual volumes for the center, rears and sub is done using a rather obscure set of button presses on the remote rather than by accessing a simple menu. It's an awkward user interface choice, but not really a big deal, since setting the relative volumes is something you're likely to do only once, unless you like to make tweaks for different content.
The center and rear volume settings are in increments above or below a baseline that impliedly is the volume of the front left and right speakers; in other words, you're determining whether (and by how much) you'd like the center volume (and, separately, the rear volume) to be louder or softer than the left / right volume. That baseline (i.e., overall volume) is adjusted in the usual way, with the remote's up, down and mute buttons.
Sound is crisp and clear, without dropouts, static or lip synch issues (tested over many hours with a range of source material - broadcast, Blu-ray, Roku and Chromecast). Those are hard engineering problems, and they've been well-solved by Enclave. The maximum volume without distortion is pretty high, but the company doesn't disclose the number of watts per channel. The unit supports ARC (Audio Return Channel - but enabling ARC on the CineHome and TV disables the 3.5 mm Aux input), CEC, HDMI pass-through, DTS 5.1 Digital Surround, Dolby Digital Plus, Dolby Digital and Dolby Pro Logic II.
On the video side, the company says all common 3D formats are passed through properly and that the CineHome, as an HDMI 1.4 device, will pass through 4K with a maximum resolution of 4096 x 2160 @ 24Hz and 3840 x 2160 @ 24Hz / 25Hz / 30Hz.
Back in the audio world, bass was somewhat disappointing. Even though the subwoofer is 8" and its cabinet amply sized, there simply wasn't a lot of low frequency output even with the individual volume for the sub set to its max (via the obscure procedure with the remote; there is no physical volume control on the sub itself).
Advertisement
In a medium sized room (17' x 18' x 8' to 12' high) and listening at about 14 feet away, the lack of bass left the sound feeling somewhat thin, and on explosions and crescendos the subwoofer was unable to rattle the floor, furniture or my stomach. If you're looking for kicking bass, the CineHome may not be the best choice. And coupling the CineHome with a BenQ HT1085ST projector and a Homegear 120 inch motorized screen, as I did, left the audio slightly outmatched. The sound, although perfectly serviceable, just wasn't quite "big enough" to fully carry its weight with the large picture.
For a deeper dive, I did an A/B test, comparing the CineHome against a formerly-pricey, ten-year old wired configuration (Marantz SR7400 AVR, Energy Encore speakers, plus the J-Tech video-splitter / audio extractor) and the difference was noticeable. The wired speakers, which included an 8" sub, rattled the room and whichever body parts I wanted, and had a greater sense of fullness and presence. Dialog was also a tad crisper than the wireless approach, but the primary difference was the bass.
The CineHome performed well, though, in a smaller room, my bedroom, where all speakers, including the sub, were within about 8 feet of the listening position. There, the CineHome was well matched to the 42 inch TV, and would no doubt have done fine with a larger one too. Other compact rooms, such as a den or mancave, would also be a good setting for the CineHome.
A 7.1 version is planned for next year, and might help to expand the CineHome's horizons, especially if Enclave can squeeze more performance out of the subwoofer. No word on whether CineHome 5.1 owners will be able to purchase upgrade kits to buy into 7.1 functionality.
Is the CineHome HD worth the price? Contrast and compare: you can get a popular wired 5.1 home theater in a box (six speakers plus AVR) for under $400, so you're paying a significant premium for wireless, but you get much quicker setup (no wires to run and connect), a cleaner look (no speaker wires) and an easy install with no drilling and no handyman (or handy friend) needed. With Enclave, you're not paying Klipsch or Bang & Olufson prices, and if you're comfortable with bass a bit on the light side, the CineHome HD is a great system and a good alternative to speaker wires for the right sized room.
Enclave provided review product.