Celebrating its national theatrical release, the Sundance award-winning film Fuel held its party and screening at the most appropriate place for its topic, but at a location you don't normally see celebrities and paparazzi: a gas station.

Specifically, the only bio-diesel gas station in Los Angeles, Conserv Fuel in Brentwood at San Vicente and Barrington Ave. The entire affair -- film and TV stars posing with the ultra-cool Tesla electric car, an open bar of organic wines and beers, eco-cups glasses, and chairs lined up under heat lamps between gas pumps -- it was a fitting celebration not just for Josh Tickell's landmark film, but for the same gas station which only months ago had decided to stop selling bio-diesel fuel, until loyal customers voiced their strong support. Not one year before, Barack Obama stood at that gas station and lavished praised upon the green entrepreneurial owner.

The station's struggle is an apt symbol for Tickell's documentary, a sprawling epic that follows Tickell through his quest to spread the message of bio-diesel's promise over 11 years, along with his humbling setbacks. Fuel features appearances from an endless parade of recognizable faces and knowledgeable guests, including luminaries I would love to be able to interview such as Naomi Klein and Robert F. Kennedy, Jr. 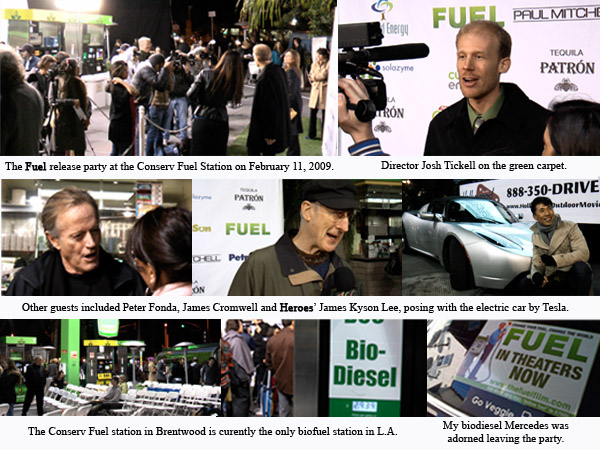 I arrived at the screening in my 1982 Mercedes-Benz 300D, converted to run on vegetable oil. (The inconvenient truth is that maintaining a 25 year-old diesel car is fraught with frustrations, but none about the fuel.) I brought an old friend and social doc filmmaker with me, Matthew Cooke, who like myself has seen the thesis of his film overtake his life for years and actually grow into split projects.

As a documentary filmmaker passionate for change, I could appreciate Tickell's tremendous journey, but I could appreciate even more the ways he weaves it in to the many complex issues he does justice to. In Matt's case, his film in progress has focused on the Media, mine on political corruption in Ohio. Matt's film Deliver Us From Evil was nominated for an Oscar, losing honorably to An Inconvenient Truth. We agreed that it is regrettable that Fuel was not nominated for an Oscar this year (though it made the short list), and that documentaries bear the added weight of being considered not just on style and substance, but on relevance. And we concurred that Fuel is one of the most important films of our time.

I will dispense with overly summarizing Tickell's well-plotted, brisk film that unfurls one tangible reform after another in a flow that might disarm a viewer used to seeing solutions only at the end of a movie. Just see the movie, people. That's why he made it. I'm not going to simplify anything in it after he has spent a decade putting this masterpiece together.

But I won't cop out entirely. (Ahem.) Josh Tickell was born in Australia, playing in the waters and with wildlife growing up. When he moved to Louisiana as a boy, he realized the rampant pollution in a state where most of the country's gasoline is made. The toxic reality of living near oil processing plants that actively pollute as much as they can, and then have hundreds of "accidents" a year to dispose of even more waste, is why Tickell's 200-mile stretch along the river in Louisiana is dubbed "Cancer Alley." Tickell's mother powerfully recounts her inability to conceive, one of many health issues in the area. And there are hundreds of Cancer Alleys around the world where gasoline is processed from oil. Tickell discloses his personal bias in this film at that point, as if it needed justification.

Where many filmmakers may crusade on camera, Tickell's crusade has already been long running. He has driven around the country for years in a bio-diesel bus educating people about how to make your own bio-fuel, landing on the "Today" show and getting celebrity support. But as Tickell keenly observes, as an activist, you are faced with many setbacks of doubt, that your message is not getting out. The film weaves his travels to Europe to explore countries that are thriving on putting bio-diesel in their diesel cars. He returns to Louisiana on a bio-diesel powered boat with relief supplies after Hurricane Katrina. The oil spill in the wake of Katrina is as big as the Exxon Valdez, but no state politician has asked to hold the oil companies accountable to clean it up. The climate implications of global warming and a fossil-fuel economy are considered in the rise of hurricanes. These are just some of the many different impacts Tickell points out along the way while showing the web of ways oil poisons us in ways we don't consider. For instance, school buses pollute diesel smoke, trapping children with exhaust fumes, that could instead be run on bio-diesel, like in Las Vegas, NV.

Here are just some of my favorite parts of the film thrown out in no particular order. RFK Jr. on the loss of American greatness: "We put the oil before our bill of rights." Naomi Klein intoning: "The problem is not the dependence on foreign oil, the problem is the imperialist mindset." The compelling story of Rudolph Diesel, brilliant inventor who patents the diesel engine in 1882 in hopes of empowering the farmer to grow the fuel for America, and his mysterious death in 1905 on a cruise ship.

A similarly suspicious hit-job befell the good name of bio-diesel. In 2008, Tickell saw the progress he made become vanquished by two obscure scientific articles plastered in over 600 articles worldwide, blasting bio-fuel for its devastating potential to usurp the world's food supply. Instead of simply tracing the influences in disseminating the origins of a petrol-friendly report, Tickell shows how food is already overproduced and exported in America, undermining other economies from developing their own self-sustaining agriculture. He also places bio-fuels as just one component of an overhaul necessary for our society's energy, which include wind, solar, and algae development. Algae grows many times faster than crops, and can produce the same usable vegetable oil. How much to create a desert aquatic processing plant which could provide enough bio-fuel power for the country? $25 million. (That's a line item in an important bill just waiting to get jumped on by Rush Limbaugh's ditto-heads because it's something they don't understand. Wait until they see how algae can be grown in cities around the world through processing human waste.) You owe it to yourself to open your mind to the dizzying number of ways bio-diesel could already be integrated into our life, and be inspired by the eco-opportunism in new industries that are the only growing sector right now.

Leaving the screening, Matt and I agreed that when you have a media that refuses to cover essential stories such as our fuel supplies, these are the exact kinds of films that need to be made, and made widely known. Finding re-surging relevance under the Bush years, documentaries serve as one of the last bastions of journalism. It is only through these films that vital information can get out and change can really happen.

Go see Fuel. (Carpool.) And then go change the world.