Kent Russell is a hell of a good writer. His first book, I am Sorry to Think I Have Raised a Timid Son (Knopf, $24.95), a collection of essays published earlier this month, is the most compelling and engaging book you'll read this year.

With his fresh, honest voice, Russell profiles some fascinating people you've never heard of before: a childhood friend who served in the 82nd Airborne Division in Afghanistan, an amateur herpetologist trying to defeat snake venom one bite at a time, two troubled hockey players, the juggalos, a special effects horror master, along with a bon vivant conman neighbor and his father, a Vietnam war Swift Boat operator, among others.

Russell's tremendous gift for quickly transcribing human relationships into powerful shorthand is on full display in "Ryan Goes to Afghanistan", a 2011 essay that received well-deserved critical praise at the time, landing on multiple "best of" lists.

It's easy to see why.

"Old Papa, he stormed the beach when he was eighteen years old," Papa Lou said. To which Papa dutifully responded, "Well, those dirty Japs, they should be our slaves."

Ryan, Russell's childhood friend, came from a hardscrabble family and was practically adopted by the Russell family. Russell's father made him sandwiches and fed both boys stories of martial prowess. Russell's father always envisions him following in his footsteps and joining the Navy. But when the USS Cole is attacked, Russell's father suddenly envisions his own boy lying bloodied on the deck of a ship and changes his mind, forbidding Russell to sign up.

There's a great scene in Tobias Wolfe's memoir In Pharaoh's Army where he fantasizes about masked men coming on board the idling bus leading him and his ranger classmates away to a plane, ultimately to Vietnam, and kidnapping them.

Hijackers. A gang of hijackers in front of a barricade, wielding shotguns and pitchforks and clubs, shining bright lights into the driver's eyes. The driver stops. The hijackers pound on the door until he opens it. They come up the steps and down the aisle, flashing their beams from face to face until they find the ones they're after. They call our names, and then we know who it is behind the blinding lights. It's our fathers. Our fathers, come to take us home.

But not as crazy as what they actually did, which was let us go. 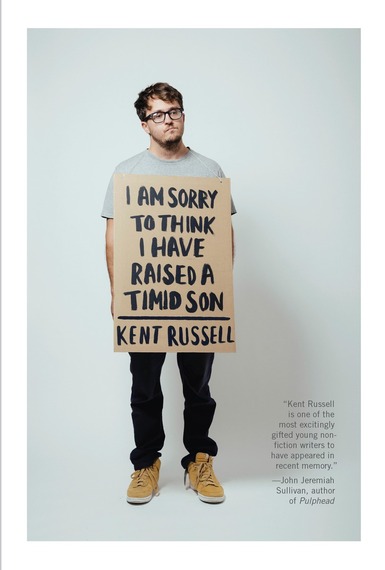 Russell brilliantly builds up the portrait of his father as a man obsessed with the martial tradition, only to reveal that his love for his son was the more powerful of the competing emotions.

Some, with the level of dedication found in book reviews based off a skim of a Wikipedia article, took the title at face value and concluded that Russell was taking a whack at his own mean old dad. Not so. The whole book is actually a big sloppy complicated love note to Russell's father.

Russell's meditations on his father don't reach the filial hagiographical summit of To Kill a Mocking Bird but there's still a huge cube of sugary love atop the absinthe of critical examination.

The title of the book comes not from Russell's father but rather Daniel Boone. Boone goads an insufficiently bloodthirsty son into signing up for one of America's minor genocides, with the boy's big payoff having Daddy toss his corpse in a mass grave.

Ryan did enlist. He became a combat infantryman (SAW operator) in Afghanistan. When Ryan returns, he tells Russell what it was really like. In a few pages, through Ryan's voice, Russell demolishes the Potemkin storyline of American Sniper. Brave soldiers yes. But a bullshit war, more like a gang fight. Ryan is a mixture of earned bravado, crackpot realism (Red Dawn fantasies) and realism (the guys they were fighting didn't have shoes).

Rudyard Kipling, an avowed British imperialist in addition to a beloved children's author, chose differently than the elder Mr. Russell. When World War I broke out, he was intent on having his only son Jack sign up. When Jack was rejected for poor eyesight, Kipling pulled strings and got him into the Irish Guards. Jack was quickly killed in France, half of his face blown off by a shell before disappearing in No Man's Land.

It is hard not to think of the Iraq War as America's World War I, with Clint Eastwood our Rudyard Kipling, a children's story writer for adults, with the difference that this time the elites did not rush to sign up their children for the glorious campaign. Instead, it was the Ryans who went. And what of that?

There died a myriad,
And of the best, among them,
For an old bitch gone in the teeth,
For a botched civilization.

For two gross of broken statues,
For a few thousand battered books.

It is sad that there have not been more clear-eyed examinations of our Afghanistan and Iraq follies such as Russell's.

In his craft, Russell reminds me a bit of an updated David Foster Wallace, with a typical sentence or paragraph combining straight descriptive observation, some observation blended with analysis, and the occasional wry deconstruction of (or counterpoint to) the preceding observations and analysis.

But, as an essayist, Russell doesn't follow the paint-by-numbers long form essay tricks of an alternating paragraphs dealing with The Subject's Story / My Voyage to Examine the Subject, Her Background and Third Party Analysis of Subject / Placing it all in a Broader Context.

Instead he weaves personal observations in with straight reportage and frequently questions his own takes on things. This may be offputting to some, used to the God-like certainty of Michael Lewis or Malcolm Gladwell. But I found it effective and disarming.

Wallace, in his classic 1996 tennis article "The String Theory", for instance, felt compelled to segue an autobiographical segment with the apologetic "[t]his article is about Michael Joyce and the realities of the tour, not me. But..." before explaining his own experience as a competitive tennis player. Russell feels no such compulsion. His stories are tremendously personal. He turns to the camera constantly and doesn't need a mouthpiece or anecdote to frame his observations.

I am Sorry to Think I Have Raised a Timid Son was released March 10, 2015 by Knopf and is widely available.