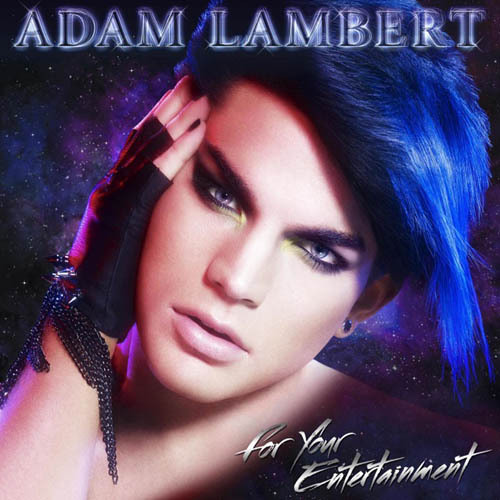 Adam Lambert "For Your Entertainment" (19/RCA)

Ten or twenty years from now, when people are reflecting on the defining albums of the current pop-synth-glam revival, For Your Entertainment will undoubtedly be at the top of many lists. From its packaging to its songs to the persona of Adam Lambert himself, it seems to comprehensively represent a distinct cultural and musical zeitgeist. "I wanna start a revolution," Lambert sings in "Strut," and for Lambert, the revolution emanates from within the fantastical alternate reality he conjures. It is a nod to Sixties psychedelia, Seventies disco, and Eighties glam-pop. But Lambert and his array of creative partners somehow manage to synthesize it into something fresh and current.

This doesn't mean For Your Entertainment is a perfect album. The "glam" genre itself implicitly carries certain strengths and weaknesses and Lambert's debut will likely be assessed by the degree to which these matter to people. The album, for example, mostly lacks the emotional subtlety of some of the singer's best moments on American Idol ("Mad World," Tracks of My Tears," etc.; the stunningly haunting "Broken Open," co-written by Lambert, is a notable exception). It also generally refrains from major risks or social commentary. But an album like For Your Entertainment is best understood and experienced according to its own criteria. What the album generally concedes in depth, it makes up for in sheer energy, playfulness and pleasure (this, indeed, was Lambert's intention). It is best viewed, then, not as a final statement, but as a starting point, a launch pad to what is certain to be a fascinating (and evolving) artistic career.

For Your Entertainment certainly isn't lacking in potential hits. "Music Again" is the sonic equivalent of the album cover art--a deliberately campy, effectively updated glam rock homage to several of Lambert's inspirations (Queen, David Bowie, T. Rex). The result is an invigorating, sing-along opener that will sound fresh and unique next to most contemporary Top 40 material.

Lambert re-visits some of these retro themes in "Soaked," a flourishing Queen-meets-Streisand-like ballad contributed by Muse, in which Lambert is able to demonstrate his remarkable vocal range. The racing strings and piano add an exotic melodrama to the song.

Generally an uptempo dance record, Lambert does slow it down occasionally. The singer's effortless falsetto is gorgeous on the spacey ballad, "A Loaded Smile." The radio-friendly "Whataya Want From Me," while deploying some tired pop cliches in the chorus, still makes one of the album's more poignant emotional statements, anticipating the heavy burden of expectations the singer is likely to carry while expressing vulnerable appreciation for the acceptance he has received. "I'm a freak," he sings, "but thanks for loving me/ 'Cause you're doing it perfectly."

For Your Entertainment, however, primarily operates from a disco/glam aesthetic of escapism and liberation via dance, dress-up, and desire. This intention is on full-display in club-ready hits like the title track, "Strut," "Fever" and "If I Had You," all of which fully accomplish what the singer had in mind for the album: songs that make you want to let loose, dance, work out, have fun.

The album's hidden gem, however, is the closer. An ethereal electro-soul ballad, "Broken Open" is a powerful expression of loneliness, vulnerability and yearning for connection. Sonically, it feels like it belongs alongside Thom Yorke, The Killers, and Grizzly Bear on the New Moon Soundtrack.

"Aftermath" is perhaps the lone glaringly weak track, hearkening regrettable Idol anthems like "No Boundaries." Yet this is a small quibble for an album so viscerally enjoyable.

As a whole, For Your Entertainment marks one of the most impressive mainstream pop album debuts in recent memory, along with its trailblazing sister-album, Lady Gaga's The Fame. From its kitschy cover to its memorable hooks, Lambert's appropriately labeled album contains all the elements of a successful--and influential--pop-rock classic. Fortunately for fans, it only seems to be scratching the surface of its creator's potential.

Note: This review has been altered from its original version.