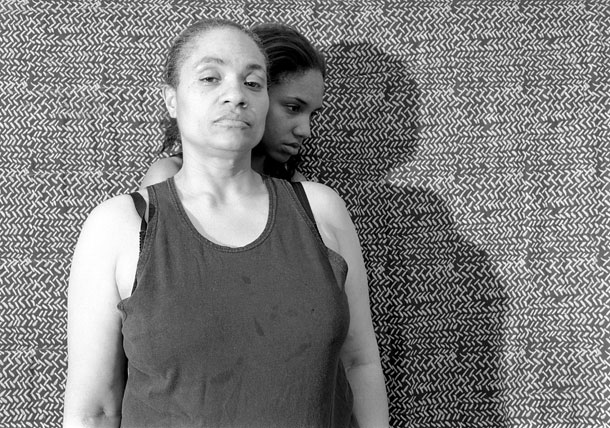 In 2008, photographer and media artist LaToya Ruby Frazier learned that her mother and Grandma Ruby, like many of the elder women in her hometown of Braddock, PA, had cancer. The information prompted Frazier and her mother, with whom she frequently collaborates, to begin experimenting with new approaches to chronicling the family's illnesses (Frazier lives with lupus). These mother-daughter experiments produced Shadow (2008), one of the approximately 40 photographic works featured in the artist's first New York solo exhibition, LaToya Ruby Frazier: A Haunted Capital, which is on view at Brooklyn Museum through August 2013.

Shadow (2008) captures Frazier standing in front of a makeshift studio/stage composed of a vertically-positioned, comforter-clad mattress, her eyes avoiding the piercing gaze of the camera. She slumps behind her mother, who, in the foreground, strikes a protective pose and challenges the camera with a glare. Their bodies mesh: in sickness, death and a desire for good health. Uncannily, a large shadow looms over both of their shoulders, at once marking the absence and presence, life and death, love and loss of Grandma Ruby. Like many of the photographs in this outstanding exhibition organized by Brooklyn Museum's Eugenie Tsai in concert with Frazier, the force of the image comes, in part, from the ways it evidences the purchase that the unknown--that is, the unseen, the unheard, the unacknowledged, the unremarked; death and loss--has and the demands it places on conceptions and experiences of the real.

A question that reverberates while encountering each of the striking black-and-white photographs included in the exhibition is: What might be uncovered or gleaned in the shadows? It is a question central to Frazier's photographic practice, which blurs, blends, and bends the conventions of portraiture and social documentary to challenge investments in narratives of progress and, powerfully, to render present histories and realities that are often absented.

To be sure, Braddock, and the many towns like it across the U.S. that have been ravaged by deindustrialization, lurks in the recesses of the national imaginary. It's been consigned there by a collective desire to repress what its trajectory from a bustling mill town to, as the state describes it, a "distressed municipality" perhaps signals: namely, the limits and failures of capitalism. Frazier confronts these deficiencies head on in works such as The Bottom (2009). In the photograph, a discarded vehicle is set against the backdrop of Braddock's BOC Gases plant. Untamed grass, downed power lines and a broken fence surround the formidable monolith. If each of these "emblems of progress"--the vehicle, plant, power lines, fence, and, even, the landscape--once held promise, Frazier's image illuminates what that promise has generated: the twin realities of abandonment and neglect.

Frazier ruminates further on these twin realities in Fifth Street Tavern and U.P.M.C. Braddock Hospital on Braddock Avenue (2011), which showcases the debris left behind in the wake of the decision made to raze Braddock Hospital due to its purported financial losses. The photograph documents how what was once a site of tremendous activity and a critical space for the community--indeed, another photograph, Grandma Ruby and U.P.M.C. Braddock Hospital on Braddock Avenue (2007), shows Frazier's grandparents seemingly en route to or from the hospital when it was still intact--was dispensed with and destroyed in the name of capital.

But even while others have left Braddock behind, Frazier refuses to abandon it. In focusing her lens on the relatives and town that raised her and, indeed, on herself, the photographer offers powerful statements about the enmeshments and vicissitudes of family and community histories. Grandma Ruby, Mom, and Me (2009), perhaps the most stirring inclusion in the exhibition, examples this best. The photograph sees Frazier and her mother standing in front of an open casket housing the lifeless body of Grandma Ruby; flowers, dolls and various other pictures adorn the surrounding room. Each woman, three generations of a Braddock family, wears a peaceful look on her face. Frazier's eyes, which she fixes on the camera, prick.

The image sparks myriad questions about the ways Braddock's industrial history has perhaps contributed to the three women's illnesses and about whether the cause of Grandma Ruby's death was the pancreatic cancer that plagued her body or the broken heart that years of witnessing the decline in her once thriving community wrought. What becomes rather clear in viewing the work is how nearly impossible it is to disentangle the death of Grandma Ruby from the facts of Braddock's demise and, surely, the grief experienced by both Frazier and her mother in the wake of these significant losses.

As with each of the photographs exhibited in LaToya Ruby Frazier: A Haunted Capital, embedded in Grandma Ruby, Mom, and Me (2009) is a revelation about the ways that the unknown--death, loss, absence--and the unknowable--those things repressed in the recesses or relegated to the shadows--haunt our realities. These hauntings act on and move through us, commanding attention and demanding their due; they do this even more emphatically when we try to deny them. To be sure, what marks Frazier's photography as particularly absorbing and the exhibition as a triumph is the boldness with which she engages spectral matters. These engagements yield myriad insights about race, sex, class, capital, history, time, family, death, loss, the environment and the many ghosts that trouble them all. Indeed, along with Frazier's critical eye, these engagements are what make a visit to Brooklyn Museum to see this impressive photographic series an absolute must.