Let's begin by acknowledging that Mark Morris is a genius. His best dances -- Gloria, L'Allegro, il Penseroso ed il Moderato -- tug at us powerfully. He can align steps and music in a way that transports.

Like every great artist, Morris has had his share of flops. But his more recent ones don't seem like failed experiments; they don't try to push into new territory. At this point in his career -- he's already been canonized, essentially, as a dance saint -- he's discovered his formula: choose a great piece of music, construct an earnest dance with a hint of cheek and a few signature motifs. When the alchemy is right, he makes masterpieces. When it's not, though, he looks like a caricature of himself. And because the dances that don't work still contain all the characteristics audiences expect from a "Morris dance" -- and, to be fair, often have little flashes of magic -- he gets away with them.

The Mark Morris Dance Group opened its performances at the Brooklyn Academy of Music last week with Four Saints in Three Acts, set to an hour-long excerpt from the Virgil Thomson-Gertrude Stein opera. Theoretically the opera tells the story of 16th-century Spanish saints Teresa of Avila and Ignatius of Loyola. But, in typical Stein madcap fashion, the libretto has little to do with anything but words. ("To know to know to love her so," the prologue begins. "Four saints prepare for saints. It makes well fish.")

On paper, Four Saints seems like a good fit for Morris, who loves words. He likes to treat them literally, devising allegorical movements that appear each time certain ones are said. (When he choreographs to works that aren't sung in English, he often projects a translation above the dancers, to make sure we aren't missing these step-to-word parallels.) It's a strategy that works beautifully in his treatments of Henry Purcell's Dido and Aeneas and Erik Satie's Socrate; the literalism orients us in those narratives, pushes the stories along, buoys them. 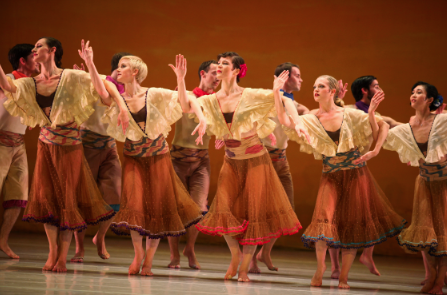 But in Four Saints Morris' faithfulness to the libretto doesn't register with the same power, because there is no story. There's some wry humor in the way he illustrates Stein's witty nonsense -- when Saint Teresa sings, "chain left chain right chain chain is it," and the dancers respond by interlocking and re-interlocking their arms, looking left and right on cue, we chuckle. All we get out of it, though, is that Morris is in on Stein's joke. The lush, velvety Michelle Yard makes the best of her lot as Saint Teresa; there are some fun Spanish sevillanas for the ensemble; the Trinity Choir masters the fiendish task of enunciating Stein's tongue-twisters. But in the end there's not enough dark to counter all the light and silly, and Four Saints ends up bordering on twee.

A Choral Fantasy, the world premiere that closed the program, fares much better. It has Beethoven on its side -- his Fantasia in C Minor for Piano, Chorus and Orchestra, Op. 80. The oft-cited saying is that you can't dance to Beethoven, perhaps because he tends to hammer at his themes, repeating them, to some tastes, ad nauseum. But Morris doesn't care much about old adages. And thank goodness, because the Fantasia in C Minor is glorious. The finale has some not-so-subtle hints at the famous "ode to joy" theme that appeared in Beethoven's Ninth Symphony some years later, and it's similarly intoxicating.

Isaac Mizrahi costumed the dancers in faux-militaristic jumpsuits. Morris has the wiry, wily Amber Star Merkens as the general leading these troops: She tends to dance to the piano part, while the other 14 dancers embody the rest of the orchestra. There's a lot of swirling canon; everyone is in near-constant motion, particularly as the score accelerates toward its climactic end. But while a few moments register distinctly -- a sort of stylized secret handshake, a développé à la seconde accompanied by a headshake -- you walk away remembering how wonderful this dance made you feel rather than how it looked. The formula worked; the alchemy was right. This time around, Morris made gold.

--------
A former dancer and choreographer, Margaret Fuhrer is an associate editor at Dance Spirit and Pointe magazines and a contributing editor at Dance Teacher magazine.