If you hurry to the Broad Stage before April 24, you might just catch the best Merchant of your life -- The Merchant of Venice, that is, Shakespeare's tragi-comic masterpiece, often performed, but rarely performed well. In a dynamic and cleverly contemporized production from New York's Theater For A New Audience, The Merchant is again made fearfully relevant, 400 or so years after its composition, when we (surprise) again occupy a society where money, power, and religion combine in ugly ways.

And yes, when anti-Semitism is again on the rise, worldwide. 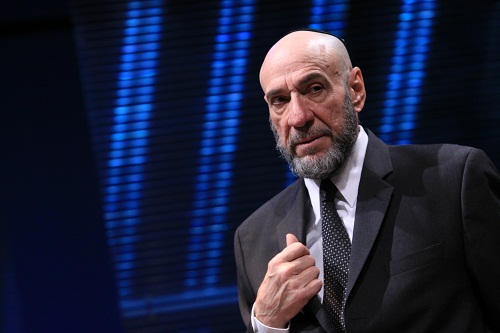 In case you don't know the tale: in multi-ethnic Venice, Young Bassanio, owing a large sum of money, gets his friend Antonio (the Merchant) to borrow a pile of ducats from a Jewish moneylender, Shylock. Shylock, many times insulted by Antonio in the past, makes the following bargain: if Antonio does not pay back the ducats within three months, Shylock will take a pound "Of your fair flesh, to be cut off and taken/In what part of your body pleaseth me."

Not just revenge, but love is in the air. Shylock's own daughter runs off with a Christian, and Bassanio tries to win the fair, wealthy, and very smart Portia by answering the riddle of her three caskets.

The themes go well beyond Jew vs. Christian and loyalty vs. self-interest, to the limits of friendship, and the uncertain meaning of justice. Shakespeare arranges a situation in which some evil and some good is created by every move. This is not just the true condition of life, but of course, depending on the moment, even producing Merchant of Venice may cause both good and evil in the world.

In this production, Portia's "caskets" are MacBooks, and the riddles appear in flatscreen monitors above the stage. It sounds like silly shtick, but Tresnjak both pulls it off, and yes "contemporizes" the tale for a "New Audience." This production not only gets The Merchant right, but resharpens its knives.

Jokes are broad, frequent, and only a very few pull us inappropriately out of the tale (special mention to character actors Jacob Ming-Trent as Launcelot and Raphael Nash Thompson as the Prince of Morocco for top-notch Shakespearean clowning). Most remarkably, perhaps, the production makes no effort to downplay the anti-Semitic aspects of the play, but explores them deeply. You will often squirm.

Abraham does not overly ennoble Shylock -- a common failing. Following Shakespeare's intention, his Shylock is a distinctly unlikable schemer who we nevertheless pity. Abraham is a master Shakespearean, and brings out all the subtle nuance and hidden human touches in the text.

Indeed, elegant touches, and a careful thinking of the text arrive at every turn. For example in the courtroom scene, so often played as "Portia totally in control," we see her struggling to solve the riddle of how to thwart Shylock. Her solution seems more improvised than wise -- and of course, three minutes after her beautiful speech to Shylock about "the quality of mercy," she fails to show mercy to Shylock himself.

Kate MacCluggage is a charming, forthright, and rather more feminine Portia than one usually encounters. At first, you wonder if she actually has the credibility to pull off the courtroom scene in Act IV. Ultimately, we like her for her beauty and wit, but not for her "judgment." A perfect compromise.

Much of the play's ultimate impact depends on the attitude of Jessica, daughter of Shylock -- who loves a Christian, Lorenzo, and runs off with him to convert. Always, her own judgment on Shylock is the most difficult for both him and the audience to handle. Melissa Miller plays the part perfectly -- happy in love, yet the shadow clearly crossing her face. There's a wonderful scene where the truth intrudes on her and Lorenzo, dressed in bathrobes, ready to make love. Exactly right.

Other standouts include Vince Nappo as the likeable Lorenzo, Ted Schneider as the hilarious corporate frat-boy Gratiano, and Jonathan Epstein as the morally-ambiguous "Merchant" Antonio. Graham Hamilton makes for a sympathetic and believable Bassanio, and we really do want him to get the girl.

The Merchant of Venice is ultimately and structurally a comedy, ending with the usual Shakespearean joy in love and marriage. Again, this production finds just the right tragic-comic note, and there's a marvelous moment when all the happy "winners" have their uncertain celebration -- you sense the unease, but no one onstage is quite aware of what has occurred.

Once again Shakespeare has reminded us how precariously a civilization balances on the knife-edge of tolerance. How easily one loses one's humanity. How rarely one encounters genuine understanding. How glibly we speak of "mercy" but how infrequently we enact mercy when it is actually needed.

This review originally appeared at www.laopeningnights.com.