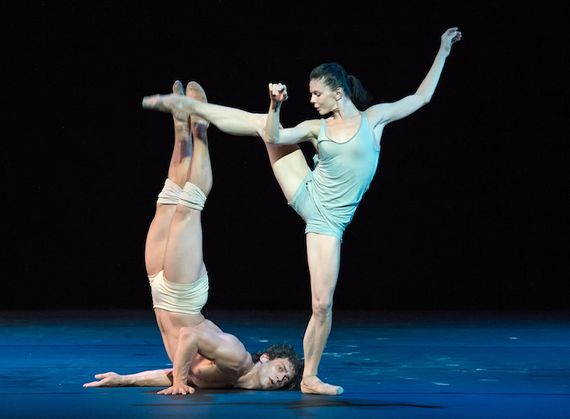 I have to hand it to Natalia Osipova and Ivan Vasiliev. Easily the world's most exciting ballet couple, they could probably spend the rest of their careers performing Don Quixote, and still pack houses every night.

But the erstwhile lovers didn't leave the Bolshoi and Mother Russia three years ago to play it safe. Citing the need for "greater artistic freedom," they headed west in search of new opportunities -- she with the Royal Ballet, he with American Ballet Theatre -- and on Wednesday night at the London Coliseum, they reunited for one of their greatest challenges yet.

It wasn't all smooth sailing -- the choreography didn't always do the dancers justice, and the dancers appeared to struggle with some of the idioms of contemporary movement. Overall, though, Osipova and Vasiliev still wowed with their overwhelming star power, made all the richer by their clear hunger for artistic growth.

The evening opened with Cherkaoui's "Mercy," which combines two pieces that he originally created for Ballets de Monte-Carlo. It starts disturbingly with Vasiliev "beating" Osipova, their jerking movements a stark contrast to the serenity of the live, sacred music. Vasiliev then performs a gorgeous solo; writhing on the floor, contracting and opening his chest and flinging himself in the air at all angles, he expresses the torment of someone who still loves the woman he has abused.

Osipova then re-enters to find Vasiliev disconsolate on the floor. With confidence and sensuality, she shows affection for Vasiliev, using her love to wrap him around her little finger (or more precisely, her pointe shoe). By the end, it seems they've made their peace, but even the harmony of the lovely, if oddly placed, Indian raga doesn't convince --the "reformed" Vasiliev still appears to control Osipova by puppet strings.

According to Cherkaoui's program note, the message is that "even if someone does something horrible to you, you can still return tenderness back." To me, it seems to be more about abuse and codependence, but even so, Vasiliev and Osipova deliver a compelling performance. Thanks to their physical virtuosity and emotional daring, they movingly portray the distortions and manipulations of a dysfunctional relationship, however unpleasant they may be to look at.

Next, Naharin's "Passo" provides an interesting change of tone and style -- for the audience, and most certainly for the dancers. Naharin's distinctive style, known as Gaga, alternates formal structure with explosive bursts of chaos, often combining balletic, robotic and pedestrian movements all in a single phrase. It clearly requires a great deal of control, but not necessarily the kind you get from classical training.

The result is that Naharin's style doesn't look quite natural on Vasiliev and Osipova; particularly in the beginning, they look, well, like ballet dancers trying to do Gaga. But as the work progresses, and minimalist music by Autechre gives way to English folk songs, the choreography turns more lyrical and humorous, and the dancing more comfortable and authentic.

Concluding the evening, Pita's "Facada," Portuguese for 'stabbing', tells the story of a vengeful, jilted bride. In a program note, Pita suggests this could be the back-story of Myrtha, the wili queen from Giselle.

"Facada" starts well before the curtain rises, with a Portuguese Fado music prelude by Frank Moon. A cool, elegant blonde in black (Elizabeth McGorian) sits on the stage, bridal bouquet in hand, as if she is waiting with the rest of the audience for the main event. Finally, it happens: the curtain rises, and Osipova bursts in as a beautiful, barefoot bride. She dances in ecstatic anticipation of happily-ever-after, but things quickly turn ridiculous: Vasiliev flees from the altar screaming like Tarzan, and Osipova literally cries buckets, which the woman in black uses to water her pots of white flowers.

Dramatically gifted as the dancers are, the silliness of "Facada" doesn't really allow their talents to shine through. Only at the end, when the bride finally gets her revenge, do we finally get to see a delightfully darker side of Osipova: having put her groom in the ground, she primally dances on his grave, making it clear that there is much more to her than the classical heroines she so often portrays.

So is Solo For Two a perfect program? No, but Osipova and Vasiliev are clearly giving it their all. It takes guts to step outside the comfort zone, as they have, but they've shown time and again that if anyone can thrive there, it's them.

'Solo For Two' runs at the London Coliseum through August 9. For tickets and more information, visit www.eno.org/whats-on/other/solo-for-two.