Indie rock/pop trio Paper Route, comprised of JT Daly, Chad Howat, and Nick Aranda, is doing everything right: the band's music creation began as a remedy for Daly's insomnia, they've had touring experience with major players in the game and announced their own headlining tour this fall, and they recently secured a massive sync deal for their single "Chariots" in the FIFA 17 video game's official soundtrack. All this to build upon the Nashville-formed trio's swiftly-approaching album release for Real Emotion, which will hit the streets on September 23 from Kemosabe Records/Sony.

Where Real Emotion stands apart from its peers is in its understanding of aural palette-cleansers. Bigger, anthemic swells in the album are often preceded and succeeded by atmospheric, ethereal lulls, offering solace to the listener whose potential to be sonically overwhelmed is quelled. The band "wanted the most amount of energy with the least amount of elements," which it's successfully achieved with highlighting and enhancing those select sounds without muddying the water. A focus on "the importance of the drums and beats, the low end, and...melody" is evident from track to track.

Real Emotion doesn't waste any time getting to the point, adeptly going from zero to sixty as the first track "Intro" transitions from its distant, distorted pleas to electronic rock ballad "Writing on the Wall." This song is fascinating in its genre-ambiguous construction, having components from so many different types of songs blended into one. And on that high note, the album continues with lively piano and percussion with "Pretend." This track is simply an expertly-crafted rock song. The track is perfect for radio play, and it would likely do well as a single. Daly's vocals walk the divide between commanding the room like Bono in a U2 song and lost-in-the-moment Adam Levine falsetto. From ending on a high note with "Pretend," the album continues with "Chariots."

Now, it's clear why Paper Route chose to highlight "Chariots" as one of its singles from Real Emotion: this track has enough standalone street-cred of its own to carry itself. The track finds a way to consistently add more sound effects, more percussion, and more instruments into the mix without inundating the song. What's left is an obsession-inducing, toe-tapping anthem that does what so many songs cannot: "Chariots" can be enjoyed actively and passively. Whether in a line-by-line lyrical breakdown or as part of the soundtrack to a soccer video game, "Chariots" proves its own worth time and time again.

The up-tempo excitement comes to a near-screeching halt for "Untitled," an interlude if ever there were one. "Untitled" brings the listener back to earth in an almost dirge-like way, with galactic, sweeping synths like in Coldplay's Ghost Stories. Paper Route is able to recreate this blissful euphoria elsewhere on Real Emotion with songs like "Blue Collar Daydream" and "Lara." The juxtaposition between those interlude-like tracks and songs like lead single "Laugh About It" are consistently welcome surprises. "Laugh About It" has a sort of underlying beckoning quality to it that instantly recalls the same notes in Santana's "Smooth." Some of the effects on the guitar recordings evoke a Moog-like eeriness that works surprisingly well when coupled with the fast-paced, feel-good lyrical qualities of the single.

Paper Route set out to create an album that would evoke a sense of nostalgia, a more mature piece of music than they would have created as teenagers. According to the band, "it took a long time to make this album," but boy, was it worth the wait. Real Emotion delivers an album that marries complexity and simplicity, tried-and-true songwriting and unconventional song structure, as well as emotional highs and lows. 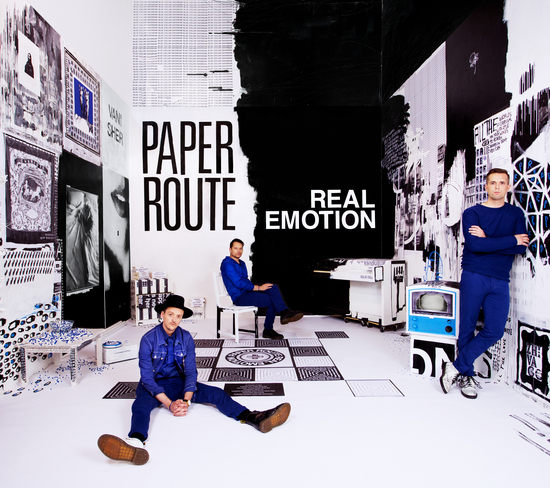