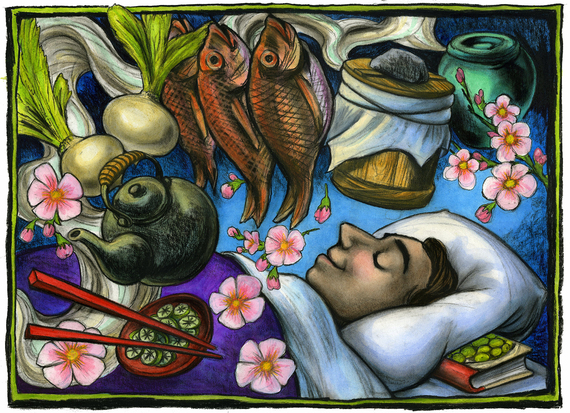 Every American has an idea of what Japanese food is.

Stereotypically, sushi comes to mind, maybe an encounter with tofu or miso, or even perhaps a dinner at one of the various hibachi restaurants in town, where, along with the food, you might also have been singed by the overzealous chef who doused the hot grill with too much oil.

But an ever-expanding genre of cookbooks is exploring the idea of traditional Japanese foods at home. We have Nancy Singleton Hachisu to thank for that.

Her first attempt at converting us to the Japanese way came in the form of her initial cookbook, Japanese Farm Food, a well-received work, which extolled the virtues of locally sourced produce and organic eating, and received several nods from luminaries Joel Robuchon, Alice Waters, and Patricia Wells.

"This book is both an intimate portrait of Nancy's life on the farm, and an important work that shows the universality of an authentic food culture." writes Waters, America's own grande dame of slow food.

Mrs. Hachisu's latest work, Preserving the Japanese Way, is a simple tome, both in style and in its recipes. I found it often on my bedside, a meditation rather than a read, and placed it under my pillow in hopes that I might dream of my own provincial life in Japan.

A colorful idea, and one that our author was guilty of herself, when as a budding student from California she visited Japan and fell in love not only with the country, but also with a native organic farmer.

It is to our advantage that Mrs. Hachisu chose to expatriate herself to the rocky terrain of that Asia-Pacific isle in 1988. She escaped just in time to miss the boom of American competitive cooking shows in the '90s and 2000s, which have increasingly threatened the existence of the remaining home cooks the States have left.

After unleashing the professional kitchen on average viewers, most return to their own rather lethargically, realizing that they have neither the skills nor the accessories to cook what they just watched on television.

Our saving grace comes in the preface of Mrs. Hachisu's book, as she cautions us that every dish need not be perfect, but instead home cooks should "not be afraid to try again."

Practice is harmless within its pages, and without Gordon Ramsay breathing down your neck, shall I dare say it's...easy?

Not uncommon are a plethora of four or five ingredient recipes. Take for example, the chopped vinegared flying fish, which can be made in only minutes after a bit of seasoning with salt, a five minute soaking in vinegar, and a folding-in of squeezed grated daikon. Serve in a small bowl, diced, alongside ginger and added soy sauce, and pair, as the author writes, with sake, "though champagne would also hit the spot."

The lengthiest of the second chapter's recipes is a helping of shishito peppers sautéed with miso and ginger. The resulting mixture of brown rice miso, smoky shishito peppers, one dried japones, and slivered ginger, creates an unfussy meal that serves six.

Try both the flying fish, and the shishito pepper dishes, while waiting for a jar of young shallots to pickle over the next few days in the refrigerator, or as a teapot of brewed green tea steeps for the moment.

The shoyu koji, a rice laden marinade used in place of soy sauce, will test the patience of even those most dedicated to the art of Japanese cooking. Plan on setting aside a moment "every day for 1 week to 10 days, depending on the room temperature (warm room, 1 week; cool room, 10 days)," to stir and eventually combine the rice koji and soy sauce into shoyu koji.

Scattered among the recipes, are panoramic photographs of Mrs. Hachisu's newfound homeland along with profiles and reminiscences of the country's inhabitants.

The snapshots give us an intimate portrait of Japan, and a road map, which allows us to retrace Mrs. Hachisu's footsteps.

By book's end, most readers will have long escaped their everyday kitchen, finding it transformed by the exciting new prospect of adding Japanese food to their repertoire.