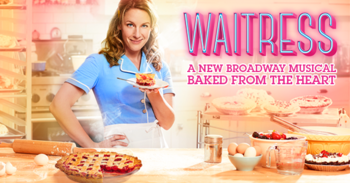 There has been quite a lot of talk about the new musical "Waitress" (located at the Brooks Atkinson Theatre) and its all female production team. However, it is interesting to note that there has been a surprising lack of talk about the show itself. The only talking point for fans and audience members seems to be the music, a pop-song meets Broadway score with music and lyrics by the legendary Sara Bareilles. But what is hiding under her poppy songs and the yummy pie smell that fills the theatre?

The answer: a somewhat decent musical that is fun, enjoyable, and comedic. However, is it superb? Is it i political? Is it new? Is it groundbreaking? Not really.

Although it may not be a radical musical that challenges the genre as a whole, it does have an important lesson about feminism, empowerment, and sweetness. In short: women can do things all by themselves, and everyone deserves a little sweetness in life. The musical itself, while filled with hilarious support characters, emotional ballads, and strong cast, still falls somewhat short compared to the other new musicals this season. But has managed to stay open--more than can be said for "Tuck Everlasting" and "American Pyscho," the musicals that open in tandem with "Waitress"--and people are still talking about it, even if they don't have any specific to say about it.

"Waitress" stars Jessie Mueller as Jenna, a waitress/baker who finds herself pregnant and in a romantic mess. Mueller shines in this role, coasting the audience through laughs, tears, and pie recipes; however, it is doubtful she will receive another Leading Actress in a Musical Tony award this year. Throughout the musical she must choose to stay with her abusive husband, Earl (played by Nick Cordero), or go for her already-married OBGYN, Dr. Joe Potmatter (played by Drew Gehling). In the dinner, managed by Cal (played by Eric Anderson), Jenna waits tables with her best friends Dawn (played by Kimikio Glenn) and Becky (played by Keala Settle).

Both Glenn and Settle give amazing performances as the best friend/waitresses, one filled with quirks and insecurities, and the other bold and sassy. Christopher Fitzgerald (who just won a Drama Desk award), who plays Ogie, the dorky boyfriend of Dawn, did a spectacular job, with each scene, song, and dance routine being funnier than the last. Dakin Matthews was also a wonderful surprise, playing the elderly and wealthy dinner owner Joe, acting like Jenna's grandfather that somehow always made her (and the audience) smile and laugh.

Overall, the show was quite enjoyable, it just was not exemplary in any particular way. The leading actress was good, the supporting cast even better; the ensemble was boring and unnecessary; the design was expected and convention (set by Scott Pask, costumes by Suttirat Anne Larlarb, lighting by Christopher Akerlind, and sound by Jonathan Deans). The songs were one of the most interesting parts, since Broadway musicals are not usually filled with pop-song scores, but in general the songs all sort of melded into a Sara Bareilles/Jessie Mueller I've-heard-this-before sound.

Although it may not be the "most important" musical to see right now and probably won't sweep the Tony awards, "Waitress" provides a fun evening of theater filled with intoxicating aromas of freshly baked pies--and yes, they even sell these delicious concoctions at intermission--so if for nothing else, go for the pie and stay for some fun songs and a couple of laughs.