Over one million people demonstrate in London Hyde Park Anti-War protest February 15, 2003 (photos: We Are Many)

We Are Many, the new documentary produced and directed by Amir Amirani, and executive produced by Wael Kabbani, is a chronicle of the single largest global anti-war protest in world history. Febuary 15, 2003, saw the first coordinated world-wide protests against the U.S. invasion of Iraq. On that day, as the sun rolled across the planet, protests unfolded in 789 cities, 72 countries and included as many as 30 million people. Amirani is the only person who has chronicled the entirety of this massive global event and the people involved. "It was a heroic movement, an epic event," he says. "I felt it had a story and should be told."

Amirani documents the historical timeline leading to war in painstaking accuracy and the documentary is dynamic, visually striking and filled with the desperation felt by the protesters, making the story unfold more like an espionage thriller than an academic retelling. Even though we have all lived through it, the film keeps you on the edge of your seat praying for a better outcome than what history delivered.

What started in London as the 'Stop The War" movement shortly after 9/11, fearing America's reprisals, had several large protests in London throughout 2002. British MP Jeremy Corbyn, (sort of England's Bernie Sanders), was the chair of the Stop The War collation. "We organized protests and they just became bigger and bigger and bigger," he says in the documentary. (Corbyn, considered a polarizing left figure in English politics, stunned all by winning the leadership of the Labor Party just this September.) John Rees, one of Stop The War's movement's leaders said "We thought, why not a global event? But there was absolutely no reason to think it would work," he said. What astounded the original planners is that it took off and worked so successfully. 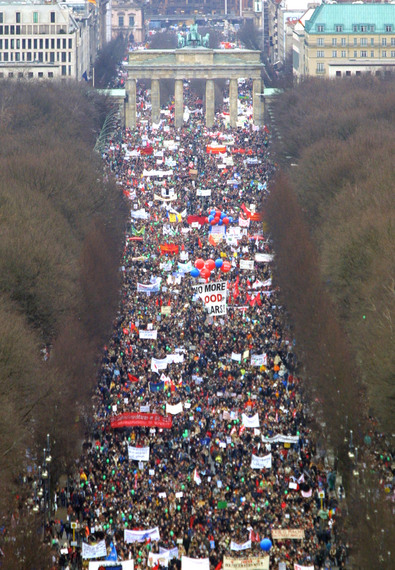 The global event is still a record breaker in many ways. The protest in Rome numbered nearly three million and is listed in the 2004 Guinness Book of World Records as the largest anti-war rally in history. London and Madrid hosted protests of 1.5 million or more. 1 million were recorded in Sydney, the list goes on. There were reportedly 1 million in NY. Remember seeing that on American television? Me either. Our media wasn't spending a lot of time on it.

Starting in 2006, it took Amirani four years merely to track down and contact the original organizers in London and follow the trail across the globe, to seven countries. It took four more years researching and filming the organizers of the German, Spanish, Brazilian, Egyptian, New York and other counterparts to each country's events.

Hans Blix, now famous for his pivotal weapons of mass destruction inspections, and who was head of the Atomic Energy Agency from 1981-1997 and appears in the documentary and was called out of retirement by Kofi Annan, then UN Secreteary General, to lead the Verification and Inspection Committee of Iraq. His deadline to report to the U.N. Security Council was February 14th, 2003. One day before the protests.

If you remember those times like I do, they were fraught with tensions as America was deeply divided about going to war. The Bush administration's intentions were very clear and the incessant drum beat for war in the media about the dangers of Iraq and 'iron clad' proof of weapons of mass destruction were hard to ignore. 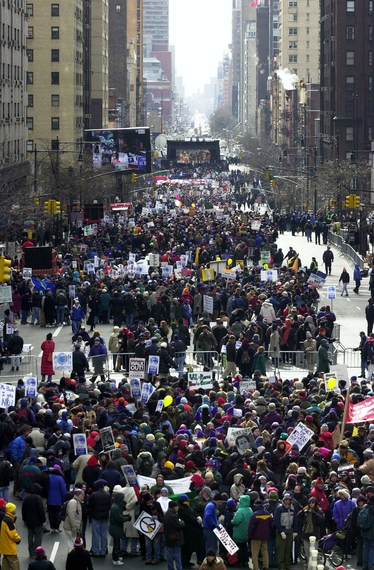 On Feb 5th as CIA director George Tennet sat behind him, Colin Powell delivered his blistering statements to the U.N. Security Council that U.S. intelligence had incontrovertible proof about Iraq's WMD. But on Feb 14th Hans Blix and his colleague Mohamed ElBaradei famously reported to the same body that they found no credible evidence for W.M.D. "We have found no evidence of prohibitive nuclear related activities," they state in the documentary.

The global protests unfolded the next day, and were considered a huge victory by all the organizers the world over. "How could America deny the will of the people across the world?" said one of the organizers in the documentary.

George Bush's cold public response to the record shattering protests; "(The) size of (a) protest -- it's like deciding, well, I'm going to decide policy based upon a focus group,'' Mr. Bush said dismissively. The anti-war community reacted with stunned silence when they realized their protest had no impact. The U.S. attacked Iraq three weeks later on March 19, 2003.

The war was supposed to last a few weeks, as Donald Rumsfeld famously reported to the press. Twelve years later we are still in Iraq, with coalition deaths reported at 4,804, and from between half a million to 1.2 million Iraqis killed by violence.

"That might have been the end of the story," says Amir. "I was originally fascinated with this huge event, and how beyond their successes, they didn't achieve their outcome, and it was sort of a noble failure," he says. "Ironically, it was the length of time it took me in completing the film that I began to see the connections this event had in history. As I was living through them, I began to see how that protest affected the others that followed after it." His research began showing him connections he didn't imagine. 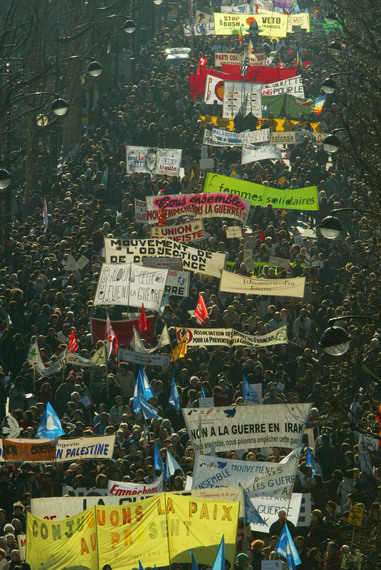 Over one million at Paris anti-war protest February 15, 2003

Ashraf Khalil, an Egyptian journalist in Cairo, remembered: "When we saw what was happening in the rest of the world, and how small the showing was in Egypt, we thought, we have to do something bigger when the war breaks out." In Egypt public protests were outlawed, heavily policed and quickly dispersed. The day of the Iraq war, merely by word of mouth, Egyptian protest organizers had their "March 20th anti-war demonstration." 50,000 people occupied Tahrir Square in Cairo. Gasser Abdel Razek, an organizer said: "That s exactly when I and the others realized if we could be three, or four times this number we could take down Mubarak."

Amir records that many people in Egypt remember that day as the turning point for the movements that would lead to the Arab Spring protests in 2011 that took Mubarak out of office. The Egyptian organizers he interviewed point to the Feb 15th 2003 global protests as the seeds of their own protest. "All of that spun out of Feb 15th, you can trace the line, you see," says Amir.

Finally, in 2013, as Amir was finishing his film, leaders of both America and England were talking about going to war in Syria. Amir felt as if history were repeating itself and the anti-war protesters were once again in the streets. "That is the wonderful thing about documentaries, you're dealing with living changing things. I realized my film wasn't over as I watched the television, and Parliament voted no on war. What an amazing turnaround. 10 years before they all voted for war, 10 years later they voted against. Nothing like that vote had happened in England in 231 years, for Parliament to go against the wishes of the leadership."

The documentary shows English Prime Minister David Cameron saying: "Parliament, reflecting the will of the British People does not want war, I get it, and will act accordingly." Two weeks later, President Obama said he'd look to Congress for approval for a strike on Syria, but with public pressure so strongly against the war a successful vote was uncertain. It gave the opportunity for Secretary of State John Kerry and Lavrov of Russia to negotiate an agreement to disarm the Syrians using diplomacy, which of course made a vote on war moot. Amir took his camera to Trafalgar Square where the anti-war leadership had a victory rally. 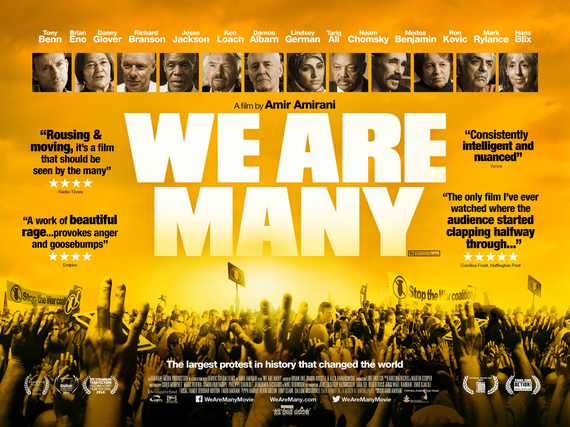 Tony Benn, a revered political figure on the left in England and President of the Stop The War coalition since its inception, spoke to his enthusiastic supporters. "I've been coming here for many years, since the Suez crisis," he says in the documentary. "And mostly we find that we've lost the battle. But what we must remember is that all our actions have led to the result that led to the vote in Parliament last week."

We Are Many is a powerful documentary showing that people do have a voice. It's a document that shows hope that can be found, even in the midst of hopelessness. A film that reminds you that the actions taken today can inform the future in ways you'd never expect. Everyone can have an effect, a positive effect, on the world.

Tony Benn's final comments in the documentary are the ones to take with you. "There are two forces at work always; anger about injustice and optimism that you can make a better world. And the two coming together are a very powerful force."

Powerful indeed, Amirani's documentary shows there can be a shift in the consciousness of the world.

For more on We Are Many:
To contact the film makers with questions email them at: info@wearemany.com