It's never fun to be late to the party, especially a party thrown by the New York City Ballet and Christopher Wheeldon. I missed the premiere of the company's first "All Wheeldon" program, a set of three ballets -- including one new, and one new to New York -- by NYCB's former resident choreographer. (Apparently it was a dramatic night, too: Poor Jennie Somogyi, a lucid, harmonious dancer, injured her Achilles tendon onstage.)

But I was able to see Les Carillons (the premiere) and DGV: Danse à Grande Vitesse (the New York premiere) on separate bills during the week. Even on different nights -- and bracketed by Balanchine and Robbins ballets with big personalities -- the distinct fragrances of these two works were potent. With their large, well-deployed casts, they were clearly made by the same geometric mind; but what a range that mind has.

Carillons, set to Bizet's L'Arlesienne, will take a few viewings to settle in the brain. You leave it remembering a series of feelings, rather than steps. Its five lead couples, mirrored by five supporting pairs, live in an abstract take on the pastoral France of Bizet's score: The girls wear long skirts, the boys poet blouses (or at least, in a tacky twist, one billowy sleeve); there are bits of mazurka steps and lots of hands on hips. Miniature dramas abound. 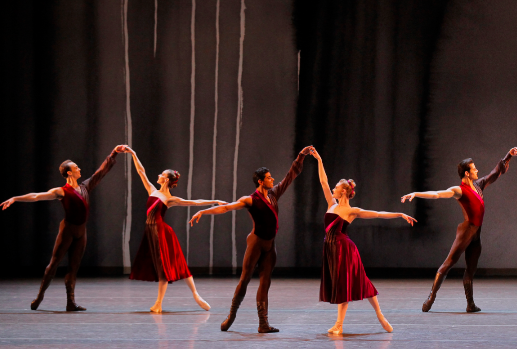 Despite its strong cast of men -- particularly the assured Tyler Angle -- Carillons belongs to the women. And when those women include Sara Mearns, Tiler Peck and Wendy Whelan, how could it not? Wheeldon gives Mearns a gypsy girl solo; she's the siren, dancing at full volume for an appreciative chorus of guys. Peck gets a felicitous little variation that reminds me of a child skipping rocks on a pond. Whelan, Wheeldon's muse from the beginning, has the most affecting moment of all. After her duet with Robert Fairchild, Fairchild leaves. A crowd of happy couples begins rushing past -- the tide coming in. Whelan wades through them alone, moving against the current.

Whelan is the company's senior ballerina. Is this what she feels like now? An island in the sea of NYCB youth?

Carillons is like that; it's about people, and you're always wondering what they're thinking. The only thing the edge-of-your-seat DGV is "about" is momentum. That's not a very insightful thing to say, considering that Michael Nyman's score was written for the inauguration of a line of the French "train à grande vitesse." But even in the music's moments of stillness -- and there is a particularly striking piece of silence about halfway through -- Wheeldon maintains the sense of a building swell.

Corella Ballet danced DGV in New York a few years ago. But that performance lacked the blunt impact the ballet has at NYCB. DGV is a high-speed race in the moonlight, and Balanchine dancers are thoroughbreds. At NYCB, when DGV's 16 corps dancers hurl themselves from one side of the stage to the other in a whirling, breathless canon, you find yourself trying to figure out who came in first.

DGV is Wheeldon at his most slick. But whenever the fire-licked leotards and the industrial-chic set and the Janet Jackson arm isolations get to be a bit much, there's a flash of true magic. When Whelan enters in a huge, sustained overhead lift -- Superman soaring over Metropolis -- it feels like she might really be able to fly.