The rooftop at 810 Humboldt Street in Brooklyn is much different from other buildings; it is home to a 15,000 square-foot hydroponic greenhouse that produces over 100 tons of food per year. The greenhouse, built and operated by New York-based company, Gotham Greens, is supplying year-round ultra-local produce to nearby grocery stores and restaurants.

The greenhouse in Brooklyn epitomizes the rise of a new urban agriculture -- farming that is taking place within cities rather than rural areas. Rooftop greenhouses, backyard farms, and community-managed garden plots are all examples of this growing movement. At my own house in Southern California, we are growing over 5,000 pounds of food per year on a plot of land the size of an NBA basketball court -- enough food to feed my family of four all year.

The local food movement has its roots in a desire to eat honest, non-toxic, nutritious food. The emerging framework of urban agriculture, however, is having as significant of an effect on our economy as it is on our health.

By shifting a share of food production away from the rural areas and into the urban areas themselves, urban farming is changing the food system. Changes in the food system have ripple effects through everything because food is a central part of all human activity. The growth of this new agriculture is reviving and stimulating local economies like never before.

Here are four ways this is happening:

Local food production keeps more dollars circulating within communities. A purchase of food from a national supermarket chain sends money out of the community. In contrast, a dollar spent on local food ends up with a local farmer or business. That farmer might spend the dollar on compost from a nearby facility or tools from a local store. The more the dollar changes hands locally, the more wealth is generated locally.

This is called the local multiplier effect: Money spent at locally-owned businesses stimulates more local economic transactions, which in turn keeps wealth flowing within communities (instead of flowing out).

"We've seen a great degree of growth in the number of startups focused on setting up for-profit urban agriculture operations. These operations take on many forms from rooftop, to hydroponic, to aquaponic farms, but the one thing that they all share in common is that they are driven by an understanding that the profit potential from robust consumer demand for local food is real and here to stay."

Urban farms create new economic value from previous waste streams. It takes energy to grow food. In industrial farming, that energy comes from expensive fossil fuel-based fertilizers and large machinery. On a smaller urban farm, one has to think more creatively. It turns out that the large amount of food waste that results from a high concentration of people living in urban areas can serve as valuable fodder for food production.

For example, Will Allen's organization, Growing Power, is the last functioning farm inside Milwaukee city limits. Allen, who recently won the MacArthur Genius Grant for his work, has designed a system of greenhouses and farm locations around Milwaukee that diverts and composts more than 44 million pounds of food waste per year from nearby households, beer breweries, coffee shops, and even corporations like Walmart. Simultaneously, this system produces one million pounds of organically-grown food each year.

Similarly, at Back to the Roots, an Oakland-based sustainable food company, the flagship product is a grow-at-home mushroom kit that uses recycled plant-based waste to grow gourmet oyster mushrooms.

The practice of farming promotes the development of marketable trades and crafts. Growing food is a deep and intricate science, which often requires skills in carpentry, irrigation, electric work, construction, plumbing, canning, pickling, cooking, animal husbandry, beekeeping, and so forth. These skills could prove useful and profitable in many other spheres of local community economies.

The disruptive, transformational, and positive impact of urban agriculture is only just beginning to be seen. Urban farming is still in its infant stages, but it is growing rapidly because of a confluence of health, environmental, and economic motives.

At my own backyard farm in California, every season I bear witness to the abundant surplus of food we are able to grow using half the amount of water we had been using to maintain a lawn. When I look out onto the urban landscape of manicured green grass, the potential for a buzzing new local food economy seems so obvious. It seems the transformation might already be underway. 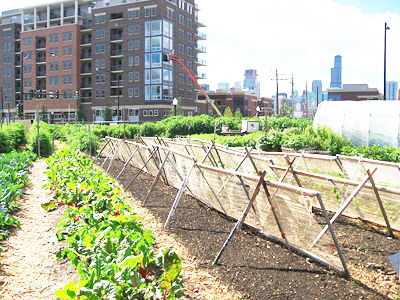