The fifth e-book in the Lesbian Poetry Archive's series of classic lesbian-feminist chapbooks is Oriethyia's Love Song to the Warriors. The facsimile edition of this important chapbook captures thematically the spirit and excitement of feminism during the late 1960s and 1970s. Love Song to the Warriors is a vital artifact of poetry and lesbian-feminism, worthy of greater attention by readers and writers. 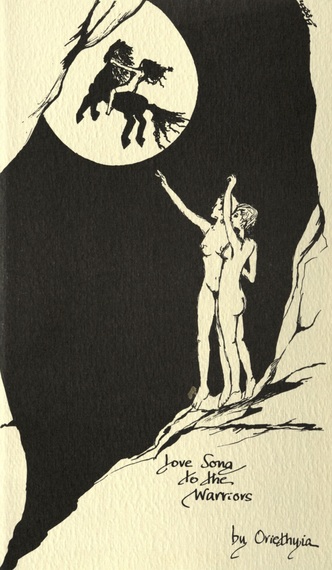 Thematically, the poems of Love Song to the Warriors cover an array of feminist issues, demonstrating the breadth of feminist visions and concerns. Three themes emerge as particularly salient: revolution, mythology, and historical reclamation. Much has been written about mythology and historical reclamation in relationship to feminist poetry (see for example the work of Mary DeShazer, Mary E. Galvan, Judy Grahn, Germaine Greer, Alicia Ostriker and Kim Whitehead). Oriethyia's work confirms the significance of these themes and demonstrates how pervasive they were. Women embraced histories about Amazons and witches as feminist foremothers--and included their imagined world in poetry. They also rewrote contemporary mythology as in "For Super-Hero Fans" where Oriethyia imagines

Wouldn't it be wild
if jill jonston was right,
if Lois Lane was in fact,
a dyke?

Jill Johnston, the Village Voice reporter and author of Lesbian Nation, was widely known as a feminist provocateur. Here she is linked with Lois Lane creating a new type of mythological fandom for lesbian writers.
What electrified me about Love Song to the Warriors the first time I read it was how immediate revolution is in these poems. The third poem, "On the Eve of the Official Bicentennial, and in Honor of the Third Amerikan Revolution," includes the line, "If there is to be a revolution, / let it begin here." The conditional if seems a hollow gesture to skeptics even this early in the text. The title offers the framework that the speaker is in fact in the midst of a third Amerikan revolution -- feminism. The poem concludes:

It has begun.
The first fires have been lit.

And in this camp,
You were the spark.

Later in Love Song to the Warriors, in the poem "Passing in the Patriarchy, Oriethyia writes,

if every belly dancer
was a revolutionary,
every hooker,
the revolution would be over
tomorrow.

This passage affirms both the immediacy and viability of revolution and the type of organizing necessary to facilitate it.
In "Compromise," the poet affirms a vision for a different kind of revolution.

I want to wake up tomorrow
to the news that the
revolution is over,
quiet, bloodless, and over.

Feminists reworked traditional ideas about revolution in their theoretical and creative productions. Oriethyia follows this powerful quatrain with these two lines: "We won't be divided / ever again." While feminists critique the vision of a unified sisterhood, both concurrent to its promotion and in its afterlife, the sisterhood vision offered here is striking in its power and hopefulness. For me, lesbian-feminist critical thinking must honor both the critique and the appeal of the vision of sisterhood.
The reimagining of women and revolution is also evident in the poem, "To Hanah Senesh, Angela Davis, Pat Swinton, Susan Saxe, Kathy Power, Assata Shakur, Joan of Arc, The Witches, Bodicea, Oreithyia, and Every Pre-Revolutionary Chinese Mother who Refused to Have Her Daughters Feet Bound." Through the concatenation of multiple women who defied societal conventions, this poem invokes women's power in spine-tingling ways in the final tercet.

Similarly, in "Song to a Celtic Warrior," Oriethyia writes:

The possibility of immediate revolution inspired feminists and lesbians to imagine a bold new world and work to create that world, free from oppression. Reading these poems today reminds me of the passion and excitement of feminism and lesbian-feminism in the 1970s. Revolution was at hand. What if we lived with such fervor today?

The e-book of Love Songs to the Warriors, including more information about Oriethyia, is available at the Lesbian Poetry Archive.