I am here in Park City, Utah, for my first encounter with the Sundance Festival; I had expected starlets in ski boots and parties in which people said 'Darling' and perhaps many worthy little films with artistic merit, but -- my mistake, probably due to the grudging reluctance on the part of print journalists like myself to yield respect to a medium that seems to get all the glamor and sometimes go an inch deep -- I had not expected subversion, analysis or, even, revolutionary ideas.

But thirty-six hours into Sundance at the time of this writing, I have to say: we seem at one of the few nexuses left in the US for brave journalistic critical thinking. Sundance this year is packed with substance, and documentarians especially are tacking head-on issue that US print journalists, especially those who work for corporate-owned media, have abashedly refused to tackle. The two main themes in the festival -- to my amazement, given that the mainstream pop-culture world seems to have dismissed feminism and closed its eyes to threats to freedom -- seem to be gender rebellion -- and civil liberties. 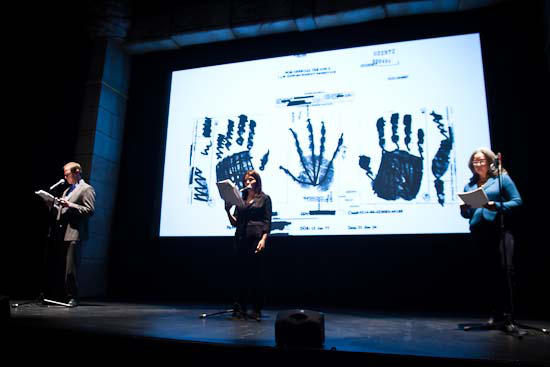 I am here as part of an event put together by PEN -- the organization that defends writers' freedom of expression -- and the ACLU: on Saturday we staged 'Reckoning with Torture', an ensemble piece based on real documents related to US torture that the ACLU acquired through a Freedom of Information Act request. The parts were read by a lineup of writers and film actors, including Sandra Cisneros, Annie Proulx, and America Ferrera. A former US military interrogator and former CIA agent, Jack Rice, read with us as well. The piece was directed by Doug Liman (The Bourne Identity, Fair Game). I am pleased to say I read the part of George Bush. 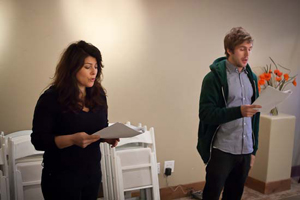 We arrived in the charming former mining town, which is set among high, rounded, snow-dusted hills; a white-blue sun blazes down on energized crowds of tourists, filmmakers and huge gaggles of ecstatic young film students ranging from Japan to the American Midwest. The vibe was much more down-to-earth than I had expected, for the most part, as we board free shuttles from theatre to theatre, ushered around the small town by upbeat locals who seem very proud of their community and their festival. Nonetheless a wave of tension undergirds it all, as so many careers of young hopefuls will be made -- or not made here, and so many films either take off or never find an audience.

Our first night here, Wednesday, we made it to a screening of the much-buzzed about indie horror-comedy genre piece, The Woman. This terrifying film, about a woman living in the wild who is captured and imprisoned by a stern paterfamilias, locked in a root cellar and raped, becomes a violent rape revenge story. It has generated buzz online because of a screaming confrontation between viewers at an early screening, about the issue of how rape is portrayed. I had met the tiny, friendly, very young, strong-looking lead actress at a cocktail party the day before; she was interested, she said, in a career doing stunts. When we passed a group of undercover cops at the screening who were all dressed as working-class locals -- all wearing baseball caps and single earrings, and neatly goatee'd; there had been a state attorney general complaint about minors seeing the nudity in this violent film.

I made it into the theatre for thirty seconds: there, fifty-foot high, was my tiny young friend from the night before -- but covered in mud, hair tangled, and blood pouring form a wound in her side; the creepiness of the image and the music, and the knowledge of what the story line would be, were too much; I had to leave the theatre. But even though I was too much of a wimp to sit through it, I noted that this theme, of the gender tables being turned, was cropping up in many places in the festival. At one of the welcome cocktail parties I had met Ellen Barkin, who had just produced and starred in the much-anticipated Another Happy Day, written and directed by new discovery, 25-year-old Sam Levinson; it centers on a dysfunctional household of two generations of women, and Barkin was witty and scathing about how delighted she was to find such a good script with four parts for women over forty, as she skewered the refusal of Hollywood decisionmakers to understand what a longing there is in female audiences for films that portray older actresses in a range of complex roles. And 'Miss Representation' directed by Jennifer Siebel Newman, is a long-overdue look at how media objectification of women is internalized by young girls. Real, classic -- that is, unapologetic -- feminism is back, at least at Sundance.

Civil rights also crowd the roster of the most talked-about movies. Thursday morning, Amy Goodman of Democracy Now! was broadcasting in our hotel's restaurant: Egypt was erupting in riots, and one of her sources, who was connected to a well-known activist there, had sent word that the whole country would be up in arms, whatever the cost, by the following day. (Indeed by Friday that prediction had come true -- and the Mubarak regime had reacted by closing down the internet and all outside sources of news; Egypt would go dark). Later that day, we attended a provocative panel discussion between Goodman, David Carr, media critic at the New York Times, documentarian Eugene Jarecki (Reagan) and Stephen Engelberg of Pro Publica. WikiLeaks was the hot center of the discussion, and there were tense moments as panel members were confronted by the audiences' resistance to the notion -- presented by Bill Keller the day before, in a shameful essay -- that Assange is somehow not engaged in journalism, and that the New York Times publishing the Pentagon Papers -- or the 2005 SWIFT banking story -- is in some magical way 'different' than what Wikileaks has done.

Then on to one of the great documentaries of the moment: Hot Coffee, directed by attorney Susan Saladoff in her first film effort. This tracks the issue of 'tort reform' (the left has yet to come up with a soundbite to counter this right-wing phrasing of the issue) and, incredibly, makes vivid the story of how corporate America used the (much-distorted) story of 'the woman who spilled McDonald's coffee in her lap and sued for millions' to show how big business is propagandizing us all -- and buying out the state judiciary, at Karl Rove's direction -- to gut a consumer's right to seek accountability in the courts. Two other important documentaries center on activism: If a Tree Falls tells the story of the FBI infiltrating the Earth Liberation Front, and 'turning' the members to betray one another. And We Were Here tells the story of the Stonewall riots, which ushered in the latest wave of the gay liberation movement. The showing of Front Page, which is a love letter to the New York Times and reveals the way economic pressures are gutting traditional journalism -- showing vividly what a cost to democracy will result from nothing taking the place of serious reporting -- was yet another tribute to what seems like a grassroots cultural recognition of the importance of threatened freedoms: the integrity of civil law, of the right to assemble, and of the First Amendment.

Later that night, at a party with hip-hop music, director Kevin McCarthy (Last King of Scotland) was jumping up and down, a look of serenity on his face. He had just screened 'A Life in the Day', a well-received and very beautiful project in which YouTube invited people from all over the world to send in video of their daily lives, all on one day, July 24, 2010. 80,000 submissions resulted. The images, which flickered on a screen above young people making music-video moves and older people schmoozing, were so unexpectedly moving that I kept blinking back tears. Here was the life of a seven-year-old shoeshine boy in some Latin American city; here was a mom with cancer caressing the face of her child in what looked like a Brooklyn bedroom; here was a Japanese single dad preparing his little boy's lunch. Suddenly one had a sense of the power of film to really make the world a single family; adding together all we had seen in two days -- and getting ready for our own event on Saturday, for which our scripts bore hand prints from prisoners who had died in US custody -- it seemed from this Sundance, anyway, that ours was a global family that longed for equality -- and longed to be free.