Now that Lady Gaga has announced the birth of the new post-patriarchal female archetype by her 2011 Grammy performance busting out of a semi-transparent egg, where she claims to have incubated for 72 hours... 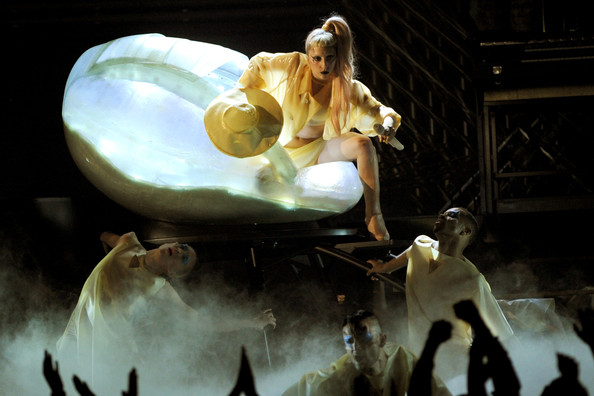 ... my job as cultural critic suddenly became much easier.

Even so, I wasn't taking any chances. So I spent two months preparing for "Eros(ion) Flow at the Gershwin Hotel" after host Neke Carson and Michael Wiener invited me to present during their Tuesday evening series. 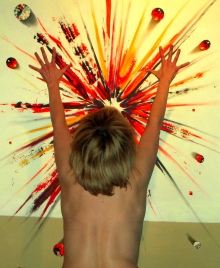 The date was February 1, the eve of the New Moon in Aquarius commencing the Chinese New Year of the Rabbit and also the Feast Day of St. Brigid and Candlemas. I invited three outstanding male NY poets to perform and two female Kundalini performers. John Knowles, a.k.a. Panman performed his magick Video Alchemy VJ and the idea was to ignite the kundalini and raise it through the chakras.

The performance began at 7:15 PM, with Dianne Bowen cutting the silver and gold chord representing the conjunctio of the Solar eclipse of the Sun and the Moon. I had been braiding the opposites together all afternoon... 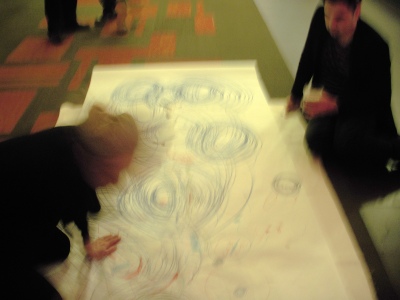 Dianne Bowen's performance of "Drawing Down the Zeitgeist": Photo by Lisa Paul Streitfeld

Her two-layer painting was placed before the red velvet curtains at the portal of the magnificent Gershwin Hotel lobby. 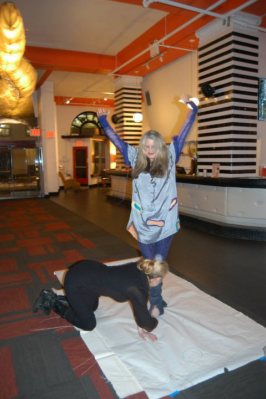 Dianne Bowen Drawing Down the Zeitgeist: Photo by Nikki Johnson

At 8 PM, I began by dedicating the evening to Aldo Tambellini, the artist dedicated to visualizing dark energy in form and Vera Rubin, the astronomer who discovered dark energy.

And then, the alchemy commenced with the kundalini fire... 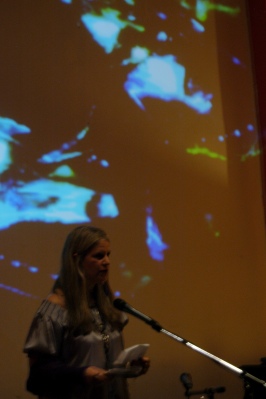 write the poem
when earth's daily rotation
revolves in revolution

burn the poem
set on fire a constellation 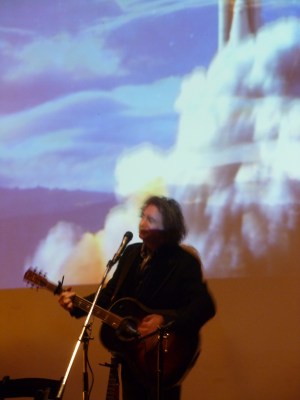 You see the world in a new light
Prove yourself right
When the stars align.

--James Maddock
"When the Stars Align"

Serpent awakened, it snaked through the eros(ion) flow of masculine and feminine polarities... 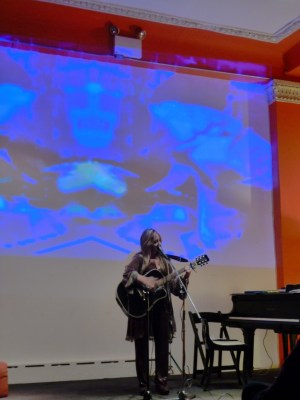 SK Lover lulled us into the dissolving of ego... Photo by Nikki Johnson


Jeffrey Wright brought us firmly back to earth with his ribald poetry, which culminated in the heart... 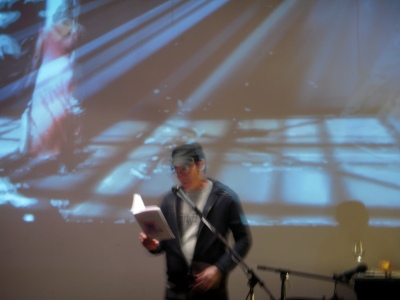 Drunk on the Vomit of Angels

Name your poison -- rattlesnake graffiti
whips through my veins -- a lexicon
of ladders -- a highway of scars.
I saw you dancing with the stars,
your lips on fire with desire,
a noose of pearls around our future.
We all shine on, like the wind
coated with whispers and asking
when you'd be free, alone with me.
Nicotine. Gin. I drink the night
like a freight train of wishes
and kiss the air with an empty stare.
And every day I write the book of love,
each page filled with fallout from above.

Edwin Torres, barefoot, transcended through his alchemical transmutation of the opposites in his new chapbook YesThing NoThing, demonstrating, once and for all, that he is the authentic heir to Tambellini, the poet as a shamanic wordsmith transversing between worlds to propel humanity into the future through the image... 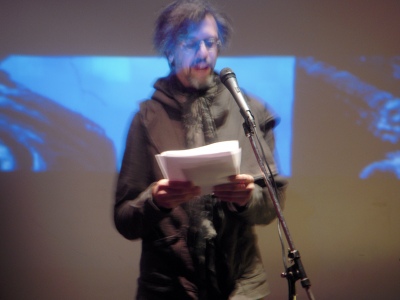 I am the guest of a prince. I stay at his palace and share my room with two other talents. The three of us are unique and in demand. We are each 10 stories tall. We do what we do and no one else does. Our limbs are a hike, folding path over glory. I awake one morning and look out the window. An ocean has appeared. It's surface, 10 stories high above me, the sun just arriving. A reef reaching towards me through clear, blue water crystallized by morning's shimmer. A surface broken by shadows, underneath what appear to be cliffs. The ocean bottom, as deep as I am from the surface, 10 stories below. I am 10 stories above. 10 is where we meet. I look down. A horse is swimming into view. It's main whipped by morning wind-water. The rider is a tourist on an underwater swimming tour, where the horse does all the swimming. I turn my head and see more enter the frame. 10 more. 10 signifying more than height, horse or story. Against the blue green water, the ocean bottom is visible. Horse and rider float. 10 stories above me. In slow motion, sounds like. But that is because storyteller remains in the story. They swim away. The water clears as if almost to disappear. My eyes adjust and see 10 surfer punks relaxing at the bottom of the ocean. They wear cut-off jeans and shorts. Some have t-shirts; some don't. They are relaxing in chaise lounges on the bottom of the floor, getting suntans through the crystal clear water. Every five seconds, one of them swims up to surface for a gulp of air and swims back down. The scene is a constant yo-yoing of bodies going up and down. Swimming with hands to the sides, long hair flowing behind, air bubbles tracing their destination. Up and down. Up and down. A hypnosis of breath and water. A reward at bottom and at top. A kind of water that lets this happen. A kind of animal doing what no one else can.


After Torres transformed into the conjunctio, or hieros gamos, through his alchemical wordplay, Louisa Bradshaw took the stage with her pianist/composer Gregory Nissen, and transformed from torch singer ("That Old Black Magic") 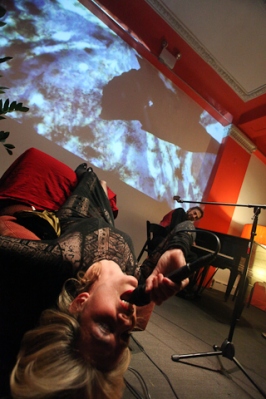 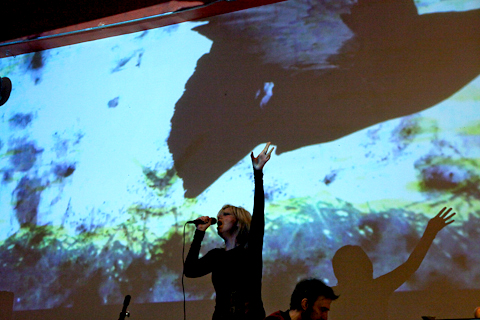 Which brought us full circle (r)evolution...

take a slice
from this nourishing
bread

food for the soul not for
competition 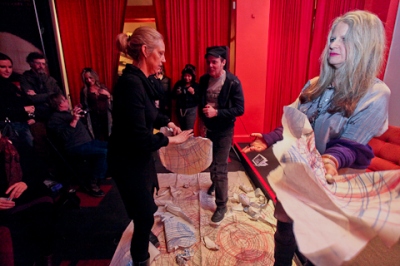