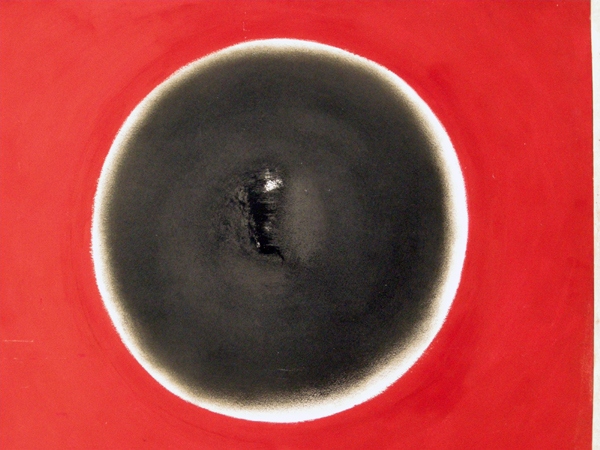 Art generally anticipates scientific revisions of reality. Even after these revisions have been expressed in scholarly physics journals, artists continue to create images that are consonant with these insights. Yet, a biographical search of the artists' letters, comments, and conversations reveals that they were almost never aware of how their works could be interpreted in the light of new scientific insights into the nature of reality...artists have continued to work in splendid isolation bringing forth symbols that have helped the rest of us grasp the meaning of the concepts that even they, the artists, may not have formulated intellectually.
-- Leonard Shlain, Art & Physics: Parallel Visions in Space, Time & Light, p. 24-5 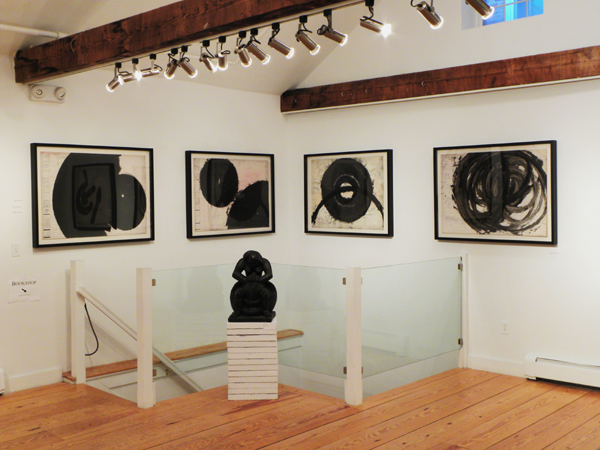 Aldo Tambellini's mini-retrospective Black IS until the end of December at Pierre Menard Gallery in Cambridge. Photo credit: Simon Spiller

The anticipated resurrection of the original multimedia artist, Aldo Tambellini, who pioneered the avant-garde collapsing of boundaries between poetry, painting, sculpture, film and television in the early 1960s... 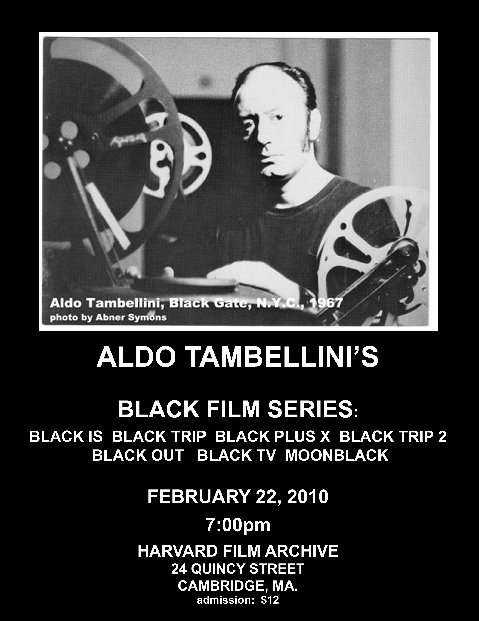 ...reveals just how accurate is the thesis of Leonard Shlain's groundbreaking book, originally published in 1991. Art & Physics was both inspiration and guide for my formulating a new art theory surrounding the emergence of a new archetype predicted by C.G. Jung, father of modern psychology and Wolfgang Pauli, father of modern science. 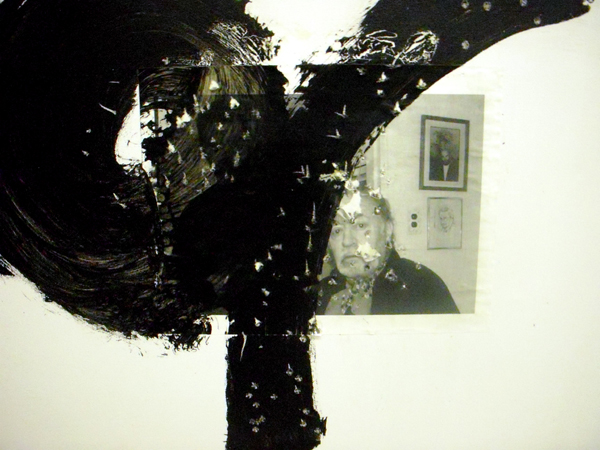 While general interest in physics has waned due to the failure of finding the theory of everything, the "splendid isolation" of Aldo Tambellini has indeed produced the symbol for a new model of physics that has been, like the artist, repressed by the establishment. 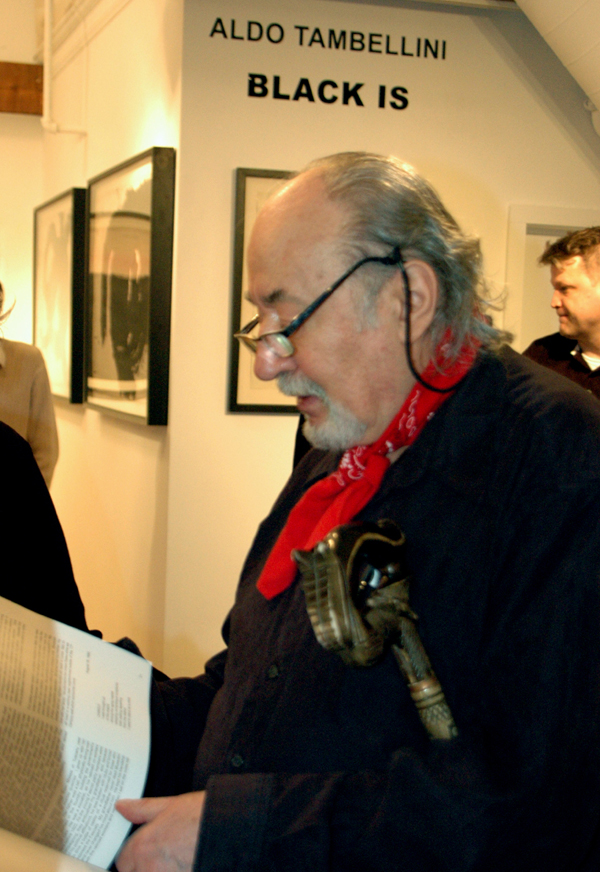 Aldo Tambellini at the October 15 opening of his premiere exhibition, Black IS at Pierre Menard Gallery in Cambridge, across the street from Harvard, where his film retrospective was presented last spring. Photo credit: Cindy Snodgrass

The hyperdimensional model was developed by Russian scientists in the 20th century. It entered the west with the fall of the U.S.S.R. in 1989, the year that Tambellini resolved the space/time dilemma of an ascending paradigm by fulfilling his personal/universal narrative of the circle.

Like Bohr, Jung repudiated the conventional doctrine of causality. He proposed that all human events interweave on a plane to which we are not consciously privy, so that in addition to prosaic cause and effect, humans events are joined in a higher dimension by meanings. The principles of synchronicity and complementarity, bridging as they do the very separate domains of the psyche and physical world, apply as well to the connection between art and physics. The German language encapsulates the idea in the word zeitgeist, which unfortunately has no single word equivalent in English, but means "spirit of the times." When discoveries in unrelated fields begin to appear at the same time, as if they are connected, but the thread that connects them is clearly not casual, then commentators resort to proclaiming the presence of a zeitgeist. (Shlain, Art & Physics, p. 24)

In fact, Shlain's thesis has proved accurate on this point of Steam Engine Time as well. In one of the more pressing synchronicities on my journey to applying the Heisenberg Uncertainty Principle to uncovering a new art movement, I was handed the key that connected the resurrection of Tambellini to a potential "theory of everything."

My friend and collaborator, Rolf Mauer, handed me Dark Mission: A Secret History of NASA co-authored by Mike Bara and the controversial Richard C. Hoagland, chief proponent of the hyperdimensional model. Book in hand, I left for Salem to visit Aldo's atelier. As I arrived, the artist's work was being hung, and I remained there for five days alone, immersed in his vortexes while reading about this model of hyperdimensional physics and Torsion Field Theory, the most fundamental rule being "rotation, rotation, rotation." (Dark Mission,p. 58) 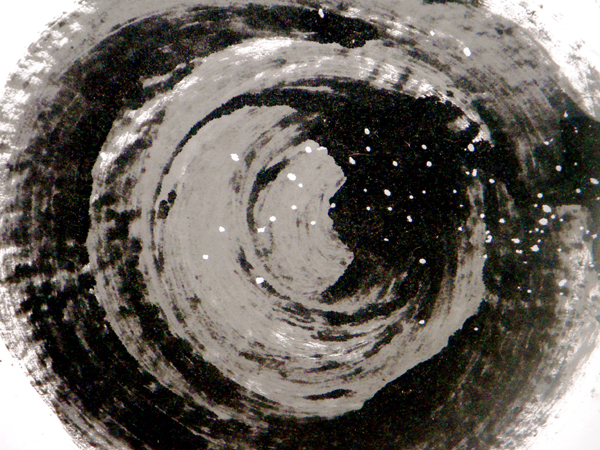 This brought me to an understanding of how Tambellini, renegade in the shadow of the slick surfaces of pop, was actually pioneering a holistic vocabulary from a universal galactic form, the circle.

All too often, when reading about the work of exceptional artists, we are told about the past styles that influenced their work. Their pedigrees are traced backward to former artists, and rarely is their work explained in terms of how they anticipated the future. (Shlain, Art & Physics, p. 19)

True again. Tambellini's multimedia penetration into the circle, and the gestural rotation, could not be analyzed or interpreted in the traditional manner of art criticism, and this was all too obvious from his very choice of materials. 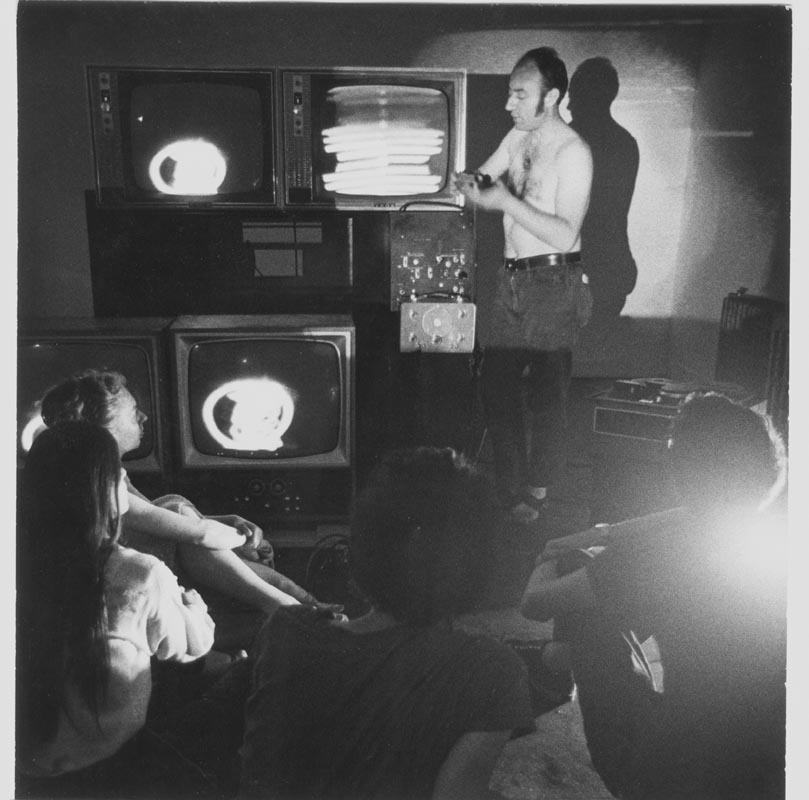 He was working with the new medium of television and there was no precedent for art in this realm where the renegade electron was being channeled and mastered by the artist as a personal narrative of a collective medium of expression, thereby appropriating for the individual what was to become a corporate controlled monopoly of the public airwaves.

By immersing myself in Tambellini's art, I understood that the only effective approach to analyzing the art of a new paradigm is through the lens of a new paradigm, meaning from the future backward to arrive at the present moment, in which past, present and future converge as an ever-evolving NOW.

How do we arrive at this future state where we can interpret the art of the Now? This was the struggle that Tambellini presented to me when he declared that I discovered him that fated day in the summer of 2009 when I entered Pierre Menard Gallery for a meeting with proprietor John Wronoski and was riveted by both the man and his art.

My catalog essay for Black Is, Tambellini's mini retrospective exhibition at Pierre Menard Gallery is entitled "Aldo Tambellini's Art of the Now: A Futurological Approach." In this essay, I characterized the tenents of a new paradigm in art through the ouevre of this undiscovered genius: from his Intermedia collaborations to his intense exploration of the circle through the physical gesture of rotation. The individual characteristics of an ever-evolving art of a new paradigm are: the unifying symbol; proactivity; dynamic presence; transcendence; uncertainty; and collaboration.

Art and physics, like wave and particle, are an integrated duality: they are simply two different but complementary facets of a single description of the world. Integrating art and physics will kindle a more synthesized awareness which begins in wonder and ends with wisdom. (Shlain, Art & Physics, p. 24) 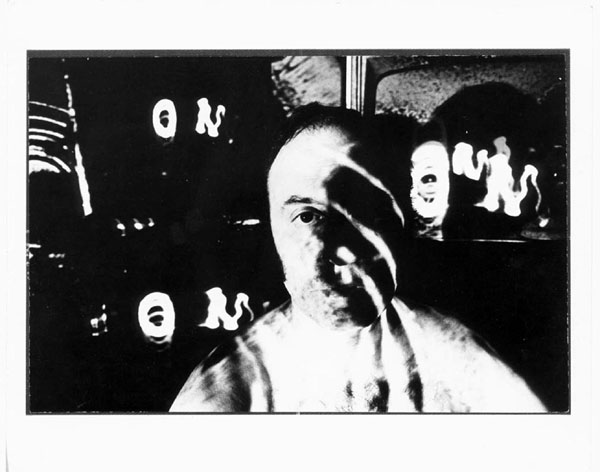 And this sums up my experience with Aldo Tambellini, which true to the zeitgeist, began with his resurrection of Black Zero in his old neighborhood on the Lower East Side. 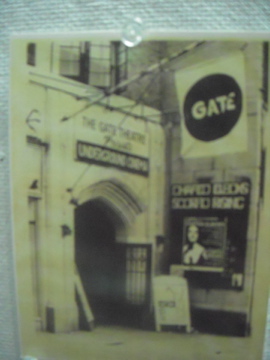 The event took place just after I returned from delivering my paper "Applying the Heisenberg Uncertainty Principle to 21st Century Art," at the XLIII AICA Conference in Dublin. This event catalyzed a year-long quest to develop an observer/participant art form reflecting the integration of time (particle) and space (wave) into the living breathing presence of a new archetype, the "wavicle" reflecting Tambellini's space/time experiments in art & physics at MIT, anticipating the hyperdimensional model based on the torsion effect of the rotation of the planets and their satellites arising from behind the Iron Curtain.

It is incredible to think back, from this future position, to how a potential "theory of everything" might have brought that curtain down sooner, had the west been ready to accept it. Even now, it is being repressed. 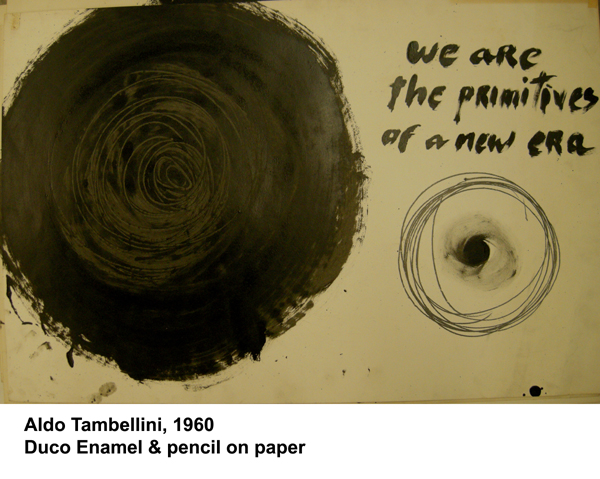 Clearly, the time for revelation has come. So, what are we waiting for?

Photo Credit for Black on White and Red and We are the Primitives: Anthony Pira