ART GIRLS opens 10 ACHTUNG BERLIN at the Babylon Kino in the Mitte of the post-unification art scene. 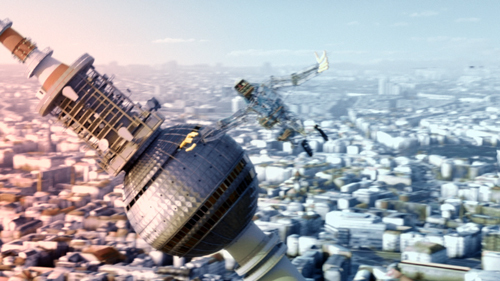 Billed as a romantic science fiction film genre-hopping into satire, ART GIRLS amounts to a full scale invasion trumpeting the emergence of new archetypes along with brave symbols of German/global integration: here the collapse of the beloved GDR remnant, the 1970s Sputnik style TV Tower. 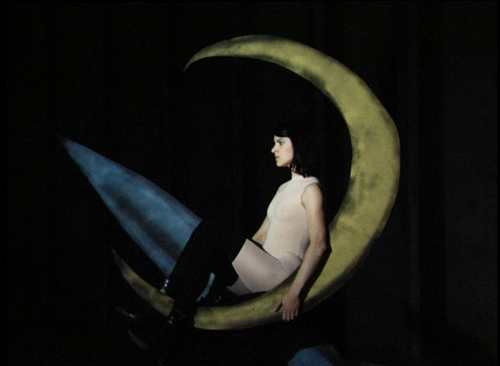 The Thomas Pynchon inspired Prüfstand VII applying the Avital Ronell and Laurence Rickels provocative (r)evolution of Kulturindustrie theory into a new cinematic invention: the documentarian deconstruction of the archeology of the rocket via a female "interventionist" Bianca (Inga Busch) modeled on Inanna, the ancient Sumerian Love Goddess. 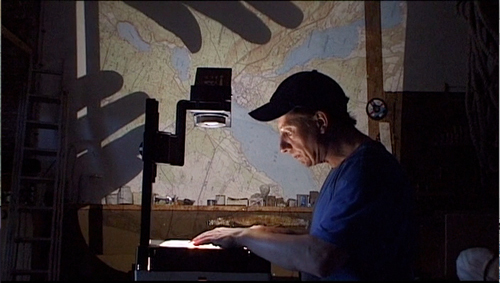 www.enk100.net: where geography becomes destiny. Enki (Steffen Scheumann) superimposing the geography of the UNESCO biosphere Spree delta south of Berlin with the Tigris-Euphrates delta of ancient Sumer, the original E-din.

"Do you know what they called a blow job in Sumer?" asks the beautiful nurse. "Penis kiss."

ART GIRLS is chock full of such gems, including earthworms (!), referencing the rebirth of an ancient archetype. As with Sumer, the authenticity of the icon originates at the source.

Integrating the opposites in the former DDR: Filmmaker Robert Bramkamp and the multi-media artist Susanne Weirich, in their Prenzlauer Berg neighborhood cafe, have evolved their enduring partnership into a new global vision merging art, science and life with their genre-busting film fantasy. (Photo by LPS) 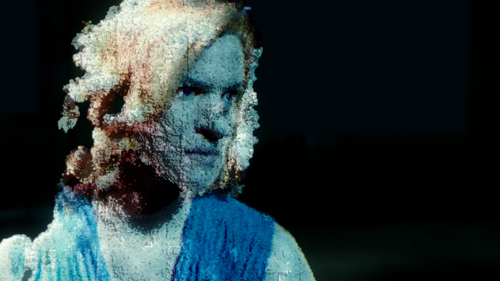 Plowing the new fertile field of the androgynous Aquarian archetype: Nikita Neufeld (Inga Busch) as a biodigital hybrid, past and future... 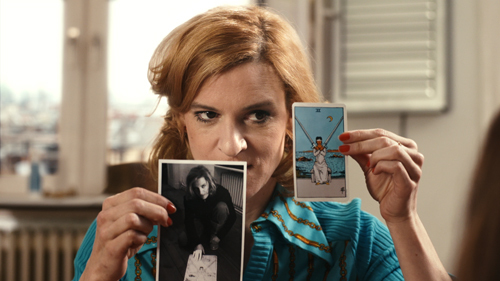 ...poised at the crossroads reflected by the first of seven (the magical number!) tarot card "interventions" of "The Fortunetellingmachine" an interactive slide and sound installation which premiered in Haus der Kunst (2001)... 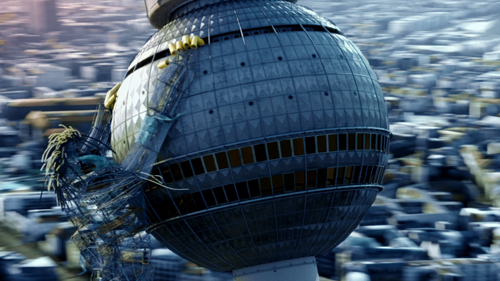 The King Kong phantom motif of Nikita's nemesis, Uma Queen (Megan Gay), is a metaphor for the unbridled greed in the art world. 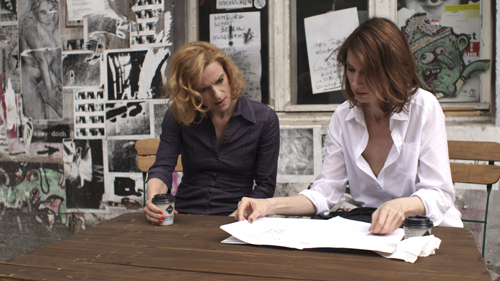 ART GIRLS sifting through the sands of time: the German actress Inga Busch as Nikita Neufeld and the American actress Megan Gay as Uma Queen masterminding their assault on the post-unification Berlin art scene.

Even as it creates a fantastical story bringing art into everyday life via a quantum human evolutionary leap, ART GIRLS memorializes the vast raw urban spaces that made Berlin the destination for artists the world over. 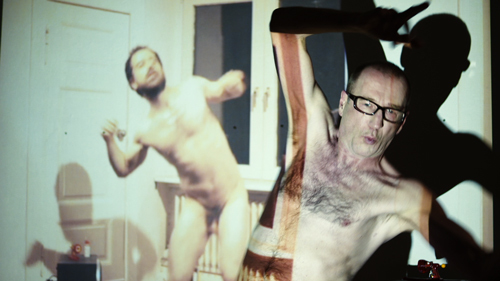 Male Erected: Peter Lohmeyer (Peter Maturana/Laurens Maturana) as the mad genius twin "cured" from the dangerous fallout of his experiment by a "sex and art" collaboration with Nikita initiated in a live video contract implicating the audience as co-conspirators.

The word for "art" in German is "Kunst." This harsh sounding word drums a percussion vibration into ART GIRLS and presents a bold new dialectic for academics to ponder: could it be possible that KUNST, the modernistic goal projected out of German idealism is derived from KUNDALINI, the mysterious invisible power that drives genius? 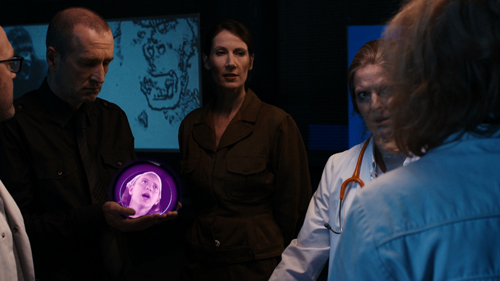 The underlying quest takes narrative form with two mature female artists racing against the body clock to risk everything in a collaboration with the opposites, in the form of a pair of twins operating a shady biotech company seeking the elixir of life which turns their attention from the test tube to art.

By anchoring this excavation in such an ingeniously innovative, yet humorously entertaining weave of German thought within a genre-free narrative, ART GIRLS is clearly a global cultural signpost for the art of the 21st century.

Bolstering the authenticity of ART GIRLS genre shifting is the connecting thread of the visionary artworks of the film's co-producer, multimedia artist Susanne Weirich. Blending multiple mediums, her forms marry mysticism and realism into artifacts transmitting how very precarious was the journey for women to overcome the tension of opposites in order to transcend into a holistic feminine archetype... 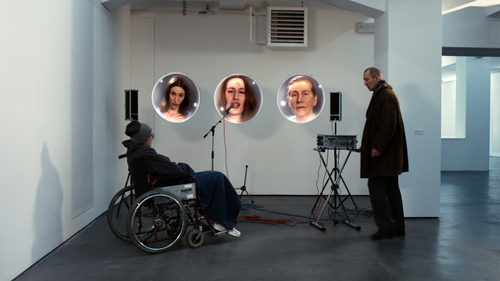 The essential THIRD element enters the narrative after Nikita connects with the "collective narrators" who inform her that she is the vessel for the "New Nature." Thus, the brave leap that Nikita makes is both personal and universal, delivering the Aquarian icon into the collective consciousness by way of its very container: ART GIRLS. 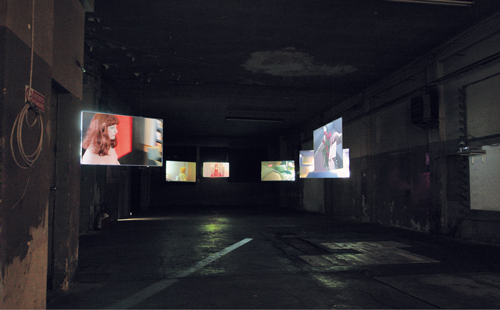 ...made symbolic here with the toppling of the beloved Berlin landmark... 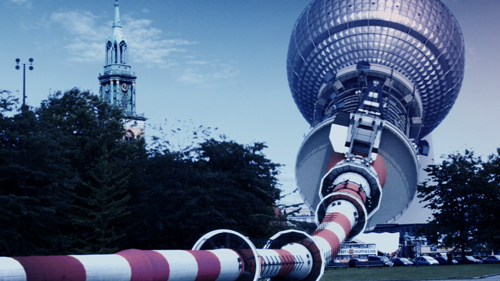 ...establishing a new threshold for interactive art that - incredibly for a feature film - actually drives a (r)evolutionary narrative. 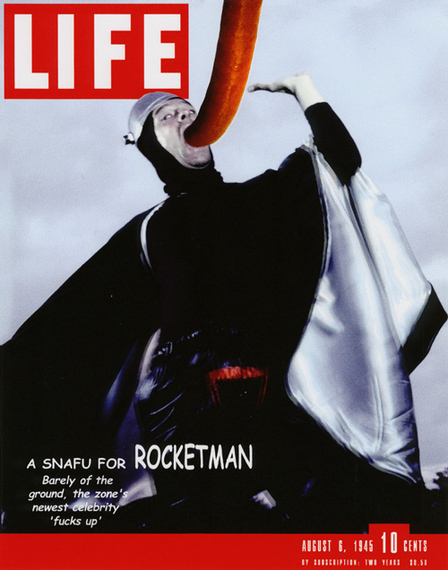 Lisa Paul Streitfeld is a cultural critic/philosopher whose three decade search for the newly constellating Aquarian archetype has landed her in Berlin in perfect timing with the ART GIRLS (R)evolution.