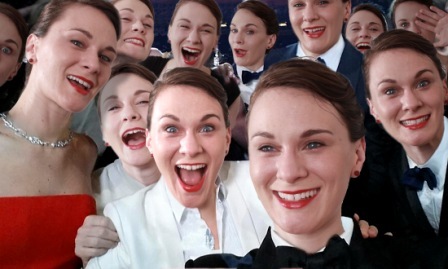 "You don't create fame. Fame creates you.
But do you have what it takes? The trick. The secret. The rule book.
USA bred writer-director, Catherine Duquette, has the secret."
--advance publicity for "Celebrity Bound" at the new English Theatre Berlin.

The double message reverberating through Catherine Duquette's aptly titled Celebrity Bound is where her one-person multimedia show at Daniel Brunet's resurrection of English Theatre Berlin gets its impact.

Catherine Duquette in "Celebrity Bound" at the English Theatre Berlin, proving that what is missing from the botox-injection lookalike celebrity right now is authentic feminine expression. (Photo by Alexander Coggin).

The brilliance of her vehicle is that this consciousness comes from the body. Woven into her one-woman ensemble of characters is a one-woman chorus consisting of a drumroll of perfectly-realized celebrity poses. This rhythm of shifting limbs to a chilling flashbulb beat is an enthralling performance of how the quest for celebrity binds the human soul into a posterity freeze through the artificial light of the electrically-generated image. 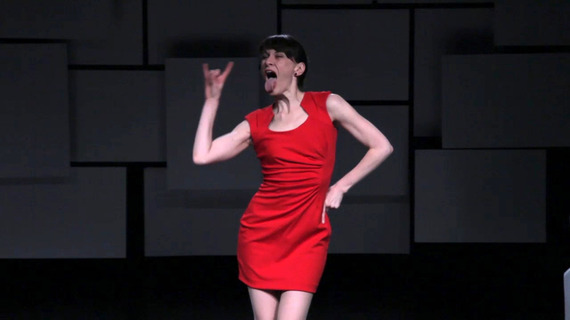 That these poses are adapted from real-life celebrities reveals what a diligent and profoundly aware study the performer makes of a superficial subject loaded with personal and cultural baggage. (Photo by Dian Zagorchinov).

The artistic goal that Duquette reveals as the human condition: converting the tension of opposites through balance... 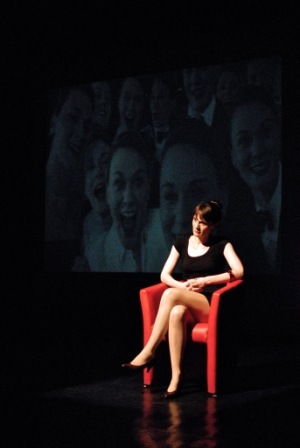 ...demonstrated through authentically engaging audience interaction as an honoring of Self and reflection in Other. (Photo by Ilya-Noé).

Paradoxically, the potential of this grounded leap into 3.0 quantum conversion is a handicap in today's ego-driven celebrity Web 2.0 atmosphere. The corporate-dominated celebrity-obsessed 24/7 media utilizes the fame game for the consumption-driven Kulture Industrie to churn out easily digestible product. 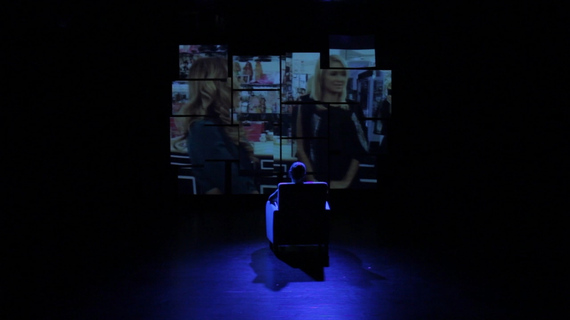 The performer, back to the audience, clicks back to the early sixties rise of the Beatles by means of the new medium of TV and rides the wave through the crash of such superstars as Amy Winehouse and Heath Ledger. (Photo by Dian Zagorchinov).

Duquette unabashedly and disarmingly invites her audience into a goal as noble as it is sincere--to be celebrated for her invention of personally interactive art for(u)ms, such as A Date with Catherine Duquette, examining social issues. The audience clearly roots for her, just as she roots their proactive participation in this 3.0 leap... 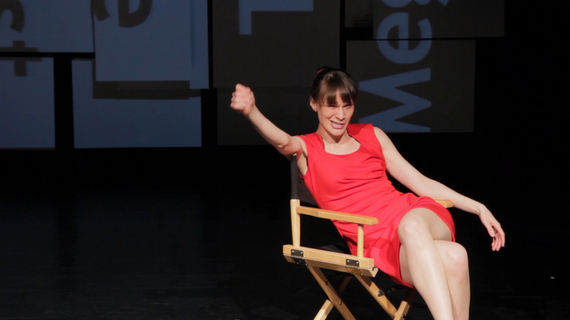 Rooting for oneself before the reflection of Other: The performer invites members of the audience to join her on stage where they can enact their celebrity fantasy to her cheerleading the audience. (Photo by Dian Zagorchinov).

Yet, it is in this feminine consideration for Other--which happens to be the very source of her ability to make the rare interpersonal contact, one on one, in a crowd--that is the genesis of Celebrity Bound, and its genius. 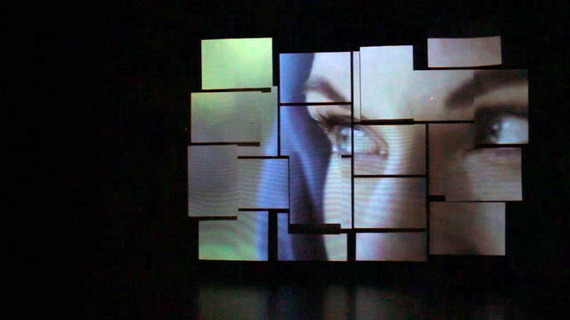 The aspirant reveals, from just about every angle, how she clearly has what it takes to be famous in the 21st century: beauty, brilliance, sheer hard work and, most crucially, the guts to take a risk into Uncertainty with her collaborators, which include her audiences. 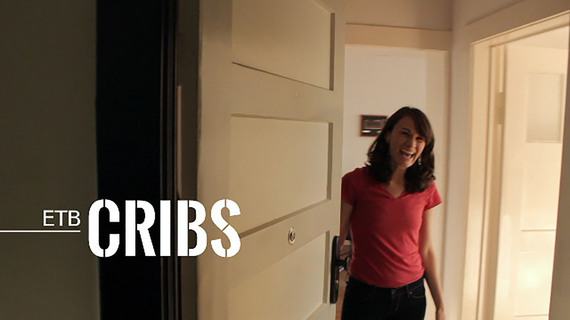 ...The requisite sense of humor about herself is evident as she plays out the secrets to becoming a celebrity, including the exposing one's private life in a meta celebrity video. (Still from video by Joseph Campbell). 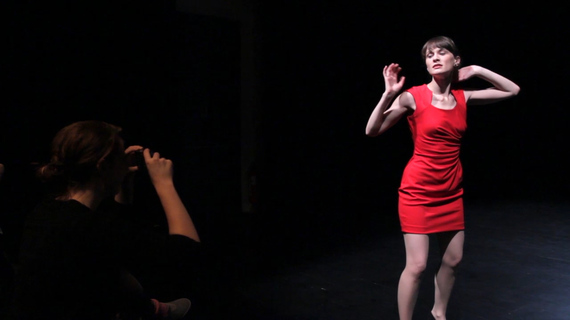 Duquette's agile body instrument depicts the challenge of remaining fluid and present, while striking an iconic pose for posterity. (Photo by Dian Zagorchinov).

Yet, as the show progresses, the struggle culminates to embody the 21st century icon projected by the mass media... 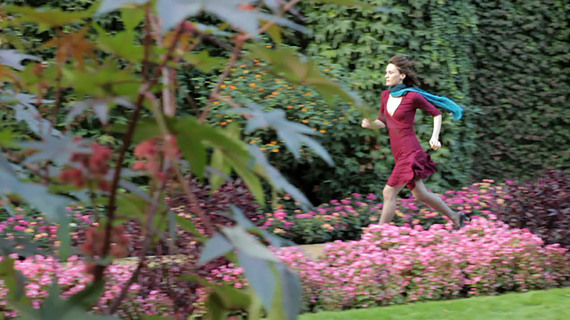 The artist intervenes into her meta celebrity video by asking the viewer if they ever tried to run in stilettos, the very symbol of mainstream media binding of the feminine, while claiming she is attempting channel Cate Blanchett. (Still from video by Joseph Campbell.)

"Is it privilege?" she asks her audience and reveals the making of her own character quest in a poignant sketch about her family's deferred dreams driving her to break through her inherited pattern of failure to meet one's aspirations. This disarmingly naive self-characterization culminates with a viscerally-charged sketch of the dance with the Fame Devil. In revealing the schizophrenia that comes from trying to please Other over Self, Duquette delivers a full-body awareness of the self-binding as the flip side of the obsessive quest for public recognition.

The moment of the 3.0 conversion takes place through what today has become verifiable inner struggle of opposites externalized in the culture by the mythological sacrifice of the struggling artist to the fame god, who determines the rise and fall of what is trending in the culture... 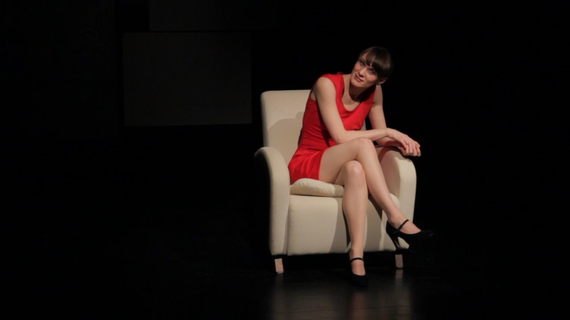 ...It happens inside the alchemical alembic of a white armchair in a simulated talk show, in which Duquette flips back and forth between Lady Gaga, as her own self-created Fame Monster gushing excessively about Marina Abramovic as "the beyond" and the Serbian artist's insistence on creation through stillness. It is here, combining the opposites of artist/celebrity through corporeal stillness/movement within the frame of a talk show-designated armchair, that Duquette enters the universal through her personalized art for(u)m. (Photo by Dian Zagorchinov).

Winning over the audience through her sheer force of this range of feminine expression, Duquette drives home her message about interactive live performance as a vehicle for resolving the tension of the opposites (Buber's I/Thou) exacerbated by Web 2.0.

The very structure of Celebrity Bound executes its own binding of the performer's inner tension of opposition, the artist/celebrity, by framing this one-woman engagement with Self within a puzzle worked out through projections transposing the personal into the universal. 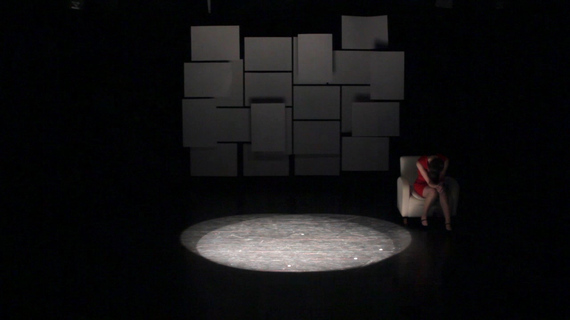 The screen puzzle of the set backdrop resolves the problem of fame in the 21st century through the horizontal/vertical integration of opposites into the holistic sphere of the hierosgamos, which is how the show ends, with the projection of the jigsaw puzzle integrated into the 21st century of Self through the artist's multiple expressions (Photo by Dian Zagorchinov).

In the opening, the puzzle was a telling artifact: the Artist's digital intervention into the famous Ellen DeGeneres' Web 2.0 iconic Selfie crammed with as many movie stars from the 2014 Academy Awards audience as she could grab from their seats. With this self-created interventionist image (click here to see a glimpse) the celebrity galaxy opens, at last, to include the Artist. The audience filtering in to Lady Gaga's celebrity-worshipping hit song Paparrazi from her 2008 debut album, THE FAME , is the Third element in the conversion, thereby completing the picture.

Conversely, the show closed with the jigsaw projection of multiple images of Duquette's multi-expressive face and David Bowie's 1975 hit FAME...

An apt choice, considering that Bowie came to Berlin for two years after making that song to escape his global celebrity and rediscover himself as an artist.

Lisa Paul Streitfeld, a philosopher and cultural critic based in Berlin, is author of Hermeneutics of New Modernism, presenting the Conversion as a 21st century philosophy.

Catherine Duquette has the copyright for all of the photographs in this post. As noted, live performance photos are by Dian Zagorchinov and the stills are from videos by Joseph Campbell.

All photos are published with the permission of the artist and English Theatre Berlin.