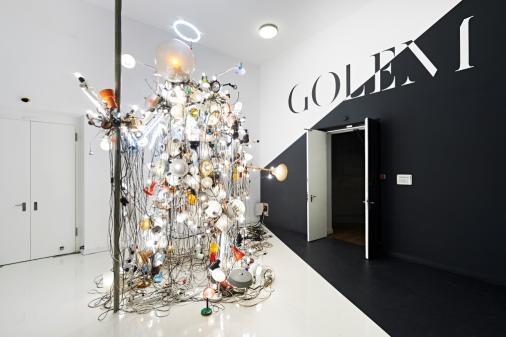 GOLEM opened on 23 September 2016 at the Jewish Museum Berlin. Curated by the German American female duo, Martina Lüdicke (German) and Emily D. Bilski (American), the breakthrough exhibition ushers in an essential new dialectic of the Shadow simultaneously into academia and the international art world in 2016.


The golem can look back on a long career, in Judiasm and far beyond. Its story begins in the Hebrew Bible and continues, in constantly new transformations, into the present day. The ancient human dream of creating artificial beings connects with today's world: genetic technology and artificial intelligence, computers and robots. All these endeavours to create a kind of golem.
--Peter Schäfer, Director of the Jewish Museum Berlin


Indeed, the bible story of Enki, the Aquarian god, out to prove that men don't need a womb to create life as he fashions a human out of clay, might be taken for an Aquarian mythology. Yet, more likely, this mythology reveals the Shadow of the Aquarian Age neglecting the feminine role as an equal partner in natural creation as germination of a seed. 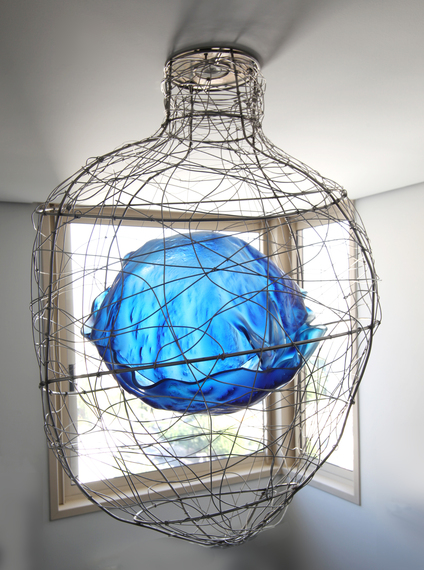 The golems of Israeli artist Mira Maylor reveal the alchemical rite of centering the seed within the vessel.


Appropriately, GOLEM has seven chapters reflecting the seven levels of the Ziggarret where the hieros gamos was celebrated in ancient Sumer. These include: The Golem Lives On (the golem of computer games and action figures), Jewish Mysticism (juxtaposing medieival manuscripts with Golem recipes with contemporary artworks), Transformation: Art as an Act of Creation (the alchemical process by which the golem escapes its creator); Legendary Prague: The Myth Continues (two exhibition rooms revealing the legend of the 16th century Rabbi Judah Loew, who created a golem out of clay to protect the Jewish ghetto from persecution); Horror and Magic ins which the three channel installation of AE/MAETH by Stefan Hurtig and Detlev Weitz juxtapose clips from Wegener's cinematic masterpiece The Golem: How He Came into the World of 1920 with Frankenstein (1931) and more contemporary films); Out of Control, the Golem as Protector and Destroyer (exploring the narrative of the responsibility of creation reflected by exhibition objects); and finally, Doppelgänger and Epilogue revealing the mirror image as Shadow permeating the culture. 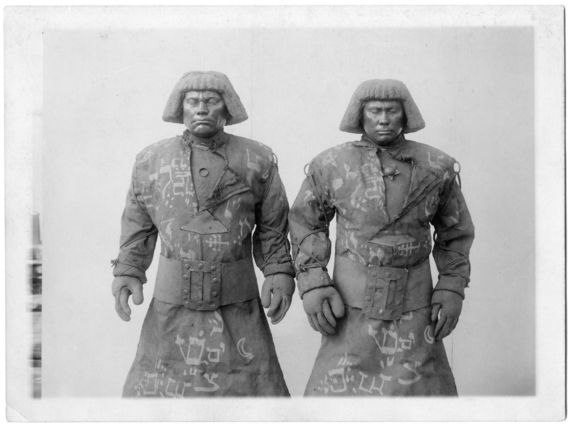 Today's leading Kulturindustrie theorist, Dr. Laurence Rickels, has been the pioneering interpreter of the Shadow in academia through his psychoanalysis of the popular genre of the horror film. His penetrating research of the past two decades reveals the vampire to have entered German literature through the doppelganger. The utilization of the terminology of doubling (Doppel) for the Shadow associated with the life-draining vampire is significant. This is the external projection utlized by the film medium of celluloid to evoke the internal barrier to human transcendence out of realism. 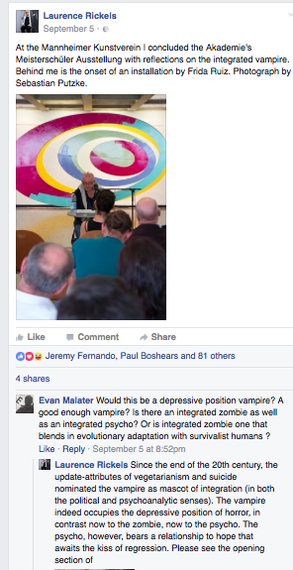 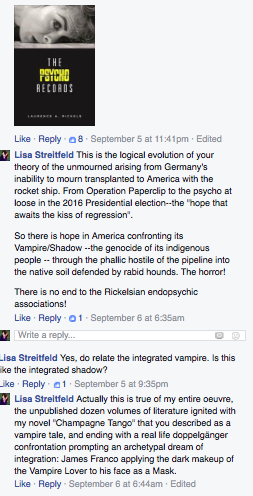 By way of his 2016 entry into social media, a dialogue on his Facebook page drew direct correlation between his terminology of "Vampire Integration" and Shadow integration, thereby creating a direct parallel between the Jungian terminology and that of continental philosophy:


The occult associates ego with Saturn, known as Old Man Time depicted with an hourglass, thereby projecting the inner barrier outward; Saturn is the last planet revolving around the Sun with the Earth that can be seen by the human eye. That the ancient cultures projected this feeling of fate onto the planets (the wanderers) established the art of astrological prediction. Saturn represented the ego boundaries to the transcendental expression of the outer planets that could not be seen, but only felt in fleeting impressions of the spirit. The effect of this energy on the human body is that of time and therefore as fate, i.e. the agonizing feeling that the outcome of events is a result of measures adopted through time reaching a culmination that is beyond human means of control. 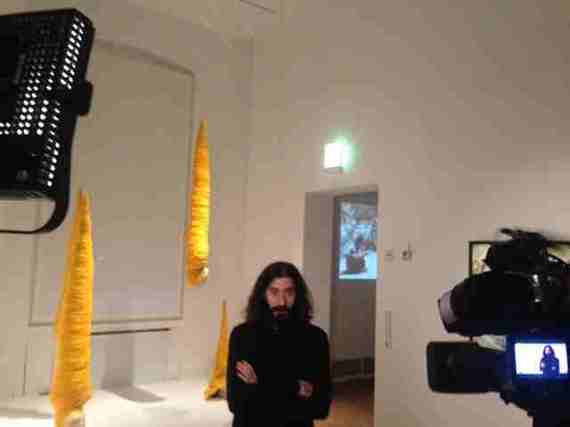 The monstrous golems created by the binary media as a result of political turmoil provided the fissure in the collective to usher in a dialectic of the Shadow into western art and the academy at the same time. The first target required the revival of Carl Jung, not as a philosopher or prophet, but as artist, with The Red Book as the literal centerpiece of the 2013 Venice Biennale. Subsequently, it means revealing the founder of depth psychology's personal process of penetration into the archetypes of the collective unconscious by means of ego breakdown. Once confronted at the border that had both internal and external meaning for his breakthrough, Jung was capable of interpreting the Shadow as a universal archetype.

The birth of a new astrological age, Joseph Campbell informed us, is accompanied by the archetypes of a new mythology. These will surround the icon that Jung referred to as the Self and Wolfgang Pauli interpreted, along with Richard Tarnas, as the ancient icon of the hieros gamos.

The ways that contemporary artists can give form to this newly emerging archeytpe and its Shadow are as numerous as the artists' themselves. I have personally confronted the mythology of this human awakening in the studio of the Manhattan artist Barbara Rachko, whose "Black Paintings" are the apothesis of this former Naval commander's process of loosening ego control and entering the hieros gamos of right/left brain to filter the personal and collective Shadow into her narrative trajectory after her husband was killed in the 9/11 attack on the Pentagon. 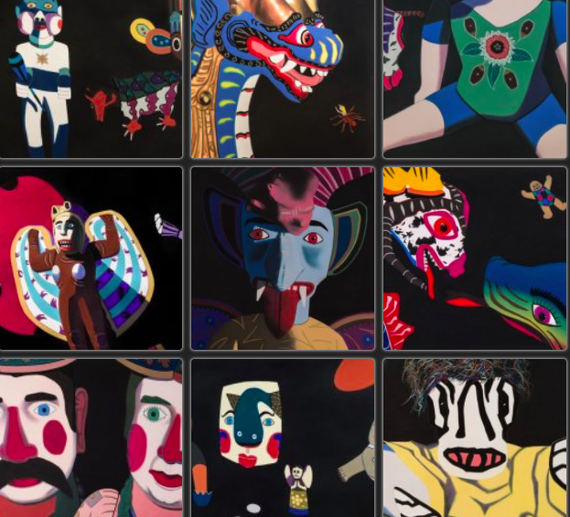 
GOLEM is the authentic irony of our current epoch: the Monster that breaks down the wall between ego and the uncertain realm of dark energy has the sheer force to explode boundaries between the art world and the academy while pointing towards the human transcendence that comes with surrender into the 96 percent unseen universe.

Dr. Lisa Paul Streitfeld is a Kulturindustrie theorist and critic. Her 2016 dissertation is entitled "ÜBERMENSCH: Nietzsche, Salomé & the Ages of Aquarius". See HERMENEUTICS OF NEW MODERNISM for writings on the Shadow dialectic.

Dr. Streitfeld will be presenting "Excavating the Templar Treasure: Re/Searching the Hieros Gamos in Artistic & Critical Practice" on December 4, 2016 at the CARU Arts re Search Conference 2016 at Oxford Brooks University, Oxford:
"What does it mean to research art / to research through art?"