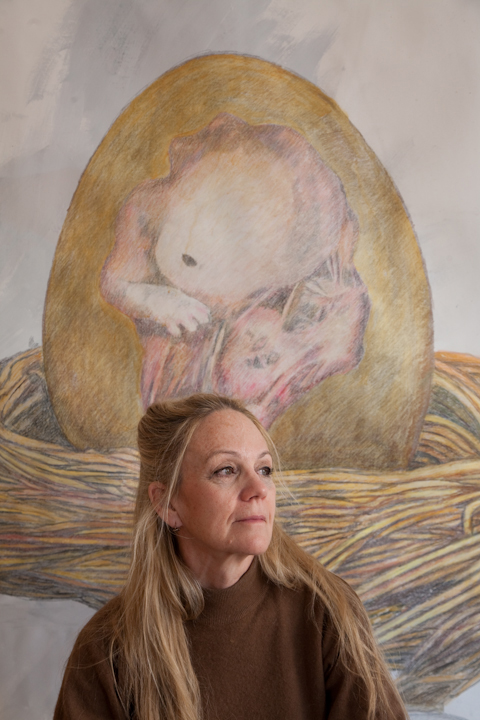 Ann McCoy photographed by Peter Dressel before the nest revealing the timeless feminine act of the marriage of right/left brain transmuting the death of the old order into the 21st century icon of the hieros gamos foreseen by Pauli as emerging from the collapsed wave.

At the entrance to Ann McCoy's timely Pacific Standard Time Exhibit at Bleicher Gallery, is a timeless sculpture...

Forged out of the lead of McCoy's night sea journey, this is the alchemical gold summing up the luminous Ovum Philosophorum. The muted, veiled albedo of "Sanctuary" (displayed in "The Alchemist of Pfaueninsel'" last year) 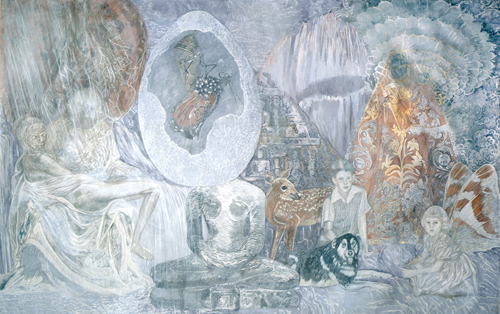 ...now opposes the nigredo in the defined figurative drawing The Death of my Father completed just prior to the April 21 exhibition opening... 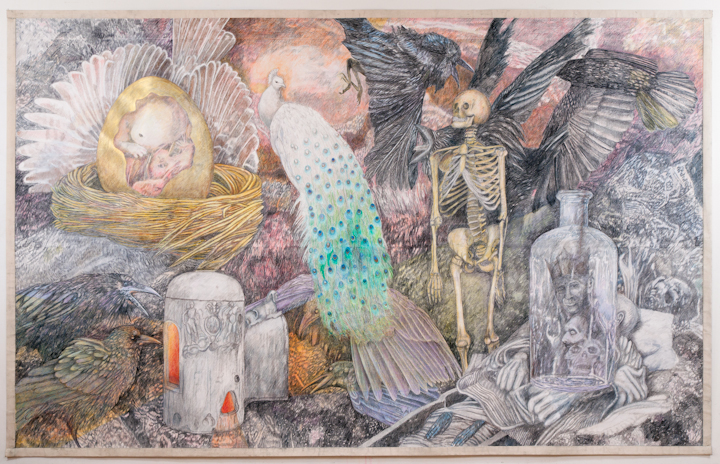 "The Death of my Father" (9'x14', 2012). The right to left narrative transmutes an intensely personal drama into a universal passage by way of alchemy.


While horses represent the feminine libido, the fact that they are not tethered, yet proceed one another in orderly fashion, is key to the understanding of McCoy's art. Her artistic rendering of the Great Work arises from an acute filtering of the collective unconsciousness.

The time-worn process of connecting the inner eye to hand on paper controls the outcome. The bull in the boat is a symbol of the constellation Taurus, the exhibition opening on the 2012 Taurus New Moon conjunction to Jupiter ushered in the philosopher's egg via the birth of a new feminine consciousness. 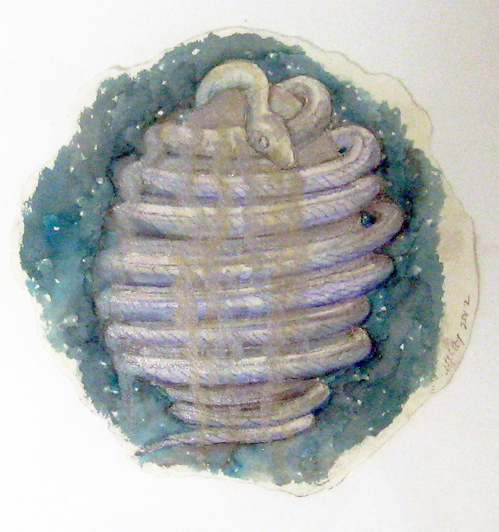 True to its title, Opus Philosophorum contains the Philosopher's Stone deciphering the birth of a new feminine archetype. The stunning small works framing the large autobiographical narrative drawings isolate her alchemical language by way of transformational symbols such as the fetus, the rose, the butterfly, the egg and a bird emerging from the shell. 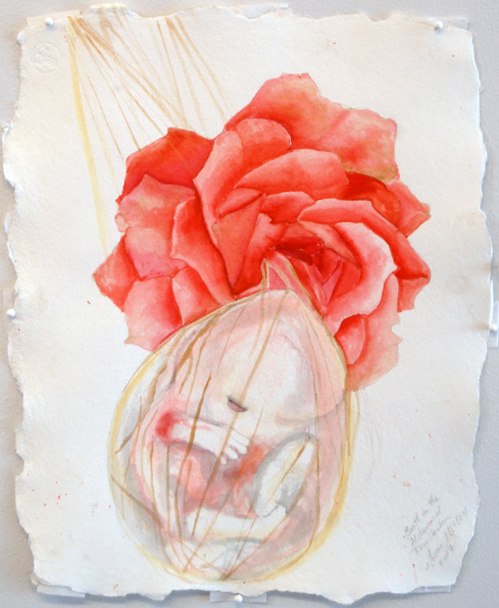 The very objectivity of McCoy's drawing -- its hand rendered weaving symbolized by the nest containing the egg of the divine birth -- makes it so startling in its subjectivity. The juxtaposition of the objective death of Mother and Father, with the artist herself as the rubedo sacrifice - the symbol of the triangle under the vagina in Mad Mother Realm... 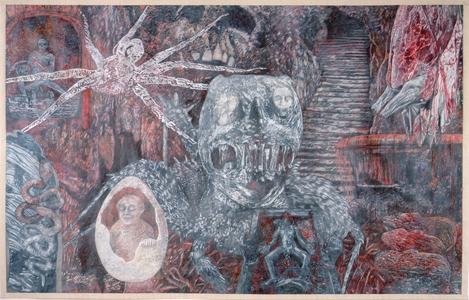 -- can now be appraised from the Jean Gebser 360 integral perspective in collective experience: 2012 as the death of the old order -- the patriarchy with its linear hierarchy relegating the kundalini charged female to the dustbin of the insane asylum.

The narrow space of Bleicher's La Brea gallery gallery serves as a birth canal for the imagery of rebirth -- the ovum or egg. The wing is symbolic of the element of air -- the alchemical stage of the sublimatio which sums up McCoy's transmutation of the prima materia of personal sacrifice demanded by the penetration into personal narrative.

The crucial nature of Ovum Philosophorum can be found in its very source: the energy of the female libido given form in the Rubedo. This vast storehouse of feminine creative energy has been largely repressed as a subject for art by the feminist dominated academy. Yet, Processional with Light Bringer calmly guides us to the collective timing of McCoy's self-revelation of her own lineage...

...which serves to bridge 20th century psychology to a 21st century archetype through the visual rendering of the artist's dark night of the soul. McCoy's father knew Frank Oppenheimer, the brother of Robert Oppenheimer and died from radiation stemming from his work in rocket science -- a field replete with occult origins stemming from JPL founder Jack Parsons, who invented the rocket booster while a member of Aleister Crowley's magical order and blew himself up after seeking to conceive a divine birth with actress Marjorie Cameron.

McCoy's own journey into her soul brought her into direct lineage with theoretical Austrian physicist Wolfgang Pauli, who was in analysis with C.A. Meier, McCoy's longtime therapist.

Here is a definite sign of procession. The dark feminine figure haunting Pauli's dreams was incorporated into a 30-year dialogue with C.G. Jung about the 21st century icon, the hieros gamos (sacred marriage of opposites) heralding the gender balance of the Age of Aquarius. 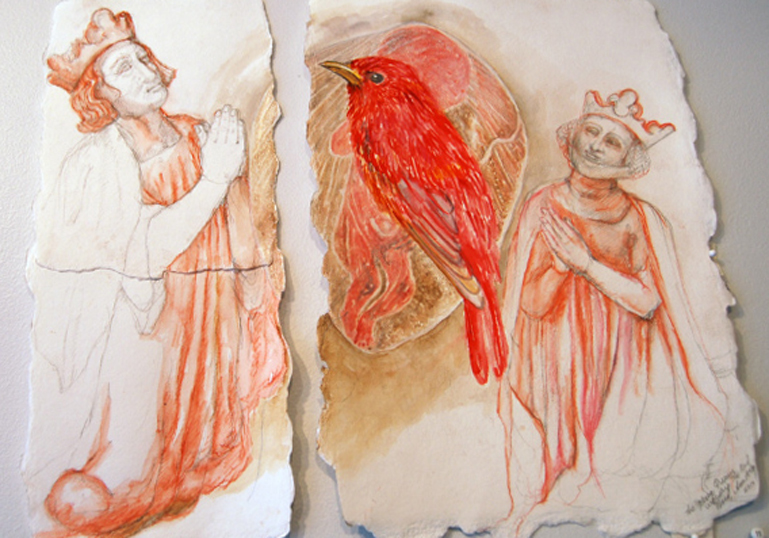 Clearly, we cannot collectively enter an era of equal partnership and gender balance until the dark feminine is consciously incorporated into the psyche. While Pauli did a great deal to transfer this feminine force from a dream specter into the consciousness of 20th-century psychology by way of his long correspondence with Jung, McCoy's artistic rendering of the Great Work reveals the societal repression of the kundalini power that is only now becoming a buzzword among the spiritually enlightened.

McCoy has been on the front lines -- in the academy that largely rejects the Jungian model of the collective unconscious in the interest of imposing superficial application of postmodern deconstructionist theory. To have an artist whose very lineage reveals the participation of such prophetic minds as Pauli and Jung in evolution surrounding the role of the consciously emerging kundalini-fueled power simultaneous to the dark feminine figure rejection in the feminist dominated academy is a lightening strike to the ivory tower of belief built on a false theoretical foundation constructed of the animus-dominated female rejecting of the very chaos surrounding the McCoy night sea journey.

The individuation process embedded in The Death of my Father consists consciously killing the crowned Father, the Old King. The rebirth is foreseen by the winged skeleton, formed from the wings of ravens attacking the corpus, against a ground of a rosy dawn. The face looks to the alchemical transmutation -- the peacock with its emerald feathers reflecting the green of the heart chakra. A pair of docile ravens guard the fiery furnace covered with naked figures of a man and woman. This heats up the ovum, where a genderless being is emerging from the egg in a winged nest rendering the contents divine, connected to heaven. This figure, in absorbing the sacred marriage of masculine and feminine from the furnace, reflects a new icon.

Herein lies the Light Bringer as society's renegade. The patriarch is not only external but exists inside of all of us. Until we can transmute the inner authority that denies quantum leaps generated by multiple expanding consciousness, we cannot embody a new cyclical paradigm. The artist shows us the way.