Israel functions as the shadow terrain of United States, in that American citizens don't have to face the effects of global terrorism that Israelis have to confront on a daily basis. 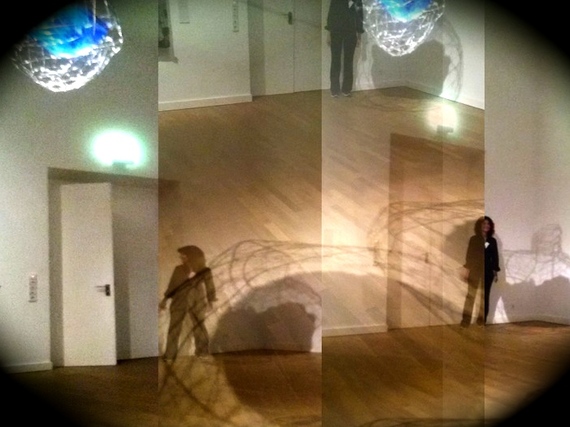 Mira Maylor interacts with the shadow of her "GOLEM", a centerpiece of GOLEM, the breakthrough exhibition at the Jewish Museum Berlin until 29 January 2017.

This is what makes the sudden rise of Israeli artist Mira Maylor so crucial for 2017, a year of profound shift in global realignment as we move into the evolved consciousness characterizing the Age of Aquarius.

Maylor starky elicits the emotional effects of separation between the world's people who share a common fate: the imminent man-made destruction of the planet. 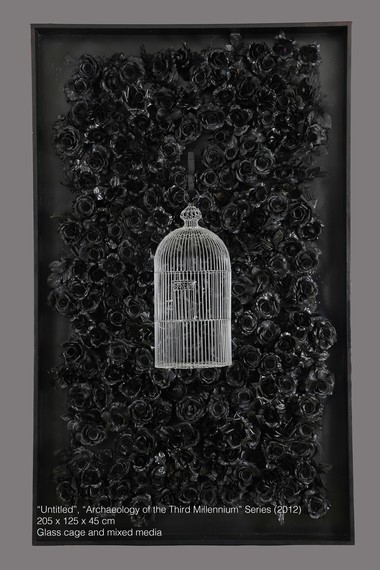 The core value of Maylor is the awakening feminine essential for the birth of an authentic gender equilibrium in the Age of Aquarius. 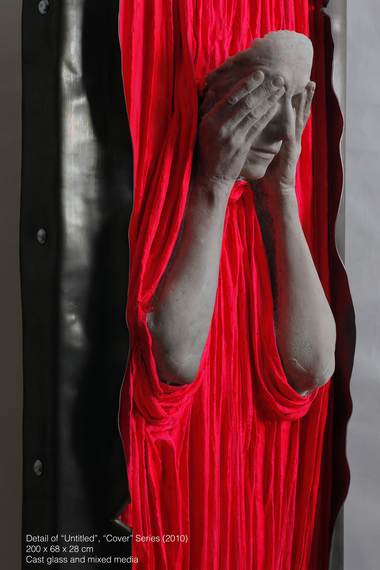 Her iconic artworks evoke a new/ancient dialectic of artist as myth-maker. 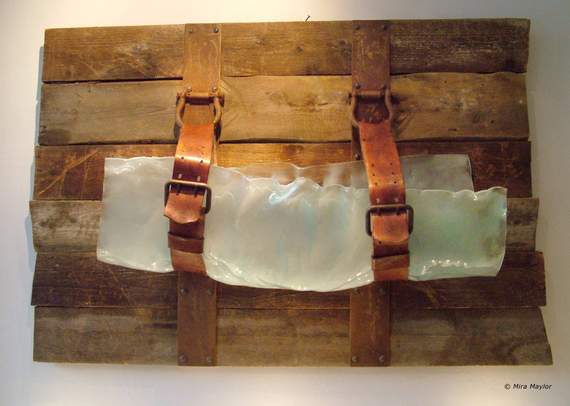 Have tools will travel: "A Traveling Bag for the Mythological Traveler" (2008) implicates through its materials...

...the mythical artist filtering the 360 personal/universal narrative via the marriage of the right/left hemispheres of the brain. 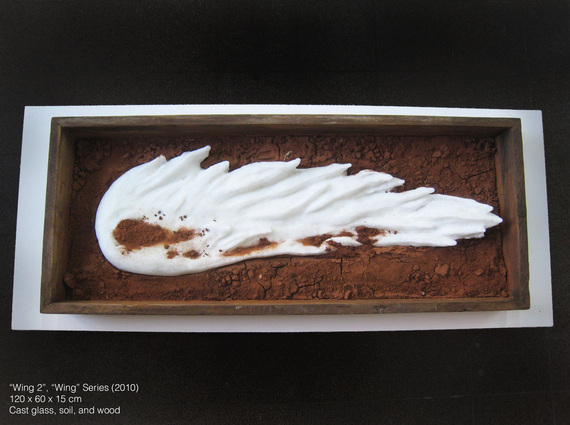 Maylor's original vision of the hieros gamos (sacred marriage) of Heaven and Earth.

Born into a family of Holocaust survivors, Maylor's iconic artworks upset the status quo, as all great art does, in revealing the gatekeepers supression of the true value of art -- the illumination of the unconscious stream of life. 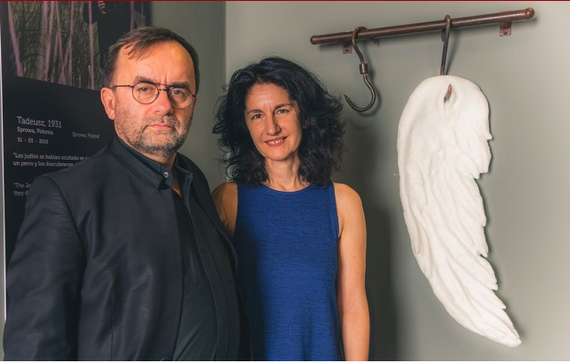 Maylor (with Father Patrick Desbois, President of Yahad, at the Museo del Holocausto Guatemala opening of her solo exhibition "Memorias del Holocausto a traves del Arte") has activated, by way of geography, unspoken parallels between the genocide of the Jews and that of indigenous people around the globe.

In Israel, the feminist adage "the personal is political" is all the more apt of the long-repressed dark feminine that went into exile with Lilith to resurrect at the close of the second millennium through the popular culture (Lilith Fair). 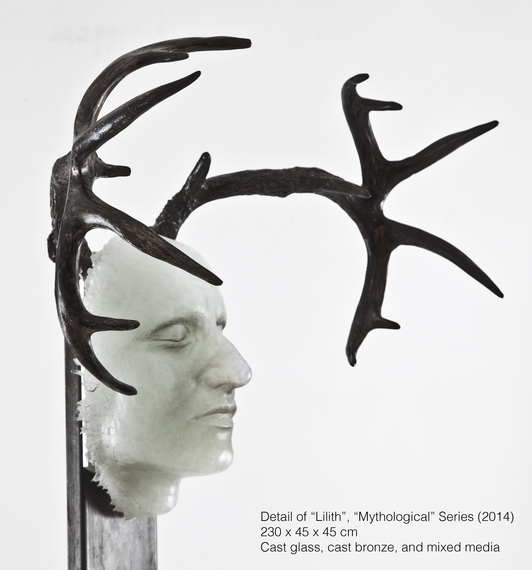 Maylor casts herself as the androgynous goddess of ancient Jewish mythology -- known as the first feminist because, as Adam's first wife, she refused to lay under him.

Maylor's art penetrates so deep that her images transcend the walls that serve as her chief motif. A Holy Grail of symbol infused by mastery of technique and material, her art rises above the turmoil and confusion of the present epoch of Uncertainty. Working in series that allows for both the (r)evolution of narrative and singularity of the icon, the sharpened multi-dimensionality of a Maylor sculpture commands the observer to step back, pause, and reintegrate their status to become participant in the global awakening of the 3rd Millennium. 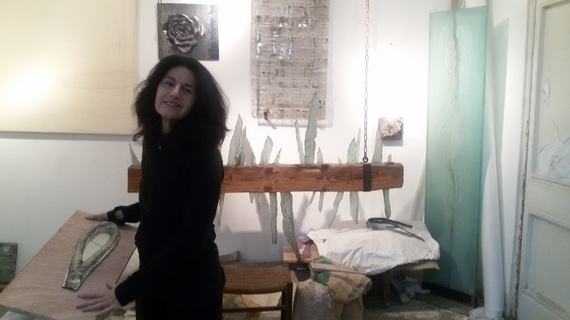 In the multi-religious ancient port of Jaffa, Maylor works on "Momento Mouri" in her studio where a wall presents her motifs as metaphors of humanity's choice: Eros, Thantos or the Third?

Imbedded into her archetypal materials -- wood, glass, iron, metal -- the lone symbol on the blue and white striped Israel flag, the Seal of Solomon... 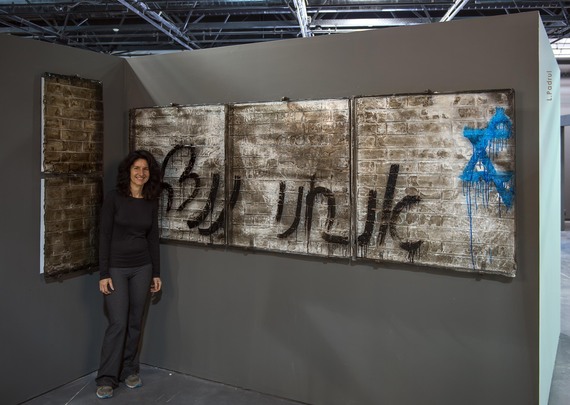 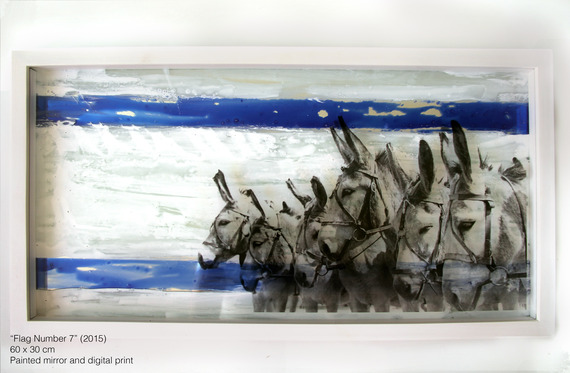 Are the six donkeys heralding, or preventing, the emergence of the ancient and future mythology of the ever-present icon, the hieros gamos?

These unanswered questions about the future of humanity lie at the core of Maylor's art.

Mira Maylor has been selected for the Jerusalem Biennale 2017. Her GOLEM is on view at at the Jewish Museum Berlin until 29 January 2017. Her solo exhibition "Memorias del Holocausto a traves del Arte" is view at the Museo del Holocausto Guatemala through February. A selection of her works are on permanent view at TLV Art Gallery in Tel Aviv, ZK Gallery in San Francisco, and Echt Gallery in Chicago.

Lisa Paul Streitfeld is a philosopher and cultural critic based in Berlin on a global search for the ancient and contemporary iconography of the hieros gamos. See https://hermeneuticsofnewmodernism.com

All images courtesy of the artist Mira Maylor and the Museo de Holocausto Guatemala.