"The egg of the philosophers, the ovum philosophorum refers to the vessel in which the creation process takes place. Many creation myths begin with an egg that divides and constructs the world, for example, part of the shell becoming the sky ... the egg gives birth as a universal parent ... The egg becomes subject and object for the alchemist who is transforming himself perpetually... Decay and rebirth are implied when the egg decays and the bird is born..." -Ann McCoy, alchemical artist 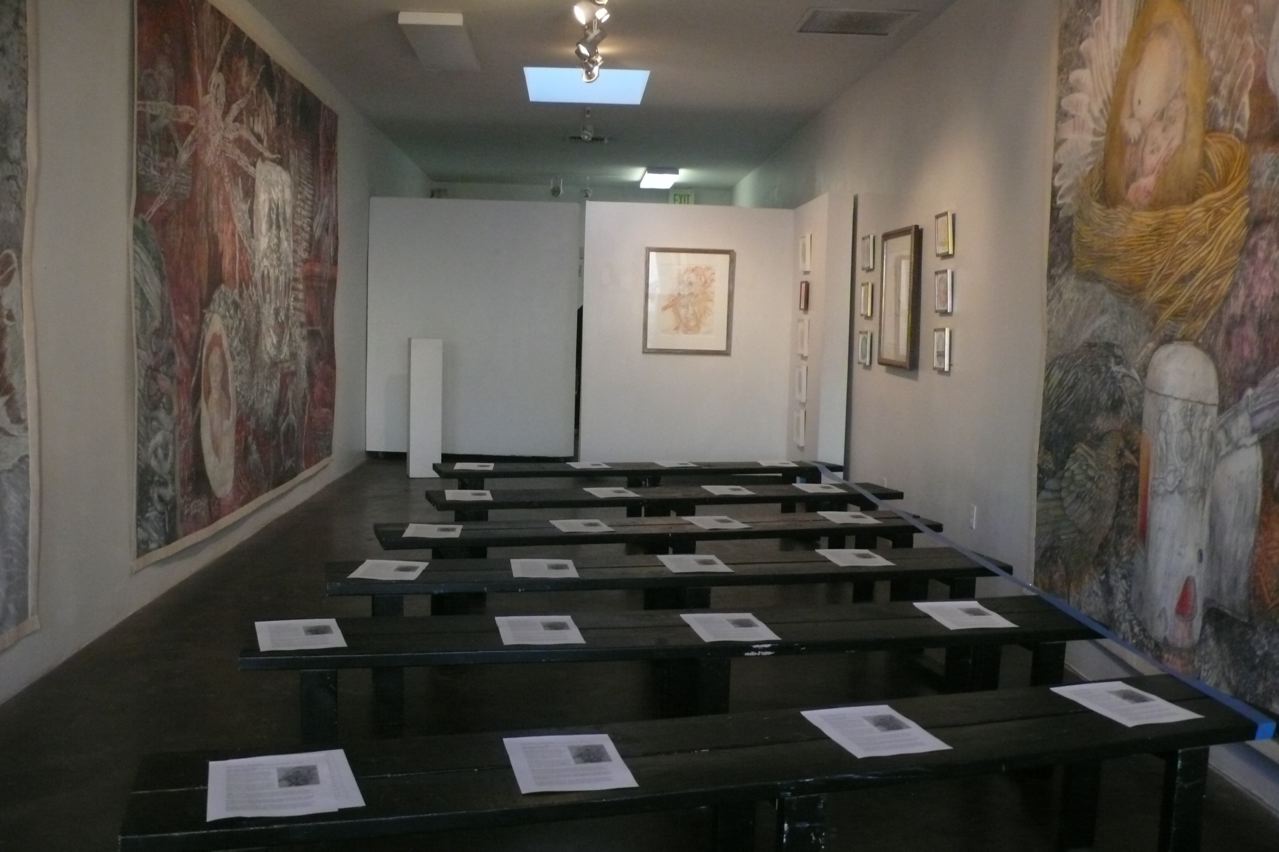 Ann McCoy's magnificent drawings of her own alchemical opus known as The Great Work served as backdrop and birth canal to the birth of a multimedia poetic form arising out of a hermetic tradition -- Goethe's alchemical writings -- under the first annular eclipse of the Sun visible from the United States since 1994 . Photo by Wanda Deca. 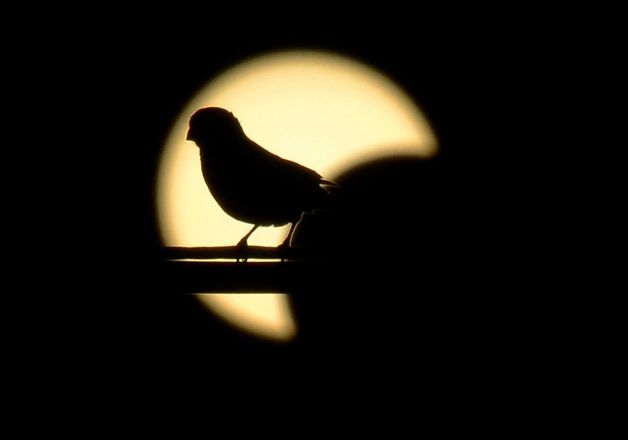 A small bird rests at a powerline backgrounded by an annular solar eclipse seen from Los Angeles California on May 20, 2012. Photo by Joe Klamar, staff / AFP

In Planet Waves, a newsletter forwarded to me by McCoy, Eric Francis writes about his discovery of a little known asteroid, Sulamitis, joining the interior conjunction of Venus with the Sun. He discovered Sulamitis to be the female character in the Song of Solomon. This passionate poetry poetry about eternal love between a man and a woman is a relic of the Sacred Marriage Rites from ancient Sumer. 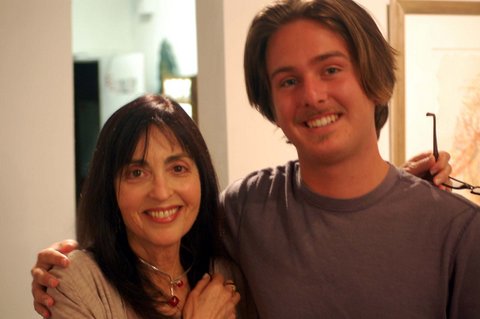 Alchemical poet Dorraine Poretz and her guitarist accompanist Will Munroe performed at Bleicher Gallery on Friday May 18. Photo by Peter Mayor


In a series of secret alchemical events leading up to the Solar Eclipse, which took place on May 20 at 4:47 PDT, the alchemical transformation into the 21st century icon of the hieros gamos in the space of the art gallery got underway. 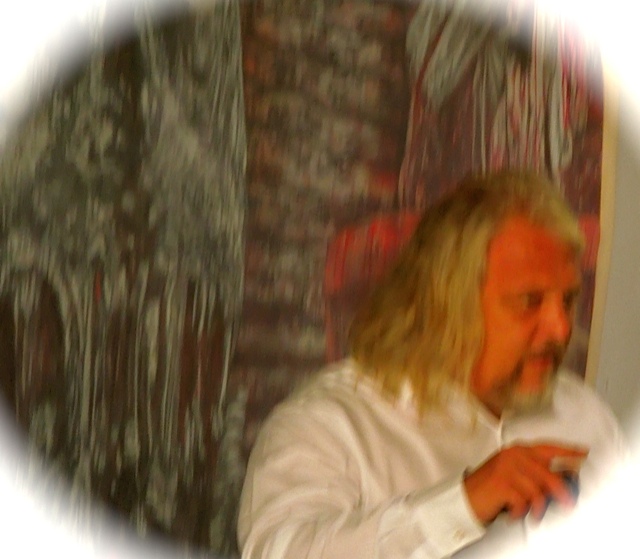 This was followed by readings from Goethe's Roman Elegies : 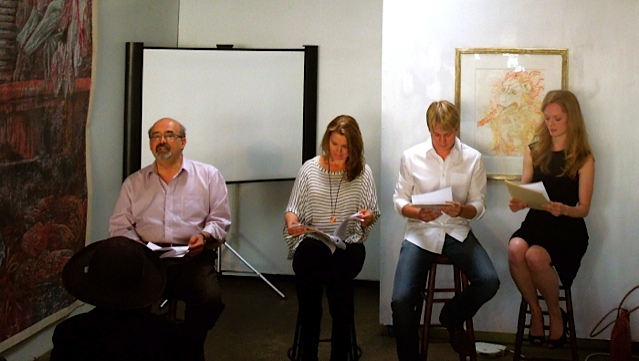 (R to L) Louis Fantasia, Isabella Hoffmann, Paul Story and Jessica Spotts reading from Goethe at Bleicher Gallery in Los Angeles during the passage of the Moon between the Earth and the Sun on May 20. Photo by LPS

The evening concluded with a selection from Gustav Mahler, the great composer who incorporated the divine feminine and cycles of nature in his music. The audience was transported from the alchemical sublimatio of McCoy's vision to the 21st century icon of the hieros gamos symbolized cosmically by the Solar Eclipse.

The ancient alchemists saw transformation in eclipses. The eclipse symbolism of the marriage of the sun and moon represented the anima mundi, the unity of the "world soul" arising out of the duality associated with the luminaries. The dance of Venus across the face of the Sun during this eclipse cycle is a heavenly reflection of the creative feminine expression of this alchemical wedding. The 2012 eclipses in the constellation of Gemini are ruled by Mercury, the patron of alchemy. So, it is right in alignment with the alchemical adage "As Above, So Below" that the magical couple... 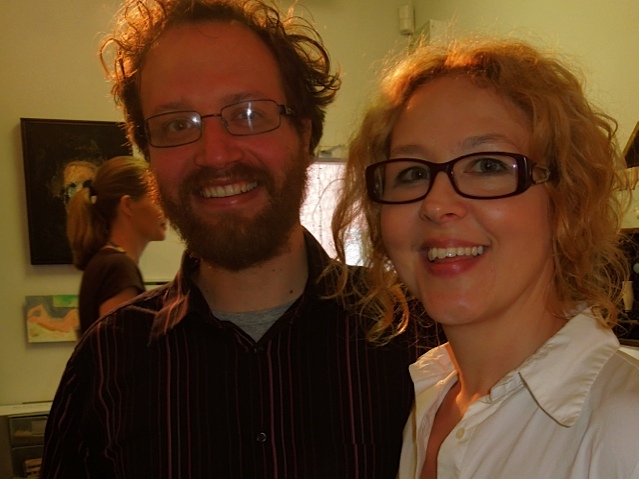 Om Navon Bleicher and his partner Shaye Nelson ushered in the visionary voice of the divine feminine into the art gallery.

The June 6 Venus Transit, aligned on the ecliptic with the 2012 Gemini eclipse cycle, will not occur again until 2117, 105 years from now. This rare "alchemical marriage" in which Venus can be sighted crossing the disk of the sun, is a cosmological reflection of the emergence of the authentic voice of the feminine, which combines both right and left hemispheres of the brain. 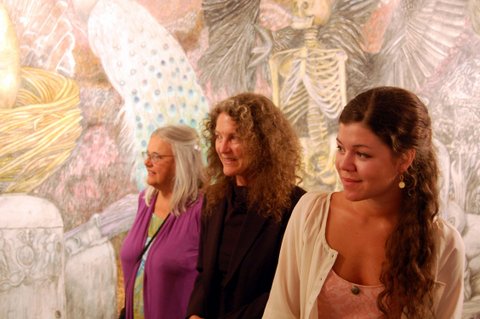 A week before the Solar Eclipse the lauded poet Annie Finch delivered the prologue of her breakthrough new book, Among the Goddesses at the ASWM conference in San Francisco, where the writer/poet Ana Castillo delivered a keynote highlighting the astrology of the Venus Transit and its connection to 2012 that itself served to announce the arising of the divine feminine voice.

By the third morning, weak and thirsty,
no longer nauseous, I lay in a daze,
waiting for Kali. I waited till evening,
with Inanna's eyes on me, steady
as the sun she ruled ruled the day,
and stopped at dusk All I wanted was there,
day and its lover, night and its lover,
brought by Inanna. They healed the pain.
In the gray light, I left the room.

Annie Finch's Among the Goddesses: An epic Libretto in Seven Dreams was performed at the ASWM 2012 conference.

What makes the poetry of Annie Finch and Doraine Poretz so new and exciting is the female awakening it signals within its very formalism of embodiment. This honoring of the erotic power of the feminine voice to integrate the opposites is being beamed down to earth by the Venus Transit across the face of the Sun in the constellation of Gemini, ruling the marriage of the right and left hemisphere of the brain. While Venus transits in regular, predictable cycles of eight years, the Transit of Venus across the sun is a rare occurrence in which the Aztecs were awaiting the Return of Quetzalcoatl (Venus) when Cortes arrived in Mexico.

The hieros gamos embodied in the erotic feminine voice present in the songs of ancient Sumer, the ever-present origin of the Sacred Marriage Rites from which these unique and wondrous passages in the gospels are derived. In this alliance with the pre-patriarchal Inanna, they fly in the face of conceptual art and poetic formlessness, giving voice to the long repressed eroticism of the divine feminine, Sophia, whose integration of the opposites is the goal of western alchemical tradition. Hermeticism provides a rich artistic vocabulary, as well as formal structure, for underground transformative verbal art forms exposed under this Transit of Venus in the alchemical constellation of Gemini.

What is Bleicher's secret alchemical experiment leading up to? Prior to the June 4 Lunar Eclipse, where the Earth is aligned with the Full Moon in Gemini/Sagittarius, Bleicher Gallery will host the last of secret performances as a passage to the sacred marriage for the contemporary art world.

Poretz, a founder of the Venice Poetry Workshop at Beyond Baroque, will perform her alchemical fairytale "The Moons of Kashar" with actor/artist Leigh J. McCloskey, a visual philosopher who has explored the psyche and archetypes through the body as actor and painter. The inspiration of the piece is a quote from the great poet Rilke, "Perhaps all the dragons of our lives are only princesses, waiting to see us at once beautiful and brave."

"The Moons of Kashar"will be performed on June 1 at 7:30 PM at Bleicher Gallery 355 N La Brea Avenue in Los Angeles CA.

Lisa Paul Streitfeld is a cultural critic and alchemical writer seeking art forms sourced in her 21st century art theory, the final stage of alchemy, the hieros games. You can view her alchemical art at www.shivalisapaul.com, and the five chapter The Alchemy of Love in Five Elements performed at the Lab Gallery in Manhattan (2007-2008).