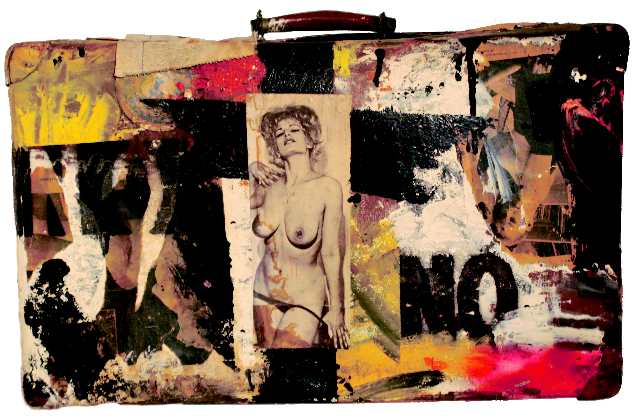 Only if it had arrived in a suitcase could the entrance of renegade Boris Lurie and his NO!art movement into a museum have been more fitting.

Tucked away into a back gallery on the second floor of the Chelsea Art Museum, Boris Lurie NO! was first of a series of exhibitions by the Boris Lurie Art Foundation with the goal of resurrecting a shadow movement which supplied what was missing in the officially sanctioned art of the 20th century. 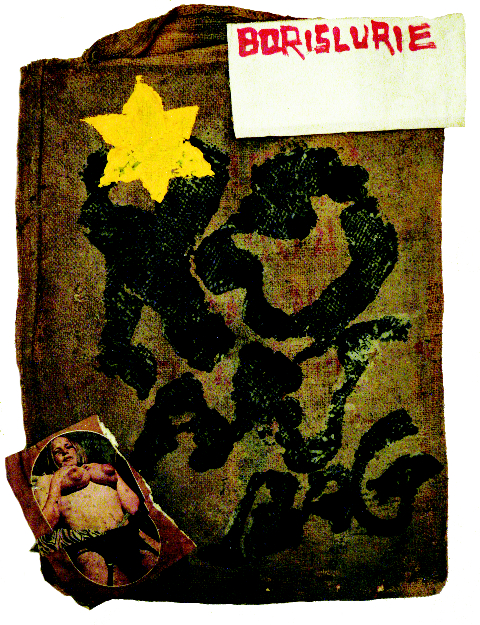 On an entirely different level, and do not be surprised! -- the pinups constitute the contents of unaccounted mass-graves of executed Jewish women of World War Two. Their physical sensuality, their feminine gigantism, their pure anger masquerading as ecstasy in their twitching orgiastic faces, is nothing but a cover-up then for sublime affirmation, of anti-death procreation, of pure though hysterical, death frightened, pre-execution protestation.
-- Boris Luie, SELECTED PINUPS, 1947-1973

Ironically, what makes Boris Lurie (1924-2008) so relevant in painting today is his deeply sourced integration of all of these movements -- Abstract Expressionism, Pop Art, Minimalism, Feminist Art and Postmodernism -- in a viscerally explosive style that absorbs them all into a marriage of art world dichotomies so fresh and startling, it is as if they were just painted today.

Many of them have "NO" scrawled across the surface. The single utterance of protest, unifying Nazi imagery with the American pin-up, as a manner of saying... 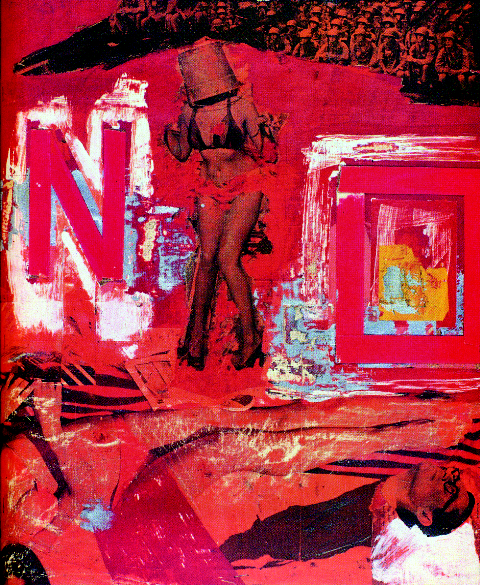 "NO! with Pinup and Pail" 1962, oil and collage on canvas, Boris Lurie, Courtesy of the Boris Lurie Foundation

Lurie's art, misunderstood and condemned (when it wasn't utterly neglected), carries a single-minded integrity of purpose missing from art today -- negation screaming out against the inauthenticity of the marketplace and the art world system that supports it. The truth the artist proclaims through this negation is that art cannot proceed forward until we address the degradation and denial of the dark feminine in Western culture. The feminine face of divinity hidden beneath the commercial exploitation vehicles - the American pin-up and its iconic flattening via sixties pop glorification - the artist was condemned to expose by way of his tortured personal history. 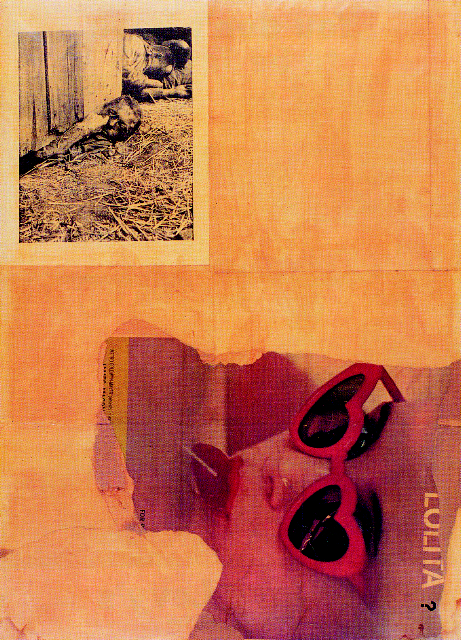 Lurie was a concentration camp survivor whose art is a response to the the loss of his mother, his sister, and childhood sweetheart in the face of human cruelty and indifference. Yet, in fighting the repression of the past in America's future bound consumer society of unbridled commercial optimism, Lurie's personal struggle with the collective shadow made him a legendary figure of the East Village of the fifties and sixties.

Beginning with his 1955 Dancehall Series, Lurie coaxes the shadows of his past out into the light.. 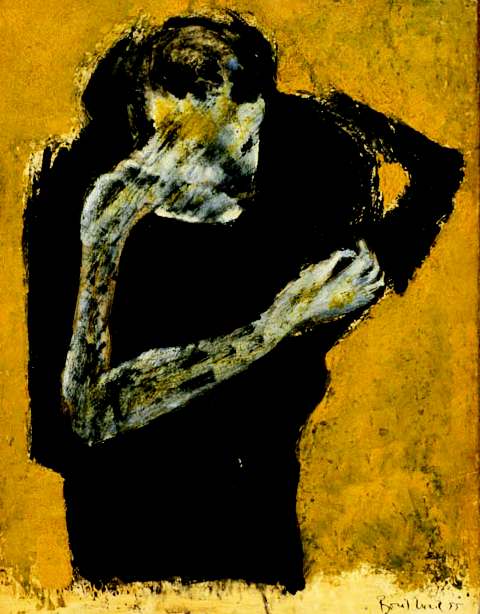 - where he subjects them to dismemberment... 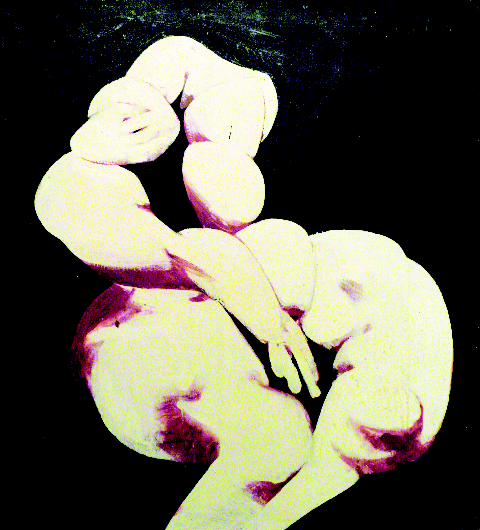 ...and ultimately recognition, reconfiguration and empowerment through literature. In the works for forty years and published two years after he died, House of Anita is Boris Lurie's literary novel/manifesto concocting a systematic satiation of female desire. Sadomasochistic, surreal and absurdist, it turns the tables, quite literally, on human intercourse:

Three servants -- Hans, Fritz and myself -- are to slide into drawers under the Mistresses' dining table, whose top is pierced by several round openings, none larger in circumference than a regular erect penis. The white tablecloth covering this table has identical holes, matching the holes in the tabletop. Each drawer is just large enough to contain a man's body, with no room for bodily movement, but it is not uncomfortable in the least.
-- excerpt from House of Anita by Boris Lurie, 2010, NO!ART Publishing, Boris Lurie Art Foundation 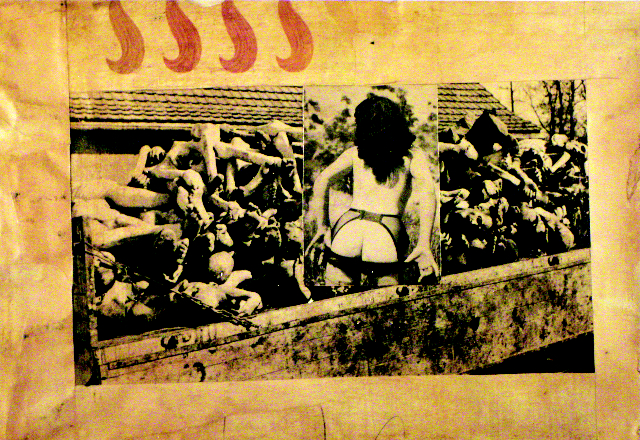 "Railroad Collage" 1963, Boris Lurie, Courtesy of Boris Lurie Foundation, was the artist's most controversial image, selected for the cover of his manifesto.

He mimics the Nazi terrors in his imagery by visually destroying female objectification in order to give birth to a new reality - a future in which the feminine force is regarded as a divine power rather than a source of human shame. 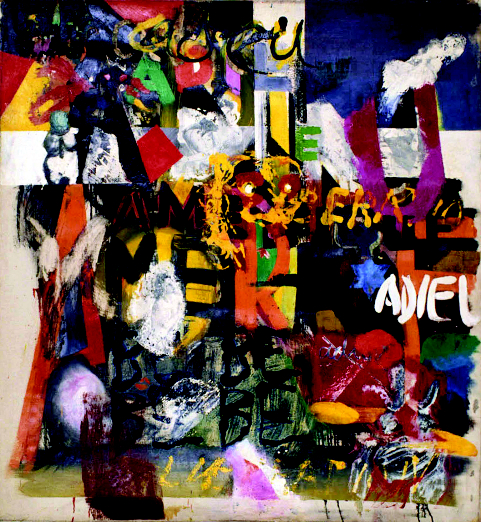 "Adieu Amerique" 1960, oil on canvas, Boris Lurie, Courtesy of the Boris Lurie Foundation, demonstrated the artist's struggle with America, the only place Lurie could create,

In fact, in an art world searching for a center of enerngy after the demise of postmodernism, Lurie defines the avant-garde anew by shining light into a black hole. Exhibition curator John Wronoski, a longtime champion of the avant-garde marriage of word/image in his Pierre Menard Gallery which, fittingly, had Boris Lurie's NO! Prologue to a Retrospective as its last solo exhibition this spring before permanently closing the gallery. The resurrection of the 1960s avant-garde was a funeral for the present.

This poetry reveals a natural cycle. The avant-garde from the shadows of yesteryear are the rightful leaders of today in this grey zone between the death of postmodernism and the birth of a holistic 21st century archetype.

For the resistance of those condemned to remain in the shadows to cut to the visceral truth teaches the artists of today how to resist the pressures to conform. 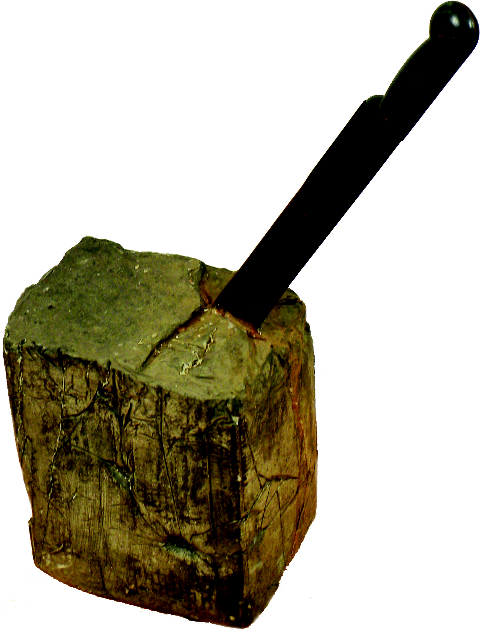 Lurie's art defies the very act of acquiescence - the numbing and succumbing to the expectations and demands of the marketplace at the expense of crystallizing the form of newly emerging archetype that makes the past obsolete but not forgotten.

And this crying out against a system even as the components deny their role in greasing its greedy wheels makes NO! the ultimate affirmation -- the impassioned commitment to an authentic art for the 21st century that can unify the opposites into a neo-Joycean divinely inspired YES!


"No! Show" at the Chelsea Art Museum through July 30, brings together key works of the movement for the first time since the early 1960s when a group of artists presented exhibitions in a basement gallery on 10th Street called the March Gallery, and then uptown in another basement gallery called the Gallery Gertrude Stein.

All images by John Wronoski, courtesy of the Boris Lurie Foundation