This is the way the world ends
Not with a bang but a whimper.
— T.S. Eliot 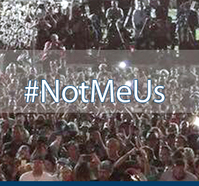 America needs a political revolution, as Bernie Sanders has been telling us for a year. But his "What's Next" livestream last week was disappointingly un-revolutionary.

Moneyed wealth virtually always gets what it wants from government. This is not just because of Citizens United. A peer-reviewed study conducted by researchers at Princeton and the University of Chicago documents that the pattern had already been true for decades.

The "billionaire class" has a stranglehold on the legislative process. Therefore it can block attempts at reform via constitutional amendment. Its influence dominates the executive branch, which enforces or fails to enforce the laws, and much of the judiciary. Its corporations control most people's media sources for understanding what is happening. I've seen no one even try to demonstrate that the .01 percent will allow us to amend away their near-monopoly on political power through electoral reforms.

To know how ruthless that class can be when it feels threatened, one need only look at their agents' federally-coordinated dispersal of Occupy encampments, infiltration and disruption of — and violence against — the Black Panther Party, 1950s repression of a Communist Party that basically organized people for what Bernie espouses, and unbroken decades of bloody foreign operations.

Yet in last Thursday's broadcast, Bernie seemed to reduce the political revolution to this:

I have enormous respect for the courage and energy Bernie has shown in carrying a message that includes so much of what we need. But I think he gave us a recipe that liberals (and I was one) have been trying for decades. The recipe hasn't worked, because, as Bernie so often tells us, the super-rich have a lock on our political system.

Let's look at a couple of Bernie's major points.

I look forward, in the coming weeks, to continued discussions between the two campaigns to make certain that your voices are heard and that the Democratic Party passes the most progressive platform in its history and that Democrats actually fight for that agenda.     — Bernie Sanders, 6/16 address

A year ago Robert Reich urged Hillary to start using populist rhetoric and, under Bernie's pressure, she has. Well, Barack Obama did, too. But then he supported big-bank bailouts while millions lost their homes, named Eric Holder — a Wall Street white-collar-crime defense attorney — attorney general, pushed the TPP and TTIP, vastly expanded a drone program that kills nine "collaterals" for every person targeted for assassination, went after whistleblowers but not torturers, defended a new law that gives the military authority to imprison indefinitely any of us whose activities it claims supports terrorists, oversaw an unprecedented number of deportations, and initiated a dangerous new trillion-dollar nuclear-weapons program.

Neither Republicans nor the tough economic situation Obama inherited made Obama do any of these things; corporate corruption of him and his party did. So if Bernie's talks with Ms. Clinton lead her to now promise "change we can believe in," can we believe her? She tells us, in effect: "True, I raised tens of millions of dollars from corporate heads, often at $225,000 for an hour-long speech. But you can trust me to represent you, not them. I conned them into believing they'd get their money's worth, but they won't. You, however, can trust me — I would never con you." She's trustworthy because she's a good con artist. Give me a break.

As for battling about the Democratic platform, its contents have never mattered to anyone but the delegates at the convention. American parties have no party discipline — every candidate is free to campaign using her or his own set of promises and is equally free to break them. What magic wand would make a better set of empty promises less empty? This is not political revolution.

I also look forward to working with Secretary Clinton to transform the Democratic Party so that it becomes a party of working people and young people, and not just wealthy campaign contributors: a party that has the courage to take on Wall Street, the pharmaceutical industry, the fossil fuel industry, and the other powerful special interests that dominate our political and economic life.     — Bernie Sanders, 6/16 address

I don't understand. The woman has not disavowed her and her husband's critical roles in the Democratic Leadership Council. That's the group which strategized moving the Party to the right in the 1980s, so that it could get more corporate money. Bill headed it then; Hillary was a member while in the Senate.

She has not distanced herself from the first Clinton Administration's strong support for a racist mass incarceration policy. Nor from its continuing the Reagan-era push for deregulation. Nor from its paving the way for the Iraq War by demonizing the Iraqi government, singing the false WMD refrain, conducting overflights and bombings over parts of that country, and imposing murderous sanctions. Nor does she disavow the Wall Street bailouts, war-without-end policies, and too-little-too-late voluntary climate-change goals of the Obama Administration.

What is there to talk to this person about? She is the epitome of what Bernie mobilized us to fight against.

The Campaign Can Support a Revolutionary Movement

I don't know if Bernie, after daily shouting the truth that politics belongs to the billionaire class, is starting to say that the Emperor known as the Democratic Party might be wearing a new suit of clothes after all. What I do know is that sometimes even the best leaders have to have their feet held to the fire by their bases. The campaign did not respond to an appeal to democratize itself. It did not answer a plea to help us organize not only for Bernie's nomination and election, but for building the kind of movement — outside the parties, outside the electoral process — which he rightly tells us in every speech is needed to bring about revolutionary change.

Now some activists, with widely varying perspectives, have posted a signable open letter urging the senator to enable his supporters to find each other and conduct our own dialogues on how to move forward. It suggests alerting them to BeyondBernie.us, a website devoted to that purpose. (Full disclosure: I'm involved in that initiative.)

There are all kinds of views on what needs to happen, e.g., taking over the Democratic Party from below and mobilizing to win elective office, starting locally; building an ongoing movement to put pressure on officeholders to do the right thing; even, as I believe, organizing to gradually build a massive movement that can, in time of crisis, nonviolently topple the billionaire class's rule in a revolution that looks like a revolution.

With the diversity of views among those of us who have backed Bernie's campaign, I submit that he doesn't have the moral right to mobilize us as he has, collect and hold the contact information of millions of us, and then decide on a strategy for us, especially one that seems to contradict the message that drew us in. Given a great deal of evidence of his sincerity, I trust he knows this.

Bernie, please raise your sights to where they seemed to be before Thursday's address! Please decentralize! Please help us find each other! Please help us create forums to discuss and debate strategy! We won't all agree, but we can create different centers that each work at whatever level and in whatever way they see fit.

And when we do, all the currents that emerge can come together to carry us to a true political and social revolution.

Image used with permission of BeyondBernie.us.