In the closed room of the Palace of Conventions an Information Technology conference ended today, one which was accessible only to foreign delegates or Cubans with credentials. As much as I tried to slip into the event, I lacked the association with an official institution needed to be there. As an optimistic preamble to the meeting, the Vice Minister of Informatics and Communications gave an interview to the newspaper Juventud Rebelde [Rebellious Youth]. Full of statements about a vague future that could happen next week or in a decade, he renewed-- in some -- hopes for broad access to the internet. However, after reading the answers of this functionary several times, I'm more alarmed than comforted. 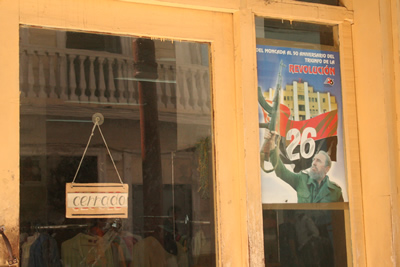 His words do not demonstrate the slightest criticism of censorship or blocking of pages, which is so common on the Cuban networks. He positions ideological differences on a long list of atrocities among which we find, "harmful content such as incitements to terrorism, xenophobia, pornography..." In the same club with these monstrosities he included, "of course, inciting subversion of the established order in Cuba and frankly counterrevolutionary content." The final adjective confirms that our access to the network continues to be lost among a bunch of criteria that has nothing to do with bandwidth or satellite connections.

But it's not worth it to get upset because the Internet will not be a crumb that falls from above, a privilege that we earn by good conduct, nor a benefit realized after applauding a great deal. Not this time. A true revolution.com takes place parallel and contrary to the rationing they want to impose on the virtual world. There are no bearded ones, no rifles, much less a leader shouting from platform. It is slow, and still focused, but it will reach nearly all Cubans. Its commanders carry strange names like Gmail, Wordpress, Skype and Facebook: they do not create divisions but rather unite people.

The effect of this technological revolution will last more than fifty years; to prevent it or impede it there is little the ministers, or the electronic filters or the promises of access that never materialize can do. Even today, while behind closed doors they hold the closing ceremony of Information Technology 2009, already a new gap is opening somewhere, where we can pass without permission.

Yoani's blog, in English Translation, can be read here.

Politics Internet World Censorship Cuba
This Blogger's Books and Other Items from...