Discussions about the influence of social media often remind those on the impact of TV in the 1980s: Everyone has an opinion, some have statistics, and a few others are trying to understand the psychological and sociological mechanisms that lie beneath.

The incredible connectivity amongst people that is provided by social media, combined with the speed at which information is exchanged and its potential global reach, have significantly empowered people. One way to have an estimate of this empowerment is to look at how users managed to "hijack" some social media platforms from their initial use. Twitter and Facebook users provide a spontaneous snapshot of their individual states of minds but, unintentionally, they also turn them into an incredible tool for collective estimates of behavioral dynamics (see, for example, a recent study on happiness) and crowdsourcing. Facebook -- despite its highly criticized IPO -- is on its way to reaching the billion-user landmark and has already changed the way more than 10 percent of the people on this planet interact with each other as revealed by a rich body of research in social sciences. Some people, including the founders of Twitter and Facebook, might have anticipated for all of this to happen. But did they expect the role social media play not only in igniting revolutions but also in modifying how regime change is achieved?

Think about what history will now remember as the Arab Spring. This recent wave of revolutions has yielded some successful and significant regime changes including, so far, Tunisia, Egypt, Libya and Yemen. One year after, established social movements' theories fall short in explaining how both the Tunisian and the Egyptian revolutions occurred. One reason is the influence of cyber-activism via social media platforms that classical approaches tocollective movements do not take into account. Indeed, these two successful popular uprisings are marked by the absence of a clearly identified leader, a political party or figure, an association, or an organizing capacity.

Instead of a leader that would have inspired people and driven them to start -- and achieve -- a revolution, Facebook was the main channel that facilitated and accelerated the Tunisian revolution as repeatedly reported in the news and by many observers. Twitter, too, played a crucial role during the Egyptian revolution. Hence, it is very likely that without these social networking platforms, these revolutions would certainly have evolved more slowly, if at alland would have never reached the global opinion.

But Twitter and Facebook were not ghosts in the machine. They were "just" catalysts to these emerging patterns of popular uprisings. They allowed not only to speed up information exchange but also to provide unprecedented waves of spread. A recently published study that was launched five days after the fall of the Ben Ali regime and lead by our team at Aix-Marseille University & CNRS provides a novel "cyberpsychological" take on how Tunisian Internet users perceive the contribution of Facebook to their 2011 revolution. The method is pretty straightforward. After analyzing a sizeable text corpus from Tunisian Internet users' responses to an online questionnaire, three main clusters were extracted corresponding to what were labeled Facebook's (1) political function, (2) informational function and (3) media platform function.

This study provides a bottom-up approach to these new social uprisings that relied on virtual environments instead of the dominant top-down accounts of "classical revolutions" powered by leaders pulling strings. Accordingly, the interpretation of the results of this study lies on complex dynamical system by invoking the concept of emergent behavior. Indeed, the complex interconnectivity between individuals involved in the revolutionary process within the Tunisian Facebook cyber-activism network -- and the Twitter one in Egypt -- yields patterns of accumulating change.

Hence, the possibility of a leaderless revolution is likely to be (at least partially) explained by the spontaneity, the homogeneity and the synchronicity of the actions of these cyber-activism networks that were catalyzed by social media. This explanation is supported by what we coined virtual collective consciousness (VCC) referring to an internal knowledge shared by a plurality of persons. Coupled with "citizen media" activism, this knowledge emerges as a new form of consciousness via communication tools. The VCC in this study can be seen as an up-to-date version of the Durkheim's collective representation and as being also highly comparable to Žižek's collective mind or to the more recent Boguta's new collective consciousness to describe the computational history of the Internet shutdown during the Egyptian revolution. Accordingly, VCC has to be: timely, acute, rapid, domain-specific and purpose-oriented, which are potential "qualities" of a successful movement (see figure). 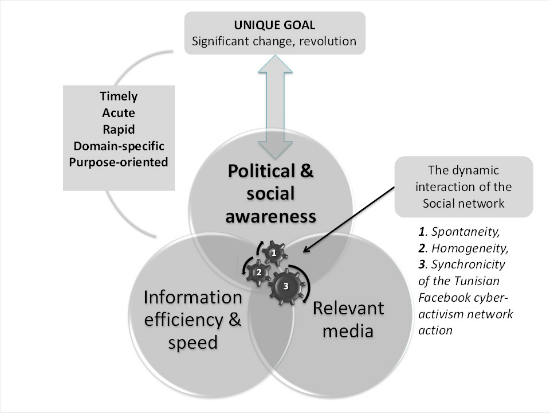 A tentative model explaining the dynamic of the "virtual collective consciousness" (VCC) as a byproduct of complex interactions between Internet users within a social networking platform. Adapted from Marzouki et al., 2012, Cyberpsychology, Behavior and Social Networking, Vol. 15(5), p. 243.

André Panisson and his team provided a dynamic visualization of the network of retweets with the hashtag #jan25 few hours before and Mubarak'sresignation became public. This elegant work is to be considered through the lens provided by the model described in the figure especially when VCC is reaching a momentum of complexity that significantly impacts real-life behavior.

With the deepening of globalization in 21st century, the new geopolitical landscape allows a new vision of democracy where ordinary citizen might be more empowered than ever before to choose an alternative system and change policies. Carne Ross anticipated such global citizen behavior months before the Arab Spring burst out. In his manifesto "The Leaderless Revolution: How ordinary people will take power and change politics in the 21st century," he provides nine principles on how ordinary citizens can regain control of the decisions that directly impact their lives. We support the idea that these principles should be federated around a global consensus shared by citizens.

One of the lessons to be learned from the Arab Spring is that a new breed of revolutions, henceforth called leaderless revolutions, has started, driven by VCC and facilitated by social media. This does not mean that leaders cannot play a significant role in such contexts. Only that, with social media as catalysts, they are no longer a sine qua non condition to successful regime changes.

Yousri Marzouki, PhD, is an associate Professor at Aix-Marseille University where he teaches cognitive psychology and statistical modeling applied to behavioral sciences. After his post-doc training at Tufts University where he studied cognitive neuroscience of visual attention, he is currently conducting research at the Laboratoire de Psychologie Cognitive (CNRS, France) focusing on the relationship between emotion, attention and consciousness. Yousri can be followed on twitter (@YousriMarzouki)

Olivier Oullier, PhD, is a full professor at Aix-Marseille University where he teaches behavioral and brain sciences and conducts research at the Cognitive Psychology Lab (UMR 7290) on social coordination dynamics and decision-making. A scientific adviser to the Center for Strategic Analysis of the French Prime Minister, the World Economic Forum named him a Young Global Leader in 2011 and the vice-chair of its Global Agenda Council on Brain and Behavior in 2012. Olivier can be followed on twitter (@emorationality).

Professor of behavioral and brain sciences at Aix-Marseille University