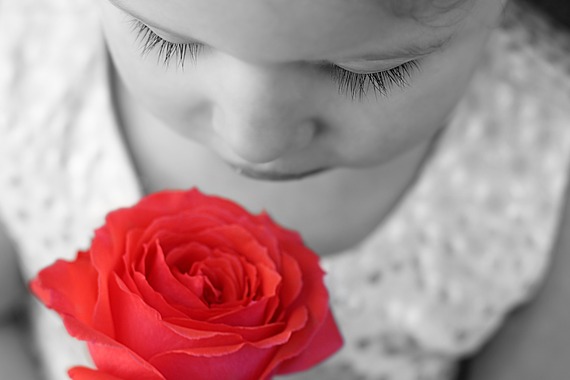 NPR reported recently that Matteo, an eight-year-old boy in Italy, came up with a new word, "petaloso,"--meaning full of petals--which his teacher found "incorrect, but beautiful." With her help, he got in touch with linguists who told him that it could only become an official word in the Italian dictionary if it became widely used. So he started a social media campaign that blew up on Twitter. "Petaloso" isn't an official word--yet. But if enough people start using it, it will.

We are, each of us, the authors of our lives. Through our thoughts and our beliefs, we write ourselves into being. Those thoughts and beliefs may originate with us, or they have been introduced into our emotional vocabulary by well-intentioned family, authority figures, friends, even the media.

And so we create ourselves and our lives, one word and phrase at a time, often without much discernment about where our story began and who authored it. "I'm not good at math," we might say apologetically, after a childhood of being told this repeatedly by our mothers, our teachers, our BFFs. "I look like a blimp," we mourn as we look in the mirror, having been trained by the famous and Photoshop that anyone who weighs more than 108 pounds is unacceptably fat. "I'm the kind of person who (is easily overwhelmed/doesn't handle stress well/puts things off until the last minute/can't seem to stick with anything/insert random unkind judgment here."

As with a new word, like "petaloso," the more we say and think these things, the closer they get to becoming part of our internal dictionary and the more integrated and immutable they feel as part of our life story. Before we know it, we believe without question that we are fat, impatient, too emotional, clumsy, inadequate, or faking it. After all, it's right there in the dictionary. And what we think, we become.

Again: we write ourselves into being.

But if we are the authors of our lives, then we are also the editors. At any point, we can choose to rewrite our story, whether we tweak it just a bit or create a whole new narrative arc.

We can make up new words--new thoughts and beliefs about ourselves and the world around us--and if we use them and act upon them frequently enough, they, too, will be in our internal dictionary. The less we use the words and thoughts that wound us and get in our way, the more they fall out of our vocabulary and out of use. Words get dropped from dictionaries, too.

Katharine Hepburn, writing about Lauren Bacall, penned that, "No zulac from the bazaar has a sharper knife." When told that "zulac" was not a word, she retorted, in her own inimitable fashion, "Well, it ought to be." The article ran as written, "zulac" intact. The word is in the Urban Dictionary now.

What words deserve to be in your vocabulary? Which thoughts and beliefs would you use to rewrite your life?

Perhaps you are beautiful, kind, patient, deserving of happiness. Perhaps you are a zulac. Perhaps, even, you are "petaloso." Choose your words. Make up a few of your own. And use them, use them often. That's the way words get into the dictionary. It's also the way words can change your life.