Warning: Major spoilers ahead -- but really the movie's been out for more than 10 days. Why are you reading Star Wars analysis if you haven't seen the movie yet?

Like much of the world last weekend, I had the sincere pleasure of seeing a brand new Star Wars movie. For an entire weekend (and two viewings), my younger brother and I regressed back to our pre-adolescent (and adolescent) selves, relishing the escape from our now very adult lives and responsibilities.

For us, as with many others, much of our childhood was spent trying to answer life's big questions: does Princess Leia become a Jedi? Do she and Han go on to have children? If so, do they become Jedis? What was Obi Wan doing during his 30 years in hiding? Yadda yadda. The list of exciting mysteries is endless.

It was always these many unanswered and endless open narrative questions, misdirections and the potential for surprise twists ("Luke, I am your father") that made Star Wars extra special and filled our daydreams with plenty of great raw material. I even wrote a final paper in high school that was bookended by references to the mythical tropes of the Original Trilogy.

I've done a lot of thinking about this...

While there are dozens of new questions posed about our beloved galaxy in The Force Awakens, the "white whale" is who is Rey's family? If you're reading this, you've probably already seen the movie, so I won't make a case for why this is so important -- just that we all know how key parentage is to the whole saga. It's the theme of lineage and the passage of the godly force that elevates this series to modern mythology...

I left the theater after my first (and even second) viewing entirely convinced that Rey is Luke Skywalker's daughter. Duh. All signs point to this (the inheritance of the lightsaber, Maz Kanata's cryptic insights, the final scene with Luke, etc). After all, the whole story is about the sins and redemptions of the Skywalker family, right?

"This is not the plot twist you're looking for."


Not so fast. After days of marinating, I'm convinced: that was all misdirection -- too narratively easy for what should be the biggest reveal in this new trilogy. In the following post, I'll make a reasoned case that Rey is in fact Obi Wan Kenobi's granddaughter -- both because of clues planted in The Force Awakens and especially because it would bring the nine episode series to a much more satisfying emotional conclusion; lending more poignance to the earlier films, including the maligned Prequels.

The only two "good guys" in the entire series who have British accents are Obi Wan and Rey (if you exclude C3PO). This likely isn't an accident since other British actors (i.e. John Boyega, Liam Neeson) perform with American accents.

The scene in which Rey persuades her Stormtrooper (007) captor to open her cell door and drop his weapon strongly echoes Obi Wan's successful uses of the Jedi mind trick in both the OT and Prequels -- one of his signature abilities. This is not the plot twist you're looking for.

Poking around Starkiller Base

The scenes of Rey scaling the walls and tip-toeing around the First Order's Starkiller HQ echo Obi Wan in A New Hope sneaking around the Death Star and disabling the tractor beam. A superficial homage to Episode IV or a breadcrumb leading to answers about the Third Trilogy's protagonist?

The only reference to Obi Wan in The Force Awakens comes with the reveal of Kylo Ren's real name: Ben. That climactic moment serves to highlight two key things: 1) a reminder of the overall importance of "Old Ben" Kenobi to the broader Star Wars story, and 2) the notable absence of any references to Obi Wan up until that moment -- the only major A New Hope character not to get a prior visual cameo or major plot point (so we think). This omission looks like a filmmaker's "sleight-of-hand," guiding us away from a reveal about Obi Wan later in the new trilogy.

But the clues continue to pile up, addressed here.

Sure, these are all basic clues that could easily be discounted, but there's ample fodder with which to rack your brain...

"How satisfying would that be to learn that the nine episode arc is really, underneath it all, about the Kenobi family and not the Skywalkers?"


The deeper strain of this "Rey Kenobi theory," however, is rooted in the concept that Star Wars has always had a certain narrative symmetry: good versus evil, light versus dark, small versus big, faith versus technology. Characters even refer to bringing "balance to the force." These patterns abound in the Star Wars universe, appearing again and again in both minor and major ways. Many have even been critical of how closely The Force Awakens mirrors earlier narrative patterns and beats. That criticism is fair, but it's being used for intentional effect to both guide and misguide and play with our assumptions and expectations.

With that said, here are the juicier reasons why Rey being Obi Wan's granddaughter would ring true and be so satisfying to the completion of the story: 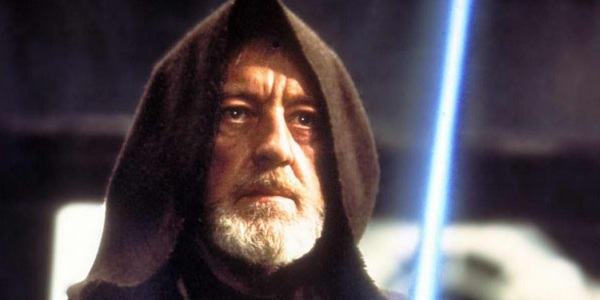 Symbolism of the lightsaber

While the movie seems to imply that Rey's inheritance of Luke's blue lightsaber is a "passing of the torch" from one Skywalker to another, we shouldn't forget who gave Luke that lightsaber in the first place: Obi Wan. The lightsaber had been in Obi Wan's possession for 20-30 years or so between Episodes 3 and 4, and is even presented to Luke from a wood chest similar to the chest later seen in Episode 7 in Maz Kanata's castle-bar (yet another clue). It is Obi Wan's passage of the lightsaber to Luke, along with encouragement to learn the force that propels the entire story forward. This key scene in Episode 4 (arguably the most important scene in all seven movies) even includes Obi Wan's misdirection about Luke's father, a narrative trick repeated in The Force Awakens.

All that being said, think about how much more poignant Episode 7's final scene of Rey handing Luke his own lightsaber becomes if it's again a Kenobi reuniting a Skywalker with their weapon, compelling them back to the fight. Of course we all know that the burden of the lightsaber is now Rey's whether she wants it or not...

Reversal of the mentors

It wouldn't be wild speculation to assume that Luke will now train Rey in the ways of the Jedi in Episode 8. If Rey is a Kenobi (admit it, you're convinced), this would be a profound and emotional reversal of the role of mentor and teacher: a Kenobi training a Skywalker followed by a Skywalker training a Kenobi. Narrative symmetry.

Parallels to Kenobi vs. Skywalker duels

Both Episodes 3 and 4 end with fateful duels between Obi Wan and Anakin/Darth. While there are certainly duels between Skywalkers (5 and 6), I'd suggest that Rey and Kylo Ren's duel at the end of 7 becomes much more dramatic if we eventually learn that they are refighting the battle of their grandfathers, not two battling cousins or siblings.

Depth of Obi Wan as a character

One obvious question that grows from the "Rey Kenobi theory" is: with whom would Obi Wan have had a child? When? Like monks, aren't Jedi's supposed to resist attachments? Despite Obi Wan's significant role in the first six movies, we know surprisingly little about him and what makes him tick. A backstory (uncultivated in I, II & III) about a forbidden love, perhaps, can enrich and deepen his character in surprising ways. It might answer another question: what was Obi Wan doing while in hiding for those 20-30 years before finally connecting with Luke on Tatooine? Maybe he wasn't the lonely hermit that we thought.

The twist of the series

Assuming that Rey isn't just the hero of this new trilogy, but also the character that ultimately brings "balance to the force", the reveal that Rey is a Kenobi and not a Skywalker, as we're being led to believe, would be the twist of the entire nine episode arc.

We're told at many points in the Prequels that Anakin Skywalker was "the chosen one" -- the Jedi who would bring balance to the force. Not only was this obviously false, but in Episode 7 we've essentially learned that Luke has also failed miserably in his attempt to bring peace to the galaxy. Luke's Jedi training of Ben Solo (a Skywalker descendant) was clearly such a disaster that it turned him to the dark side.

In all, the Skywalkers are a pretty mixed bag: powerful, but emotional, petulant and frequently tempted by the allure of evil. It's Ben Kenobi in the earlier episodes that is truly virtuous, noble and pure of heart. He's our true hero. He's incorruptible. He sacrifices himself at the end of A New Hope to show Luke the power of faith in the force, saving him and the galaxy in the process.

Wouldn't it then make complete narrative sense for a Kenobi (Rey) to be the true hero of the saga -- perhaps even saving the soul of another conflicted Skywalker (Ben Solo/Kylo Ren) later in the new trilogy? How satisfying would that be to learn that the nine episode arc is really, underneath it all, about the Kenobi family and not the Skywalkers?

My favorite moment in the series comes in Episode 5 when Luke has abruptly and hastily cut short his training and Force Ghost Obi Wan laments, "That boy is our last hope." Yoda replies, "No... there is another..."

Written originally to be a reference to Leia, how dramatic would it be for the "another" to ultimately mean a Kenobi? After all, we do learn pretty quickly in Episode 7 that Leia never becomes a Jedi. If Rey is a Kenobi and if by the close of Episode 9 she's brought "balance to the force," then all of the previous movies take on a new meaning. Even Obi Wan's Force Ghost from Episodes 5 and 6 takes on a much more spiritual purpose than to just provide convenient story exposition. If Rey is revealed as a Kenobi, it changes the entire paradigm of the series.

While of course the "Rey Kenobi theory" is just a nerdy (very nerdy) theory and could easily be false, in my opinion it's just too potentially satisfying to be ignored. If the narrative patterning (nostalgic borrowing from the OT) from Episode 7 is carried into the next movies, I'm guessing (hoping) this will be revealed in Episode 8 -- the big twist that people will be talking about for days, weeks and years into the future.

Ben Ostrower is the founder and creative director of Wide Eye Creative, an independent digital design agency based in Washington, D.C.