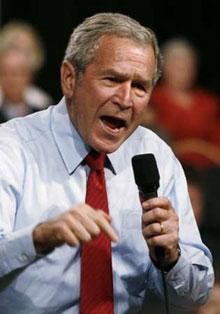 Silvestre Reyes (D-TX), chairman of the House intelligence committee, responded aggressively today to GOP charges that the Foreign Intelligence Surveillance Act was responsible for delays in the search for kidnapped US soldiers in Iraq.

"Republicans are planning to use the kidnapping and subsequent murder of three U.S. soldiers in Iraq earlier this year to put a 'human face' on the issue," Roll Call reported.

But Reyes has pounded back in a memo released this afternoon, calling the GOP plan a "cynical and transparent attempt to use the lives of American servicemembers for partisan political gain."

The "inexcusable delays in the collection intended to save Specialist Alex Jimenez, Private First Class Joseph Anzak, and Private Byron W. Fouty was the fault of internal bureaucratic bungling by the Bush Administration, not the law," Reyes says, citing a timeline produced by the Director for National Intelligence.

"Because of the Bush Administration's bungling, minutes turned to hours," Reyes' office notes in the timeline it released. "And during those hours, the Intelligence Community waited for information on the three missing soldiers."

The full memo and timeline can be read after the jump.

RE: The case of the 10th Mountain Soldiers and FISA

· In a cynical and transparent attempt to use the lives of American servicemembers for partisan political gain, Republican operatives are once again hawking the now-debunked story that the Foreign Intelligence Surveillance Act caused a delay in surveillance intended to help locate missing soldiers from the 10th Mountain Division in Iraq. This is simply not the case.

· The RESTORE Act, HR 3733, will eliminate the requirement to obtain an individual warrant, based on probable cause, for targets outside the U.S. The RESTORE Act will solve the problems identified by the soldiers' case.

· For hours when surveillance should have been up and running, the Administration did not respond, and the intelligence officers ready to start surveillance sat and waited for the political appointees to sign off.

· At the request of Chairman Reyes, the Director of National Intelligence issued an unclassified timeline on the case. This timeline makes clear that the inexcusable delays in the collection intended to save Specialist Alex Jimenez, Private First Class Joseph Anzak, and Private Byron W. Fouty was the fault of internal bureaucratic bungling by the Bush Administration, not the law.

· On May 12, 2007, after a coordinated attack on their position south of Baghdad, three U.S. soldiers were reported missing and believed to have been captured by Iraqi insurgents. Immediately upon learning of the attack, theater-based and national SIGINT assets responded by dedicating all available resources to obtaining intelligence concerning the attack.

· On May 13 and 14, 2007, the Intelligence Community began to develop additional leads concerning the communications of insurgents claiming responsibility for the attack, including approaching the FISA Court on May 14 for an amendment to a then-current order with some bearing on the hostage situation. The amendment was granted that day.

· As soon as specific leads had been identified, analysts began to compile all the necessary information to establish the factual basis for issuance of a FISA court order as required by the emergency authorization provision of the statute.

o At 10:52 a.m., the NSA notified the Department of Justice (DOJ) of its desire to collect some communications that require a FISA order. It was determined that some FISA coverage already existed.

o At 12:53 p.m., the NSA General Counsel agreed that all of the requirements for an emergency FISA authorization had been met for the remaining collection of the communications inside the U.S.

Collection could have started immediately - the requirements of the statute were satisfied. As James Baker, head of the FISA office has testified to Congress, emergency authorization can take place in minutes and can be granted orally.

NSA, ready to begin surveillance, waited for Bush Administration approval. Why were they engaging in legal wrangling for more than 5 hours?

The law allows four officials to grant authority to conduct emergency surveillance: the AG, the Acting AG, the Deputy AG, and the Assistant AG.

The AG was out of town. The Acting AG had left the building. The Deputy AG (Paul McNulty) had resigned the day before. As for the Assistant AG, Congress had authorized the Assistant Attorney General in charge of the National Security Division to grant authorizations - but the Justice Department had not yet altered its own internal regulations to allow him to do so. DOJ did not alter its internal guidelines until June 12 - a month later.

After striking out with all four DOJ officials, the decision was made to try to call AG Gonzales in Texas.

Why didn't he grant oral approval at that time?

Why did it take him two hours to call back?

o At 7:28 p.m., the FBI noticed key intelligence agencies and personnel of the approval.

In September, the Committee took testimony from Jim Baker, former head Office of Intelligence Policy and Review at DOJ - the office responsible for FISA. Baker testified that in true emergencies, FISA surveillance could be approved in minutes. Because of the Bush Administration's bungling, minutes turned to hours. And during those hours, the Intelligence Community waited for information on the three missing soldiers.