The cigarette industry, like many of its customers, is gasping for air. And now it's turning more than ever to racial targeting to survive.

Reynolds American, the No. 2 U.S. tobacco maker after Altria, on Tuesday announced a deal to buy No. 3 cigarette maker Lorillard for about $25 billion. It would be the latest, and one of the biggest, in a string of mergers in reaction to regulatory crackdowns and the long decline of smoking.

At first, it seemed the big prize in the deal would be Lorillard's popular e-cigarette brand Blu eCigs. The "vaping" trend, if it continues, could extend the lifespan of companies whose main products are now colloquially known as “cancer sticks.”

But Reynolds has agreed to sell Blu to British rival Imperial Tobacco to stave off antitrust regulators. That suggests the real gem is something else: Lorillard's menthol cigarette brand, Newport, which is marketed heavily to African-Americans.

Two spokeswomen for Reynolds did not immediately return calls for comment.

Newport sales have helped Lorillard's share of the total cigarette market grow steadily, from 10.6 percent to 13.2 percent between 2009 and 2012. During that time, Reynolds' share of the market has shrunk.

Reynolds CEO Susan Cameron flagged her interest in Newport after announcing the deal, telling CNBC that "Newport actually has been on a true growth trajectory, and over three decades it has continued to grow in market share.”

It's a rare success story for the industry. Just one in five adults in the U.S. smokes, according to a 2012 Gallup poll. That is down from 45 percent in the 1950s, and smoking has been declining steadily for decades.

Reynolds has long known it had a shrinking customer base: A Reynolds executive once infamously told a New York Times columnist that the only people who smoked were “the poor, the young, the black and the stupid.”

Two decades later, Reynolds is banking on the continued loyalty of that third demographic to anchor profits.

Beginning in the 1970s, Newport marketed heavily to a black audience, and years of targeted advertising are still paying off. In 2012, Newport was the leading brand of cigarettes among nearly 74 percent of black youths aged 12 to 17 and almost 79 percent of black young adults aged 18 to 25, according to the Campaign for Tobacco-Free Kids. 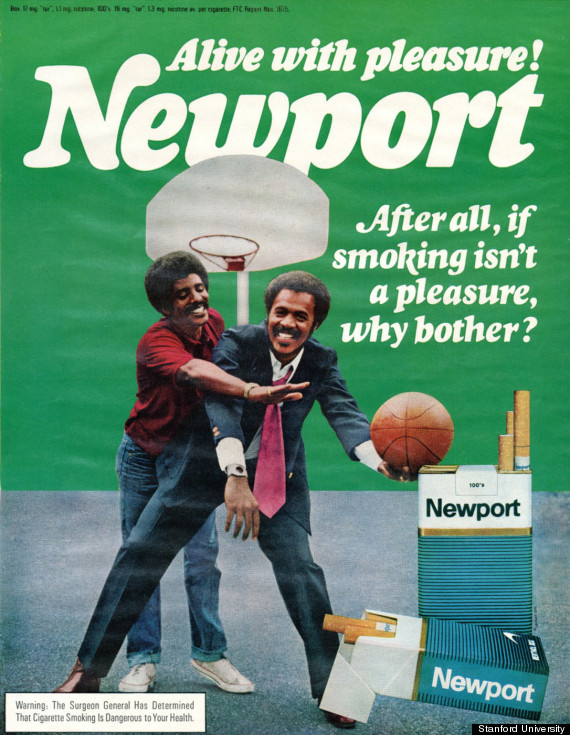 “They’re really in a sweet spot of the industry,” Philip Gorham, a senior equity analyst at Morningstar, said of Newport. “It has a very specific demographic, it’s highly popular among African-American smokers.”

One danger for Reynolds -- beyond antitrust regulators stopping the merger -- is that the U.S. Food and Drug Administration could ban menthol flavor.

The FDA has already banned other candy flavors, but hasn't yet decided whether to ban menthol. The agency is "currently considering" comments, data and research on the issue submitted in July 2013, spokeswoman Jennifer Haliski told The Huffington Post, and there's no deadline for the FDA to act.

Gorham said such a ban is unlikely. Regulators might restrict the marketing of menthol cigarettes, but politicians are unlikely to take on the industry’s muscular lobby for the sake of one demographic, Gorham said.

"I don’t think politicians have the appetite to ban menthol,” said Gorham. “But if I’m wrong, and menthol gets banned, that’s an absolutely horrific outcome for Reynolds.”

Even then, cigarette companies will likely keep adapting, as they always have -- by merging, selling new products and expanding to new markets.

“It's hardly disappeared, it's just that rich people aren't smoking anymore," Robert Proctor, a Stanford professor who has chronicled the history of the tobacco industry in his book Golden Holocaust: Origins of the Cigarette Catastrophe and the Case For Abolition, told HuffPost. “This business is going downhill eventually, but they still sell 6 trillion cigarettes worldwide."