Candidate Clinton's speech today was another progressive salvo regarding the importance of addressing income inequality; ostensibly through a higher minimum wage, banning innovative business models like Uber and AirBNB, being tougher on Wall Street, taxing carried interest, and a host of other progressive favorites. The speech on "middle class economics" also featured attacks on the putative economic policies of conservative rivals.

This raised (at least for me) the question: what is the record on inequality. To find out, I went to the Census Bureau data on household income and downloaded the data on the Gini coefficient. (You can find the data here.)

The Gini coefficient is one of the most widely used measures of income inequality. A Gini coefficient ranges from zero to one, with a value of zero indicating perfect equality (i.e., where everyone has the same income). At the other extreme, a Gini of one indicates perfect inequality; that is, when one person has all of the income.

As inequality shifts, the Gini coefficient changes. Increases in the Gini document rising inequality, while decreases reflected a more equal distribution of household income. To focus on the supposed differences in policy philosophy, I computed the (percent) changes over 1989-1992 (the term of George H.W. Bush), 1993-2000 (Bill Clinton), 2001-2008 (George W. Bush), and 2009-2013 (the data available for Barack Obama). The results are displayed in the graph below. 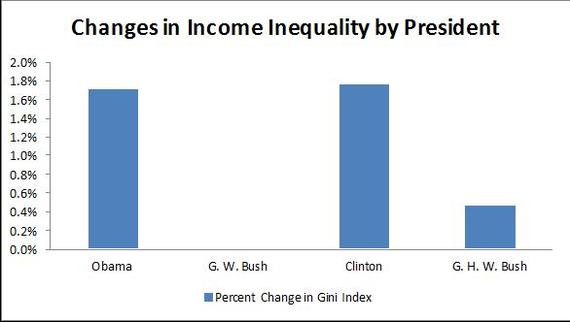 The facts belie the rhetoric. Inequality rose most under the more progressive presidents and least under the conservative ones.

How does this happen? The economic lifeblood of the middle class is labor earnings and the central tenet of raising middle-class incomes - the number one priority at the moment - is increases in (inflation-adjusted) earnings.

On this front, the record is not promising either. The next graph shows the average annual growth rate of real (inflation-adjusted) average hourly earnings. While the performance under George H.W. Bush probably explains why he is the only 1-term president in these data, the remainder of the comparisons is decidedly bad news for the most progressively oriented policies (Obama) versus conservative approaches (Bush). Bill Clinton falls in between in philosophy and performance. 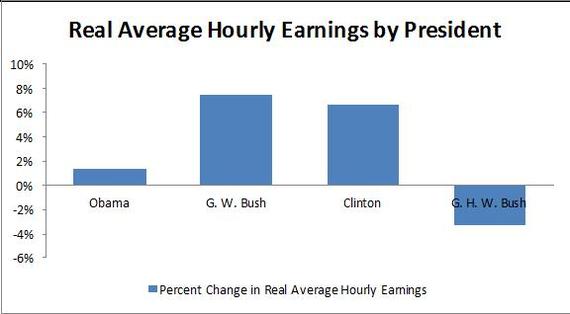 This straight reading of the record raises the fundamental question: if the core of progressive policies did not succeed in raising wages and lowering inequality for the past six years, why should the voters have any interest in suffering for another four to eight?