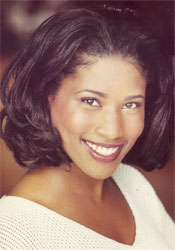 Six months after the birth of her first child, Chaunté Smith couldn't get out of bed. She was in "excruciating pain." At first she thought it was the result of being an "older mother," having given birth at 36. In the mornings, her fingers were curled. As her knees became swollen, she began to limp.

Telling me about her experience, Smith admitted, "I ignored it for a little while, as we women do, and just got on with my life." Now, eight years later, Smith has become part of a team working on an awareness campaign called "The Strong Woman's Approach," featured through Reach Beyond: Everyday Solutions for Living With Rheumatoid Arthritis. Smith is sharing her personal experiences with the goal of giving other women courage and insights.

Rheumatoid arthritis affects 1.3 million Americans, and is two to three times more common among women. It is a chronic disease that affects the joints, primarily those in the hands, wrists, feet, shoulders and knees. Pain is accompanied by tenderness, swelling and redness of the joints -- a warning sign that they are being attacked. Other indicators can include low-grade fevers and fatigue.

Smith, who comes out of a background in the pharmaceutical industry, intuited that something other than first time motherhood was at play. She said, "I could barely walk. I couldn't pick up my newborn." She connected with a rheumatologist, and in tandem they determined what her course of treatment would be. Smith knew that she wanted to have a second child, and her choice of medications was informed by that fact.

Over time, Smith learned how to adjust to her illness through a combination of medication, exercise and diet. Proper lifestyle choices are an issue that Smith is working to amplify. She underscores that food rich in Omega-3 such as dark leafy vegetables, coldwater fish and vegetables can make a huge difference in well being. Conversely, Omega-6 rich beef and chocolate have an inflammatory effect on the body's system.

Smith did extensive reading and research to give herself as much knowledge as possible. "You have to find out what works for you," she told me. "The disease can take over your life if you allow it to." Explaining how the pain had impacted her both physically and emotionally, she related that there were times she "couldn't put the car key in the ignition." Unsurprisingly, she became frustrated and cranky from the pain. When I asked her if women would be aware of potential symptoms -- in order to seek out medical help -- she replied, "The pain is so excruciating you will know. You can't even flip a light switch."

Warned that if she had a second child, the rheumatoid arthritis could intensify. Smith was not deterred. She became very sick after her delivery, and when she had completed six weeks of breast-feeding, she resumed her regimen of medication. Her youngest daughter is now four.

Currently, Smith describes her illness as "better," appending the statement with, "I still have my painful moments." She combines family and work with speaking about rheumatoid arthritis -- to foster support, information dissemination, and community building. Injecting a bit of humor into the conversation, she remarks, "People with RA all have the same story of how you have to slide out of bed!"

Stressing the need to be proactive, whether asking questions or finding a doctor you can connect with, Smith reiterated the importance of immediate intervention. This action gets the disease under control in the preliminary stages, thereby preventing long-term joint damage. Her advice to other women was straightforward and simple. She said, "Don't beat yourself up. Take care of yourself first. It's okay to have a cup in the sink. Get your diet and exercise plan together."

Joining with Smith to help women dealing with rheumatoid arthritis is Dr. Pamela Peeke, an author and member of Oprah's team of medical experts. She has contributed her expertise through a series of videos devoted to dialogues on exercise and coping strategies. When I spoke to her by telephone, she drilled down on the premise behind the outreach. She qualified it with one word: Hope. "People feel overwhelmed and defeated by rheumatoid arthritis. They ask, 'How is this going to impact my life?' They need to be reasonable and realistic." Peeke insisted, "People can still do stuff, they just have to know how to do it." A patient needs to understand herself and be reasonable about flare-ups."

Women can be affected by RA as early as in their 30s. Peeke described how women are more vulnerable to autoimmune diseases because of the sensitivity of their immune systems. "Pregnancy can kick-start a dormant autoimmune disease," Peeke said. Walking through a series of steps to take, Peeke advised that women need to be their own advocates. This starts with having an internist do a blood test looking for the "rheumatoid factor." Once you receive a diagnosis, get a team together spearheaded by a rheumatologist, making sure that you have a physical therapist on board.

Peeke underscored that it was essential not to feel defeated during flare-ups, but rather to use the episodes as a roadmap to learn about the disease and individual patterns. She said, "Be patient. It can be depressing if you don't know what's happening." Peeke pointed to a customized exercise regimen as essential to a comprehensive routine. She said, "Don't stop moving! It's the worse thing you can do." She also targeted junk food as a culprit for increasing inflammation. Instead, she advised concentrating on ingesting whole grains, vegetables, fruit, plant based nutrients and fish.

In tandem with her food and physical exercise recommendations, Peeke is a strong supporter of meditation. She characterized the practice as "the best way to regroup and be centered; to close your eyes and let it be."

Both Smith and Peeke believe that the most important thing for women with rheumatoid arthritis to realize is that they are not alone. With proper treatment, support and a programmed approach, they can regain a sense of control.

That knowledge, in itself, can be of major consequence.

This article originally appeared on the women's health site EmpowHER.