Airlifting a rhinoceros by its ankles might not sound like the most humane of acts, but in this situation, it's saving the critically endangered species.

The technique, which produced these amazing photos below, actually helps to move the large beasts safely and effectively.

A relatively new capture technique was used to airlift some of the rhinos out of difficult or inaccessible areas by helicopter. This entails suspending the sleeping rhino by the ankles for a short trip through the air to awaiting vehicles. "Previously rhinos were either transported by lorry over very difficult tracks, or airlifted in a net. This new procedure is gentler on the darted rhino because it shortens the time it has to be kept asleep with drugs, the respiration is not as compromised as it can be in a net and it avoids the need for travel in a crate over terrible tracks," explains Dr Flamand. "Another advantage is that rhinos can be more easily removed from dangerous situations, for example if they have fallen asleep in a donga or other difficult terrain after being darted. The helicopter translocations usually take less than ten minutes, and the animals suffer no ill effect. All of the veterinarians working on the translocation agreed that this was now the method of choice for the well-being of the animals."

This past September, South African and Vietnamese officials met to discuss rhino poaching. At that time, the Associated Press reported that Vietnamese officials said more needs to be done to fight the myth that rhino horns can cure cancer. As of then, 309 rhinos had already been poached in South Africa since the beginning of the year. In late October, the last Javan rhino in Vietnam was reportedly killed by poachers who wanted its horn.

Check out the slideshow below to see the stunning shots of a rhino in transport, courtesy of Green Renaissance. 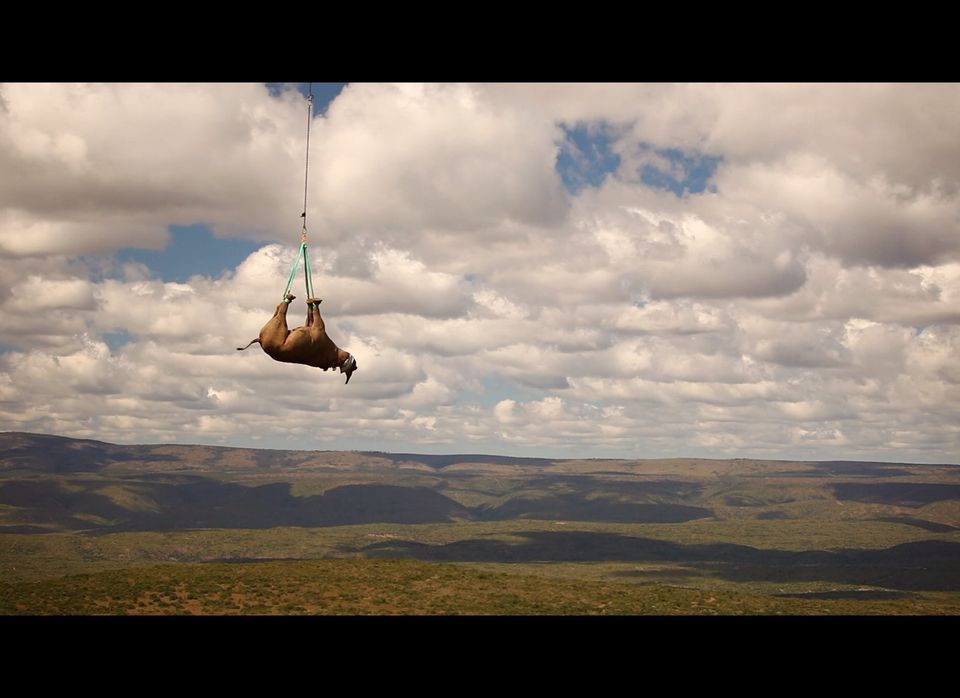 1 / 6
Black Rhino Given A New Home
Black rhino being transported by helicopter to an awaiting land vehicle. The helicopter trip lasts less than 10 minutes and enables a darted rhino to be removed from difficult and dangerous terrain. The sleeping animals suffer no ill effect. <strong>Green Renaissance - <a href="http://www.greenrenaissance.co.za" target="_hplink">www.greenrenaissance.co.za</a></strong>