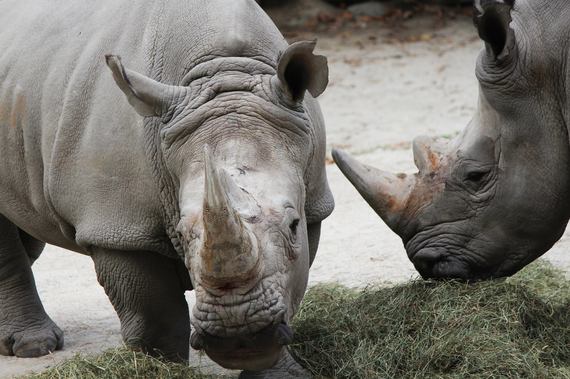 Royals Prince William and Duchess Kate are helping to direct a spotlight on one of the oldest-living and greatly endangered mammals on the planet with their recent visit to India's Kaziranga National Park. The world heritage site is home to two-thirds of the world's population of the endangered one-horned rhino -- only 3,600 Indian or greater one-horned rhinos are left on Earth. Even more alarming is that only 29,000 Rhinos exist on the planet and the number is rapidly decreasing. More accurately, there are 20,000 white rhinos, 5,000 black rhinos, 200 Sumantran rhinos, and fewer than 50 Javan rhinos left. At the current rate, rhinos as a genus will be extinct in the wild by 2025. That's less than ten years from now.

Prince William and Duchess Kate were allowed to feed an orphaned baby rhino -- nothing can pull at your heartstrings more than this experience. Times have certainly changed since Prince William's grandfather, Prince Philip, and Queen Elizabeth visited in 1961, shot a tiger and posed with it. Now, the campaigning conservation prince is looking to exploit the intense interest of his visit to draw the world's attention to the plight of the rhino. And with Earth Day just next week, the timing couldn't be better.

These rhinos are not becoming extinct due to environmental issues or something of natural causes. The largest impact and threat to the rhinos is the critical levels of poaching. They are being killed, illegally, for their horns nearly every seven hours. In fact, only hours after Prince William and Dutchess Kate left India's Kaziranga National Park, a rhino was killed for its horn.

The illegal trade of rhino horn is at a crisis level. The black market value of rhino horn is now high enough that some natural history museums have suffered from thefts of rhino horn. The primary markets for rhino horn at the moment are in Asia, with Vietnam as a top consumer. China has made trade in rhino horn illegal, however there is still a strong black-market presence. There are a number of uses for rhino horn in these countries, some of them spiritual, but much of the horn illegally traded is used in traditional Chinese medicine. The horn is used as a cure for hangovers, fever reducer and as an aphrodisiac. Some consumers believe that ingesting the rhino horn may promote greatness and increase your own spiritual nature of rhino. When the president of Vietnam announced that rhino horn cured his cancer, the rhino horn trade skyrocketed. What they don't understand, or choose to ignore, is that rhino horn is merely keratin, the same protein substance that you find in your hair and fingernails.

Perhaps you're wondering now why, with so many other environmental concerns, are rhinos so important?

Losing the rhinos would dramatically reshape the landscape. Rhinoceros are huge mega-herbivores. By mowing down grasses, small trees and shrubs they open up access for other species to thrive. Rhinos are considered an umbrella species -- meaning they are large, long-lived and require a lot of habitat. Umbrella species, as the name implies, provides protection for other species using the same habitat. Conservation of the rhinos effectively protects many habitat types and the many species that depend on those habitats. Some species of rhino may live over 50 years so when you save a rhino, you are saving an ecosystem.

I grew up in a zoo, quite literally, at my family operated zoo in Massachusetts and we have two southern, white rhinos -- Thelma and Louise -- in our residence. Our nonprofit, EARTH Ltd., provides environmental and conservation education with an emphasis on animal ecology, endangered species and threatened habitats. If more people learn and share information about rhinos we may be able to help save them. When a species like the rhino goes extinct we are changing an ecosystem's future, and the lingering effects could be devastating to our planet.

Betsey Brewer is the Executive Director and Founder of EARTH Ltd., the nonprofit arm of Southwick's Zoo in Mendon, MA.