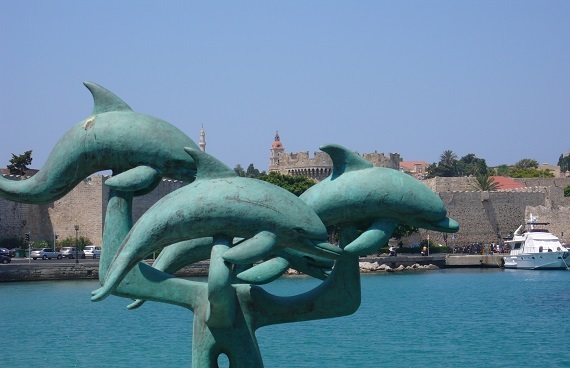 Entrance to the harbor where the Colossus might have stood.

Passengers joke about the one thing they know about Rhodes as they come ashore on tours of this island off the southern coast of Turkey. "How many Colossuses does it take to screw in a lightbulb?" quips one. Another chuckles, "I wonder where the Wonder is."

Many visitors are disappointed to learn that there's nothing left of the island's famous Colossus of Rhodes. Not even some rubble where one of the Seven Wonders of the Ancient World once stood. What's more, beyond historical accounts that the giant existed, we don't really know what it looked like.

Still, sailing by the old harbor's entrance, it's easy to conjure up the iconic sight of the Colossus towering over 300 feet high - about the height of the Statue of Liberty - with one foot planted on each side of the passage. 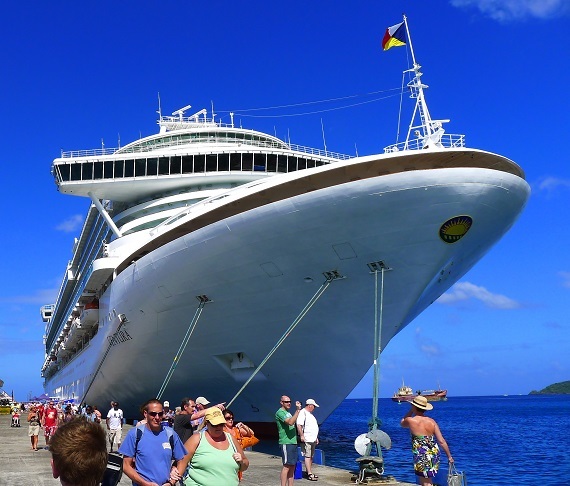 Rhodes is one of Greece's most popular cruise ports.

Today, smaller boats slip through the harbor's relatively narrow (and untopped) passage to dock in the harbor. The big cruise ships saddle up to nearby piers.

"True, the Colossus is long gone," says tour guide Manos Mitsakos, "but there's still plenty of fantastic things to see on the island, not the least of which is the stunning medieval city we now call 'Old Town.'"

Settled by the Minoans in the 16th century B.C., the island, just 12 miles off the southern coast of Turkey, fell to the arrows, swords, scimitars and cannons of a succession of conquerors over the years. Among flags that flew over Rhodes were those of the Greeks, Persians, Romans, Byzantines and - after the fall of Jerusalem to Muslim forces in 1291 - of the ousted Christian Knights Hospitaller, better known as the Knights of St. John. 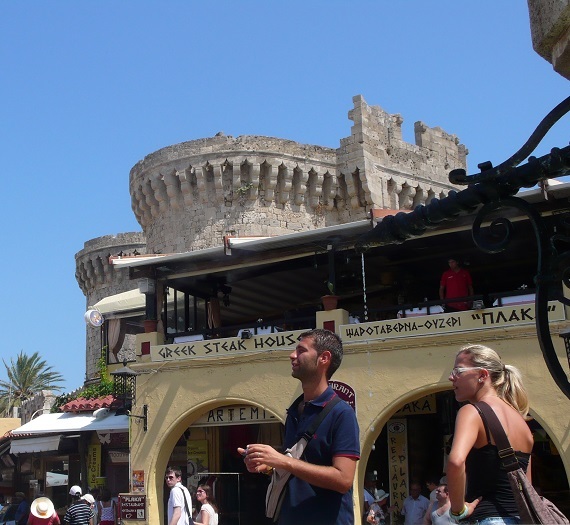 Old Town is protected by castles and forts.

Mitsakos says the island's name came from tales of Rhode, girlfriend of the legendary Greek sun god Helios. The Colossus is believed to have been a statue of Helios.

The three sections of Old Town were once home to 100,000 Christians, Turks and Jews. Today the town is typically packed with thousands of tourists roaming around its castles, fortresses, gun turrets, museums and shopping lanes. Said to be one of the oldest inhabited medieval towns in Europe, the city of 200 nameless, meandering streets and lanes is also one of the easiest to get lost in.

Among must-see spots in Old Town is the towering Palace of the Grand Masters, which was built by the Christian knights in the 14th century to defend the city against Muslim invaders and later against Barbary pirates from North Africa. One story says the knights themselves became pirates and preyed on shipping criss-crossing the nearby sea lanes from Egypt, southern Europe and the Holy Land. 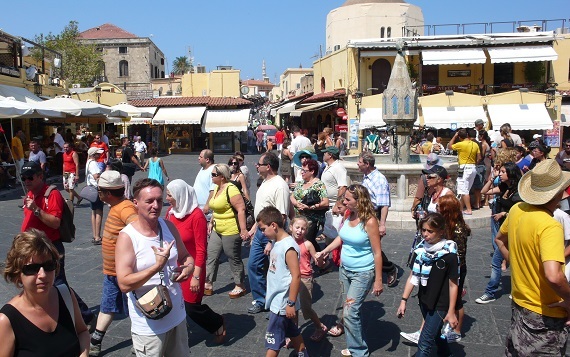 Elsewhere on the 50-mile-long island (it's about half that size wide) you'll find tourists scampering around an ancient acropolis overlooking the sprawling city of Lindos (named for one of the children of Helios and Rhode). Up in the ruins are such sites as the Temple of Athena, the Castle of the Knights of St. John and the Greek Orthodox Church of St. John.

Visitors dribble back from the inland tours in time to stroll around Old Town to sample Greek delicacies in everything from gourmet restaurants to the Rhodian versions of McDonald's and Pizza Hut. After that, some go back to their hotels while others head to their ships for the next leg of their cruise. Often, that's a quick 70-mile sail up the Turkish coast to the shopping mecca of Bodrum and the probable location of yet another missing Wonder of the Ancient World, the Mausoleum at Halicarnassus. 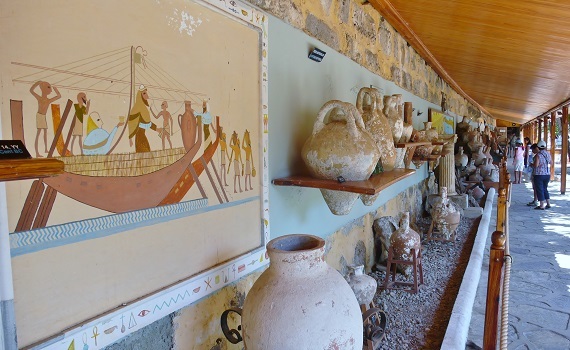 Pots are a good buy on the Turkish coast.

About the other five Wonders: Like the Colossus and the Mausoleum, all we know are the general locations of the Hanging Gardens of Babylon, Egypt's Lighthouse of Alexandria and the Statue of Zeus in Olympia in western Greece.

Of the other two, there's a portion of a Wonder about 100 miles up the coast from Bodrum at the Greco-Roman ruins of Ephesus, a short bus ride from the cruise port of Kusadasi. There, the immense temple of the Greek goddess Artemis (twin sister of the super-god Apollo) was said to soar "as high as the clouds." But all that's left of the temple are a few pieces of one of its columns.

Guess what and where the only remaining Wonder is. Hint: It's about 450 feet high, and it's made out of 2.3 million stone blocks. Need another clue? It's near Cairo.

Getting there: Besides day-trippers from cruise ships, a large number of Rhodes' visitors come on smaller ships and planes to stay for a day or two during tours of the Aegean islands and the Turkish coast. Many of the tours start at Athens or in Istanbul or jump off from smaller cities on the coast.