The movie Looper features a lot of extreme, graphic, realistic-looking and definitely not satirical violence. Torture, mutilation, executions, loads of bang-bang, women blasted in the guts, and the murder of a child. Plus more gun-fetishizing than in small-town Pennsylvania on a Saturday night. The studio should be okay with me mentioning these details, because although this may not be the cup of tea for many (myself especially), just as many will get their panties in a bunch running off to slosh through the carnage. Step right up. 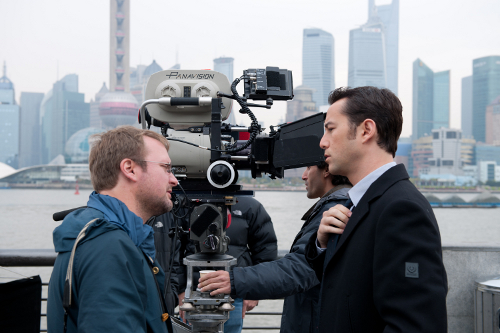 Personally, I'm trying to get a handle on Looper. (Is it a tribute to George Hickenlooper? Is it about an ADR artist?) I love science-fiction. Sometimes it's brilliant; sometimes it's not; usually it's fun. A quarter-century ago, the question of "What's 'fun'?" arose, with the release of RoboCop: a brutally violent sci-fi movie which also strove to meld pathos and mirth into the mix (with varying results). Five years prior, Harrison Ford blasted Joanna Cassidy in the back and Daryl Hannah mid-gymnastics, in Blade Runner -- and I understood it (and dug it while Ebert panned it): they were really renegade robots, not humans -- but director Ridley Scott nonetheless fetishized those moments to create a dubious art-piece. And of course I'll let the Kubrick minions prattle about the theme of A Clockwork Orange in the comments, below.

Looper is not subtle, however its script is smartly assembled, leading to a third act much more compelling than the first -- and how many films today can make that claim? The gist is that the eponymous employee (Joseph Gordon-Levitt, made up like Shia LaBeouf but deftly smirking and rasping like Bruce Willis) is a hard-partying low-end hit-man in near-future Kansas, disposing of mob targets from 30 years hence, sent back in time to him via illicit means, to avoid detection. Like many thugs, he fancies himself sophisticated and intellectual (wears antiquated ties, mildly mangles French), and reports to bearded boss Jeff Daniels, who steals the movie with a couple of one-liners (example: "I'm from the future; go to China!"). He also becomes emotionally and otherwise attached to two trendily-tough blondes (Emily Blunt, Piper Perabo) whom I thought were the same character (sorry: I can't tell blondes apart), but then, er, stuff gets real: His elder self (the actual Bruce Willis) gets shipped back to him for execution. That's bad. What to do?

I spoke with writer-director Rian Johnson about his movie. Is science fiction a portal to human understanding?

"I think so, yeah!" the director enthuses. "It really is like an amplifier. It gives you a megaphone, basically, to take what, in a drama, might be a small moment between two people, and to make that huge. And through being outlandish, the audience has to process it in a bigger way."

I ask if it's the same as fairy tale and fable. Rian responds: "It's really similar. I think if there's one thing that sets it apart, it's because it has this veneer of fake science over it, so it's maybe a little more acceptable to our modern sensibilities. In the same way, you could equate it to mythology. It does the same things that the gods and monsters in the Greek myths do."

We turn to the science itself. Looper is tight. But like any time-travel story, it begs to be assailed with technical questions. For instance, these machines in the future can send a body back to a plastic sheet in a cornfield with pinpoint precision. Does Rian know how they work?

"Yeah, I do," he responds, clearly well prepared. "And more than that, I know the rules of how it works. In terms of what actually drives the machine, I could make something up on the spot!" he laughs. He elaborates on the specs (a fixed 30-year tuning, for instance), then adds: "On one hand, the sci-fi nerd in me feels there's a danger not explaining it, because it can look like plot-holes. On the other hand, the story guy in me is like, 'You know why that's there, and that's not what's important to the story.' It can be murder to start suddenly stamping out all these little explanations with two-sentence lines, and suddenly your movie is filled with all this dumb-ass exposition about stuff you don't really care about." Rian cares about what serves the story. 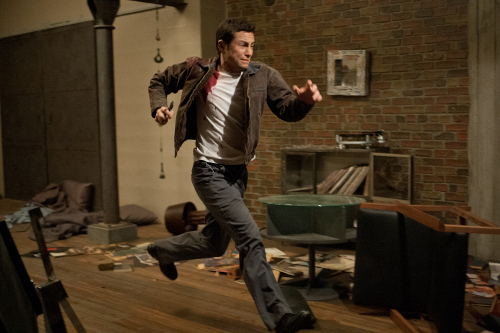 Joe shows off his Looping skillz.

We consider the performances. On press day, Joseph Gordon-Levitt and Noah Segan have already charmed us. I ask their director about working with highly unsympathetic characters, particularly the lead. Rian segues to a classic.

"My main model -- and this by the way is why the movie's nightclub is named La Belle Aurore -- my main model was Rick in Casablanca: going from, 'I stick my neck out for nobody' to [spoiler here]. It was something that, in the writing, I was really conscious of building into it: I wanted part of the rollercoaster feeling of the movie to also be, 'Who am I emotionally invested in? Who do I want to win? Who do I think is right?'

"It was important to set up, especially in the beginning, that Joe is acting for selfish reasons. Because when Old Joe shows up -- and also because it's Bruce Willis showing up -- you want to leap on board and say here's the man with the plan, here's the man who knows what's going on. And then of course when you see what the plan actually entails, things start to shift in unexpected ways."

Indeed. (Attention, girls who like "bad boys": uh, check out Willis here. Bad enough for ya?) Aesthetically, Looper is way too violent for my tastes (ironically, Rian says he wouldn't want to make a horror movie; though this qualifies), and naturally I ask him, why so harsh?

"Because I wanted the violence to have that kind of impact," he explains (probably not for the first time), "because for me that was essential to getting where we get at the end. The whole thing started with this question of violence as a problem-solving tool. Not just the moral issues, but the practical issues of fixing a problem by finding the right person and killing them, fixing a problem through violence, a live-by-the-sword type thing.

"For me, getting to the part where the redemption comes, and the sun breaks through the clouds -- the power of that, and the true impact of that, is only felt in relation to the darkness in the first part. That's how my head's wrapped around it."

Looper is now looping in your looperhood.